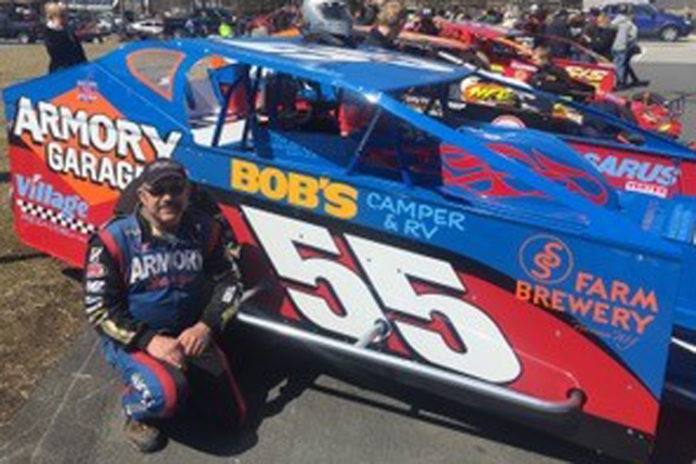 Lebanon Valley veteran Modified driver Mike King turned an idea into the first annual King Fisher car show on Sunday in his hometown of Nassau. It also turned out to be the unofficial kick off to the Lebanon Valley racing season for many.

“I had been thinking about if for a year, said King, and finally got up the courage to ask the manager of the local Stewart’s Shop.” On Sunday King was overwhelmed with the turn out and the fact that Lebanon Valley promoter, Howard Commander came made it the official kick off for the track just a few miles down the road.

Fans and drivers came from as far away as Connecticut to participate and enjoy the camaraderie of the racing fraternity. King said he felt that Nassau has always been a big part of Lebanon Valley and the local Stewart’s was the perfect place for the show. One thing that impressed us and was mentioned by several in attendance was the drivers wearing their driver’s suits. It was something that King asked all drivers to do and they obliged.


There was no more room for race cars that circled the outside of the Stewart’s parking lot and gas pumps. Stewart’s manager, Andy Basile was busy cooking hot dogs while his employees were inside serving up coffee, snacks and ice cream.

Lebanon Valley Pro Stock driver Jay Corbin has a second car this season and will run the Super DIRTcar Series for the first time adding 13 more events to his 2017 season. The second car will have the same dedicated sponsors and is currently about 90% ready to race. Corbin began his racing career in the Rookie Pro Stock division at the Valley and did pretty well, chalking up two wins and ending the season second in points. He has since recorded three track titles in the Pro Stock division. Lebanon Valley 2016 Pro Stock champion, Rob Yetman stood next to his brightly painted No. 7 and shared the photo opt with Howie Commander. Yetman also went on to win during Super Dirt Week at Oswego this past fall giving him the distinction of being the first winner on the Oswego dirt. Yetman is the only four-time winner in the Pro Stocks at Super Dirt Week, three wins on the mile at the fairgrounds and once at its new home in Oswego. Rob will once again follow the Super DIRTcar Series and the King of Dirt series along with running regularly on Saturday night at Lebanon Valley. Multi-time track champion Kenny Tremont was one of the drivers that came to support King and as always is popular with the fans. Tremont took advantage of the casual atmosphere of the event and spent the day talking with fans inside and outside the Stewart’s Shop.

We found Modified chauffeur Chad Jeseo standing near his new PMC Chassis that he will debut on opening night, April 22nd. Jeseo will also have a TEO chassis available as a back up and to run the Super DIRT Series tour this season. Jeseo’s TEO chassis is the former J.R. Heffner small block car.

Sitting on the front of the No. 43 Modified was Keith Flach’s dad, John, also a former Lebanon Valley champion. John said the team will race at Lebanon Valley and Albany Saratoga again this season along with another year on the Super DIRTcar Series. The team is feeling confident this year with the motor program and the whole team in general. He also recalled Keith’s run at Oswego last fall and said he thought they were very competitive and it was unfortunate they broke near the end of the event. John also said he felt that DIRTcar did all they could with the surface for the time they had and hopes they may have more time this coming fall.

Tim Hartman, Jr. will run Fonda and Albany Saratoga on a regular basis this season. The team also has a third car to run and what they decide to run will be determined by the time they have. The will just play in by ear and see what happens.

Over the years we have heard many people talk about what should and shouldn’t be. On Sunday Mike King showed us what could be. Congratulations, Mike.