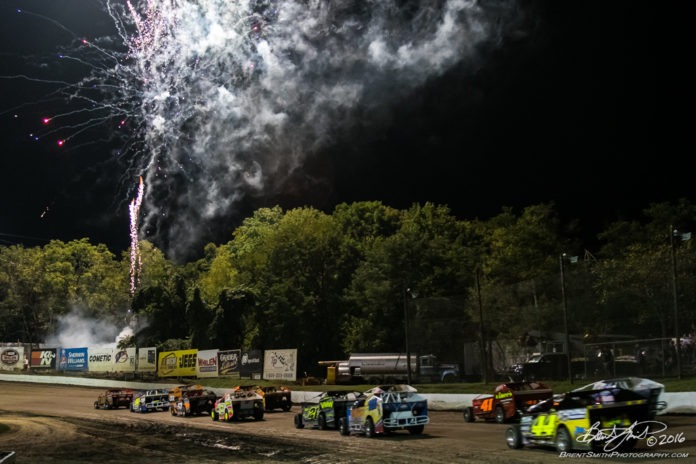 Whether you attend the Grandview Speedway as a weekly fan, sporadically or just for one of their special shows, you know when you show up who the three drivers are to beat in the headline 358-Modified division.

Craig Von Dohren, Jeff Strunk and Duane Howard have totally dominated the action at the one-third mile bullring since the 1990’s and continue to do so today. Just looking at the numbers these three drivers have put up at Grandview Speedway is mind boggling. This article is by no means being written to downplay the talents of the other drivers that have driven at Grandview throughout the years. As a matter of fact, one could easily argue that the talent at Grandview throughout the years has been second to none which makes the accomplishments of the three drivers even more impressive. It has also been since 1999 (Terry Meitzler) when a driver not name Von Dohren, Strunk or Howard has won the track championship.

Just look at the numbers for each driver.

Duane Howard – 80 total wins, 1st Mod win 1988, 4 wins in the Freedom 76er, 2 Forrest Rogers wins, 5 Modified championships. Howard’s win total would even be higher except for the fact the Oley, PA driver ran as a Bridgeport regular in the early 2000’s where he totaled almost 30 wins there during that period.

That’s a grand total of 262 wins for the three veteran stars since Von Dohren won his first feature in 1982. The win totals for the three drivers at Grandview would be hard pressed to match at any speedway by a trio of drivers in the Modified division. The only speedway that I could come up with that a trio of drivers dominated for such a long period of time was the Canandaigua Speedway when the brothers Johnson (Alan & Danny) along with Bob McCreadie put up some staggering numbers in the 70’s, 80’s & 90’s. There have been many tracks where a single driver has dominated for a number of years like Billy Pauch at Flemington, Brett Hearn at Orange County just to name a few but for a trio of drivers to dominate for an extended period of time at a single speedway are few and far between.

The scary thing about Von Dohren, Strunk & Howard is that they are not looking to slow down anytime soon. All three drivers have superb rides for the upcoming season and it looks to be another season the rest of the field will be chasing the “Big 3”. Von Dohren is again behind the wheel of his own #1C Bicknell chassis. Strunk is wheeling the Glenn Hyneman #126 TEO chassis and Duane Howard is behind the wheel of the Norm Hansell #357 Bicknell chassis on a full-time basis for this season.

I very rarely attended Grandview Speedway in the 1990’s but since I moved closer to the speedway around 2002 I have had many a chance to attend the track.  I also had the pleasure to be part of a pit crew for a couple of years on a Modified that ran Grandview on a weekly basis in the mid 2000’s so I had a firsthand view of the show these three drivers can put on.

All three of the drivers have their hardcore fans and for most fans if you are a fan of one of them you despise the other two, but love them or hate them, you have to admire the talents of the three.  Watching them come thru the pack week after week is truly something you have to experience because it is scintillating. For Von Dohren, Strunk and Howard the race is about which of them can get to the front first because whoever does is the one who usually wins the race. It is not very often that any one of them gets passed for the lead once they have gotten to the front.

What is it like to run against the trio of Von Dohren, Strunk and Howard? I had a chance to talk to Billy Pauch Jr who ran as a regular at Grandview a few years ago and makes as many starts as he can at Grandview when his schedule permits.

“When people ask me to run at Grandview I know what it takes to run there but you know going in with those three and the dominance they have there that you have to work extra hard to make sure you are 100 percent every week. I haven’t raced there weekly in six or seven years but one of these years we are going to give it a shot. I think the years of experience they all have there are unbelievable. You look at a few of us that go in there from time to time and we’ve won some races. I know I’ve won a couple and I know Rick (Laubach) has won a couple there coming from the back, but it’s definitely a challenge.”

Billy also talked about their driving styles and what it’s like to compete against the trio.

“I certainly admire what they have done at Grandview. I think they all have different styles for the most part. You look a Jeff, I don’t think I have ever had an issue with Jeff through all the years I’ve been racing with him. Racing with Duane and Craig, we’ve had our issues but we’ve always seemed to be able to work through them. They both run hard and that’s what you expect. That’s why those two have dominated the win column and why Jeff has dominated the championship column. It’s been really impressive what all three of them have been able to do through the years.

“They’ve had their challengers, (Doug) Manmiller has run good there but he just hasn’t been able to do what those guys have been able to do. I think it will be interesting in the years to come, just look at their ages. Craig has to be around 55 or 56, Duane is right there with him. Jeff is a little younger I think but he has to be close to if not 50. Look, I hate to say this but they’ve all been racing before I was even born. I hope to get back there in the near future. I love running Grandview, there is nothing like running ‘The Hill’ on Saturday night. There’s a lot of young talent there in (Jared) Umbenhauer and (Brett) Kressley and if (Mike) Gular can stay out of trouble like he did last year he should be able to give them a run. But if you really think about it, when is the last time someone other than each other has started behind them and won. It just doesn’t happen.”

I also reached out to long-time Grandview announcer Ernie Saxton to get his perspective on how it was for him to watch the three drivers make their mark on the speedway.

Ernie offered his thoughts on each driver and their style of driving and why they were so successful.

“They were successful because they were good at what they do. They have competed against each other from the start. They all raced together in go-karts in the area speedways and were familiar with each other before they even started at Grandview. To me they all had different styles. Jeff Strunk was the kind of guy you could race with and never have to worry about getting knocked around and he was the kind of guy that worked at picking them off. Jeff would start back in 14th or 15th spot and work his way through the field and probably never hit another car. Duane Howard is more the kind of guy and I hope he doesn’t take this as an insult is more like a bull in a china shop. Duane would work his way through and probably took advantage of mistakes the others would make and sometimes there was contact. You have to remember and sometimes I would take a beating for this over the years is that I always said racing at Grandview is a contact sport. Anybody that races at Grandview and has not made contact hasn’t been successful. It’s a small track, it’s a banked track and you’re bound to have contact along the way. I think Craig Von Dohren is more of a polished guy and has been a master at Grandview and has been the kind of guy who takes advantage of the opportunities. Craig is always out there to win, but he is a guy who always consistent but if he doesn’t win he is always close to the front and that’s going to earn him points and win titles. The same holds true for Jeff Strunk who is a ten time champion at Grandview and who has had seasons where he didn’t win a lot but always stayed at the front and was always in the top three or top five enough to earn him a championship.

“You know there hasn’t been another champion other than Howard, Strunk or Von Dohren since 1999 when Terry Meitzler won the championship. From my point of view being the PR (Public Relations) guy I would’ve liked to see somebody else win the championship but I understand these three guys that it is a competition between them and I think it’s going to continue this year.”

The competition is top notch at Grandview Speedway and there a few drivers that hope to have something to say about who is the man to beat. Doug Manmiller ended the year strong last season in the Jason Miller #44 with a win and is no stranger to victory lane. If Manmiller can maintain some consistency during the season he could be the one to watch as well when it comes to competing for the title. Mike Gular came as close as anyone to stealing the title away last season in the Stankiewicz Roofing #2 and looks to be just as good this season.

Youngsters Jared Umbenhaurer and Brett Kressley keep getting better and better each season and are close to competing for a title. New Yorker Brian Krummel will make Grandview his home this year at the speedway in the Zubi’s Racing #17 and should improve each and every week.

When you get down the nuts and bolts of it at Grandview Speedway the odds are that Craig Von Dohren, Jeff Strunk or Duane Howard will be standing in Victory Lane more often than not. They don’t win all the races but its good bet that between the three of them they will win close to half of them and it would be a safe bet that when the championship trophy is handed out at the end of the season it will be one of them as well. You may not like it but that’s the way it goes as Grandview Speedway and until someone steps up or they retire that’s the way it will probably be.

I would like to thank Ernie Saxton and Billy Pauch Jr for taking the time to talk to me regarding this article.

As always, I can be reached by email at dirtracefan25@hotmail.com or on Twitter @dirtracefan25 for any questions or comments.