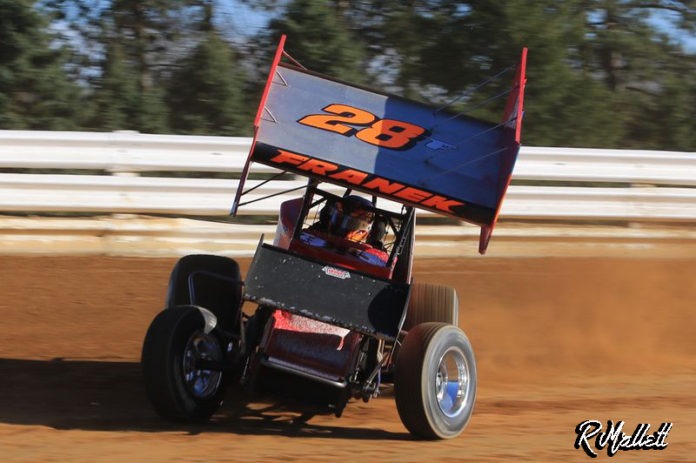 Davie Franek had done his fair share in the world of Northeast Sprint Car racing. The Sussex, N.J., talent has been a United Racing Club champion while also winning features at several different facilities during his career. In 2017 he looks ahead to a new challenge. Not only will he not be competing with one sanctioning body, but he’s adding another weapon to his arsenal, a 410 powerplant.  He talked about his plans on Saturday night at Selinsgrove Speedway after a second place run in the Spring Showdown.

Franek understands the challenges involved in making the jump to the next level of Sprint Car competition.  Several drivers have tried and only a handful have been able to find success. He knows that going in. As a guy that doesn’t run them all the time he’s going to be behind the curve.

“The problem with it is going to be that you got to run them all the time,” he said. “If you go to go a track you race at quite a bit you kind of stand a little bit of a chance if it’s a time trial show because you have some laps. On a normal regular basis it’s tough with that.”


Right now Franek has only a handful of events scheduled for the 410 with the focus remaining on the 360. He’ll race with it when he can. If things go the way he would like he’ll end up heading south in November to cap off the season at the World Finals.

“We want to explore a little bit and do some stuff with that,” mentioned Franek. “I think we got ten to 12 races on the schedule. We want to get to the World Finals at the end of the year as long as everything holds up and we don’t run out of money. It is only the first race of the season, but that’s the plan. We also want to hit some of the Jersey races with the 410, here and we have some other ones on the schedule.”

2017 is definitely going to different for Franek. He’s been successful throughout his entire career and more often than not he lives up to the nickname, ‘No Panic.’ He’ll no choice if he wants to find the same success with the 410 that he’s had in the 360’s.