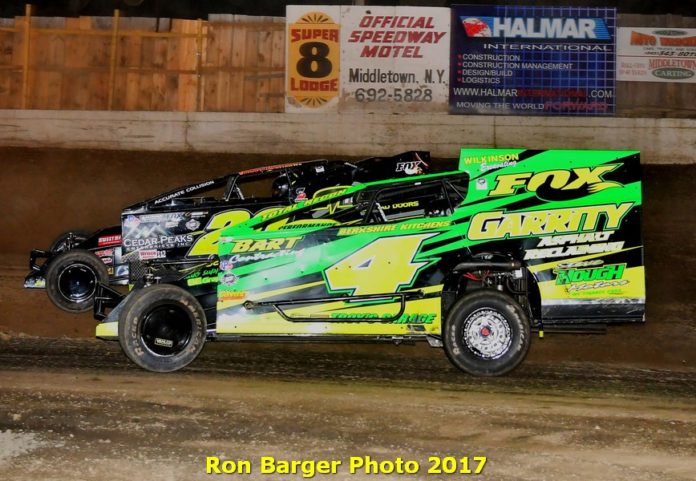 There was lots of talk leading into Sunday’s rescheduled Hard Clay Open at the Orange County Fair Speedway wondering how the track was going to be with detractors saying that that passing was going to be limited.  Andy Bachetti and Tommy Meier, among others, proved that theory to be dead wrong.

Bachetti started in the 20th spot before passin,g both Stewart Friesen and then Brett Hearn for the win while Meier marched his way from 26th to fifth to claim hard charger honors. Needless to say, there was plenty of room to race on Sunday afternoon.

After making a 19 car jaunt to the front, Bachetti still had a huge smile as his car and engine were going through the post-race tech inspection process. The Sheffield, Mass., driver and two-time and defending Short Track Super Series champion credited the team with how things went in the 50-lap, $5,000 to win race.

“The motor is fresh, the car is great,” mentioned Bachetti as he sported a Billy the Kid Performance Engines powered Teo. “We have a new team underneath me right now. I can’t say enough about Mike Garrity (Garrity Asphalt Reclaiming), Fox Shocks, I just couldn’t do it without these guys, Steve Hough.  This is an incredible group of people that I got around me, surrounding me. It’s just an awesome program we got here right now and I can’t say enough about them.”


It wasn’t all positive for Bachetti on Sunday as his day nearly got derailed in his qualifying heat. Bachetti was running in a redraw position when the tire went flat on his No. 4. As a result he was forced to the pits to make repairs. He returned and was able to finish sixth.  From there he went on to win his consolation race to earn the outside of the tenth row in the main.

“We got a flat in the heat when we were in the redraw,” said Bachetti. “I’ve said you got to have luck in this game. To get a flat and start 20th in this deal, you never know what can happen.”

Bachetti did something that many people could only hope to do, he passed both Stewart Friesen and Brett Hearn at Orange County. That is no small feat. He made his the passes look easy as he went by Friesen first then drove by Hearn to take the lead for good.

“I knew if I got Stew (Friesen) there that Brett (Hearn) was running wide and not getting off real good so I just had to tip toe,” cited Bachetti. “You know, beating him here is like winning the Daytona 500 because not too many pass him when he’s leading. It’s a good feeling. It’s a good start to the North Series.”

Tommy Meier salvaged a pretty good day after things didn’t start out all that well for the 2016 Orange County Fair Speedway Modified champion. Meier went for it all in the heat race after a poor pill draw and unfortunately that earned him a spot in a consolation event. Meier, like Bachetti, was able to race his way into 30 car starting field. He went off from the 26th position.

“We drew a lousy number that set us back,” commented Meier. “I made a mistake in the heat race. On the last lap I saw Jerry (Higbie) was going to get crowded down. I don’t know who was in front of him, but I thought if they tangle maybe I’ll go around them. Yeah, I went backwards.”

During the feature, Meier found a groove through turns one and two that allowed him to get to the front. Meier was able to drive around several drivers to put himself fifth at the checkered.

“I could run the outside of one,” he said. “If I could time it right to get across the race track I could get a nice run down the backstretch, but there is a big ditch between one and two that is throwing a lot of dirt on the track. So you could hit it once, then you’d miss it once, then you hit it once and miss it again. It was just hard to do every lap. Luckily we were able to have a good day.”