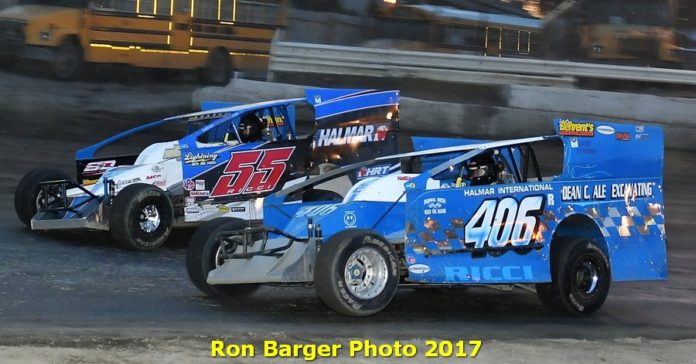 Being in the “business” you never really wish for a rain date to come to fruition, but when Brett Deyo and Mike Gurda decided to move the Hard Clay open at the Orange County Fair Speedway back a day. Well…it just had to be done.

Saturday duties had us at Selinsgrove, so unless there was a freak of nature, there was no way we were trekking to Middletown. Unless of course the rain date was used, you know, the holy day. Sunday.

Google maps says 239 Wisner Ave., that address was my Saturday night home since I was a little tyke (dad says REAL little) to 1984 before I ventured to Upstate NY where I am now. It’s home, plain and simple, home.

I was lucky, grew up in the days where Reutimann (two of them), Balough, Osmun, Bottcher, Malzahn, Strupp, Schneider and a host of others rule the roost. I saw Brett Hearn’s first ever race, win and well, everything else where he became oh so “popular”. Rich Eurich is celebrating his 50th year in racing and I think I remember #% of them. The place oozes history, it was Modified’s mecca.


I saw Deyo’s first Hard Clay Open and there was a feel, an aura all about the Fairgrounds. It was cool to see the old girl have a good day. Happy to say, the fourth annual deal has the same feel again, cool.

A little different this time though, I plucked myself in the very same seat under the covered grandstands where I spent some 15 years at. It was a little sentimental and I was reminiscing a bit. Why not? Although this time I was plenty old enough to sample what the 31st Lap really has to offer.

As Mr. Mallett and Mr. Bruce have covered the actual event nicely among this site, just wanted to bring you a quick view and some notes of the day.

Andy Bachetti will go down in these eyes be showing us one of the most determined drives you will ever see. Throw that “You can’t pass at Middletown” shit right out the window. And, what a drive! He passed, well, let’s see… Decker, Perrego, Friesen and Hearn to get the win. Yes, passed and last I check those dudes are pretty darn good.

Track staff, big thumbs up! That place was a mess on Wednesday and Thursday. If you were there and said there was going to be practice on Saturday and racing on Sunday you would have thought they were nuts.

A total of 54 Modfieds filled the pits an with the additions of the aforementioned Decker and Matt Sheppard added a nice flare to the normal Short Track Super Series field that is spiced up by the locals. The Deyo notion of $5,000 to win, $1,000 for tenth purses prove very popular.

When Danny Creeden got sideways on the lap 28 restart you kinda cringed that the Talladega “Big One” was to follow. It was bad, but could have been worse. Also, good to see David VanHorn okay after his ride.

Every car that has the word Halmar on the side made the feature event, they do have a good crop of drivers. Speaking of Halmar, watching Allison Ricci and her great qualifying effort was fun. She is definitely a Ricci.

Horton made it, Eurich made it and was hoping that Jeff Heotzler was going to do the same…A bit weird not seeing a name of McKee somewhere racing…Good to see Pete “Crackers” Reynolds back into racing at Middletown again…Do miss Little Jimmy’s Pizza however!… Do have to admit seeing these names in the Sportsman, Eggers, LaBagh, DuBois, Ricci III, Finch Jr and others, brings back the memories there as well.