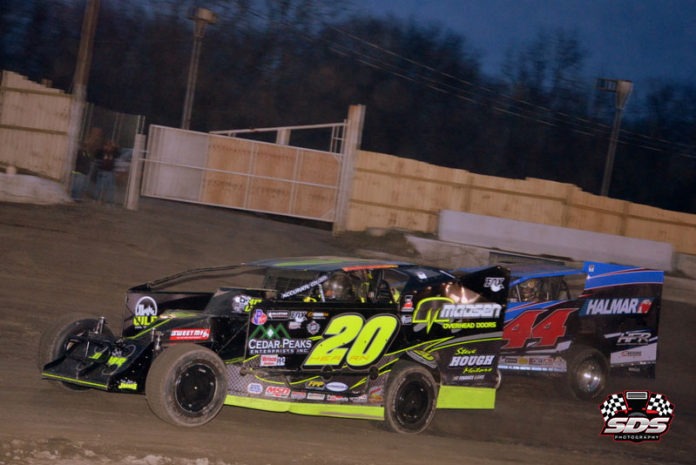 When Brett Hearn starts on the front row for any feature you know there is a good chance the driver out of Sussex, N.J., will end up in Victory Lane, but when that happens at Orange County Fair Speedway where Hearn just happens to be the track’s all-time feature winner it almost a sure thing.

Starting second in the Hard Clay Open, Hearn was the odds-on favorite to win the race and it certainly looked like that was going to happen. Hearn quickly jumped out to a big lead early in the event.  At that point it looked like it was over. Matt Sheppard, in his new part-time ride with the Sweeteners Plus team, got to second place around lap 20 and looked like he was going to challenge Hearn but after a caution flag shortly thereafter lost second back to Stewart Friesen on the restart he suffered a flat RR tire on lap 28 ending Sheppard’s chances of a victory.

After a huge pileup on the following restart which started when the hub broke on Danny Creeden’s car Hearn once again took off with the lead with Friesen in close pursuit. Friesen pulled in on Hearn and looked like he was going to mount a challenge only to have Hearn rebuff the challenge and keep control of race.

However, as the race progressed you knew that Friesen wasn’t done yet and was trying to bide his time to wait for the precise moment he could pounce on Hearn just like he did in last year’s Eastern States 200 when he went by Hearn on the last lap to claim the victory.


This time Friesen didn’t wait until the last lap as he tried to go to the outside of Hearn entering turn one with 13 laps to go and almost made the winning pass.  Hearn was once again up to the challenge and held him off. As the two superstars of dirt racing battled it out for the win, reigning STSS North champion Andy Bachetti surprised them both and rocketed by both of them to take the win. Friesen was finally able to get by Hearn but Bachetti was long gone by that time and had to settle for a second-place finish. Hearn hung on to finish third.

Friesen explained what he was thinking and how he thought he had made the right move.

“It was a decent run for our Halmar Racing team. I was trying to size up Brett there and got a run on him going into (turn) one.  I thought alright there so I moved up on him the one time and got up into the dust and slid out and lost some ground.  I figured at that time if somebody was close they were going to be flying by me now and no one went by so I said alright and I made the ground back up again.  I went up there again and this time Andy (Bachetti) stuck it in the hole and went by me”

Friesen went on talk about how the track played into the racing and what he should’ve done to get by Hearn instead of what he tried to do.

“The track was definitely challenging today. It was a typical springtime track here or anywhere for that matter. The track crew did a pretty good job with what they were up against due to all the rain we’ve had here in the Northeast the past couple of weeks. I thought I could get by him (Hearn) on the outside but he forced me up into the marbles there, but that’s what he’s supposed to do to protect his lead. I probably should’ve been working the bottom instead of top but I just didn’t think anyone could get a run down there in turns one and two with the hole that was there.  Somehow Andy made it work and snuck right through there. Like I said it was a good day for the team. We ran our TEO car today with our Billy The Kid Performance open small-block and we were fast.”

With a break in his NASCAR Camping World Truck Series schedule until Friday May 12th at Kansas Speedway Friesen is hoping to get back into the swing of things on the dirt circuit for the next few weeks.

“Yeah, we got a short break here in out truck schedule so we’re going to get back at it here on the dirt. It looks like we’ll hit Fonda Speedway next Saturday for their opener then to Malta (Albany-Saratoga) and then back here for their opener. Then to Bridgeport for their STSS race, so we’ll keep busy through the break.”

After leading most of the race Hearn was obviously disappointed with his third-place finish.

“Yeah, were definitely a little disappointed finishing third especially after leading most of the race. I think the right rear tire sealed over and that hurt us some. It made us really struggle getting off the corners late in the race.  I think that was the difference. I also think having the big-block in the car and having to weigh 2500 lbs hurt us late in the race as well.”

Just like Friesen said earlier, Hearn was very surprised that Bachetti was able to underneath both of them to win the race.

“I was concerned with Stew (Friesen) trying go around me and getting a run on me on the outside and then the next thing I knew BAM, Andy went underneath both of us and he was gone. Andy was really good on the bottom today for sure. Hey we got a top three finish and if you get enough of top five or top three finishes you’re going to get a win sooner or later.”

Hearn doesn’t run too many of these STSS shows and I asked him if he had any plans to race anymore of them later on this year.

“We don’t really have a plan for any more of these (STSS) races but we’ll see. Running these American Racer tires is little bit of a hardship for us. We don’t run them that often and that’s really not what our program is built around but I won’t rule it out so like I said we’ll see.”