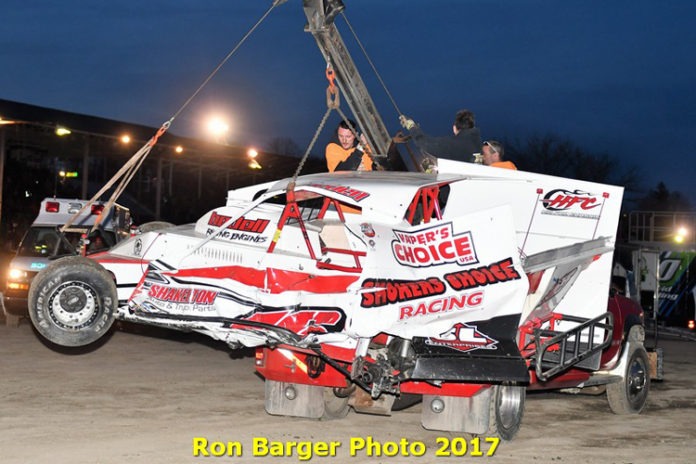 All signs pointed to it being a good day for Danny Creeden in Sunday’s Hard Clay Open at the Orange County Fair Speedway. He was moving forward and running in the top three just after the midway point.  He was on the charge.  That was the case until a lap 29 restart when it all went quickly south for the Wurtzboro, N.Y., driver.

As everyone got back on the gas to resume racing action, Creeden did the same. That’s where the problem began. Creeden’s left rear tire came off of his No. 16x. That caused Creeden to spin with the entire field bearing down on him.

“I broke a hub,” stated Creeden afterwards. “The hub is sitting right there in the wheel. I don’t know exactly what happened. I don’t know if a bearing went bad or what, but that will teach you to buy new shit I guess.”

Creeden’s car spun before the left rear dug into the speedway. His car jumped into the air where he was hit hard by Jerry Higbie.  This appeared to stop his car from completely flipping. Mike Mahaney, Erick Rudolph and Tyler Dippel also piled in. Creeden’s night what was done as were many of the others involved. The entire left side of his car suffered damage.


“It looks like it needs a roof, a left side door and quarter,” commented Creeden. “I already text Bob Henry to get some exhaust pipes. I’ll put a header on it and honestly, I’ll probably have it next week at Accord (Speedway) shaking it down again.”

The crash was a tough pill to swallow for Creeden. He had a car that was capable of finishing on the podium. One broken part and that was all gone in an instant.

“This is a heartbreaker,” mentioned Creeden. “I can never get out of this place good. I’m sitting there riding third and I was thinking if we just get a top ten we’ll be alright. This puts us behind the Eight Ball. I finally had a great race car and had a good run going.  I don’t know, it’s a heartbreaker. I got rolling on the outside. We had a very well-balanced car. It’s a brand new race car. Maybe she christened now and ready to go.”

Even though it didn’t end the way he planned, Creeden was still grateful for all the hard work the crew did to get the car to the point it was at. It was where it needed to be to put him in contention.

“We had a really good car,” he said. “This team busted their ass. I got my favorite race car called Clyde. I kept screaming this car ain’t Clyde and they kept working on it. We had Pete (Brower) from PAC Springs and Bruce (Harwood) from Fox Shocks here. We got the thing on a rail. It was really good.”

The series now shifts to Thunder Mountain Speedway on May 28th.  Creeden is the defending track champion at the facility.   He’ll be hoping for some better luck and a better finish.