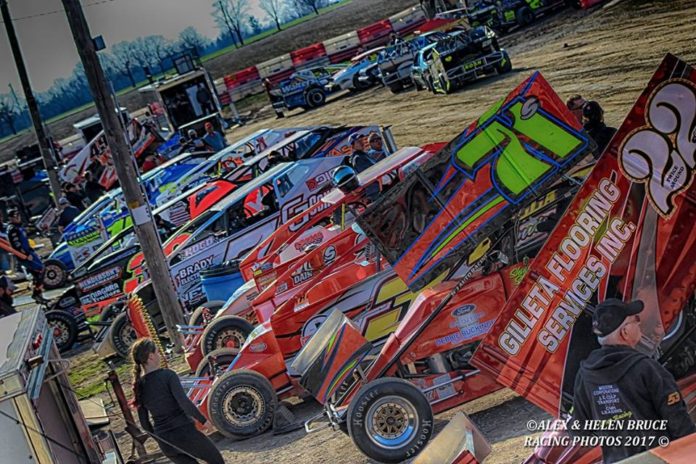 Opening Day! The aroma of the track cusisine cooking in the concession stand, the new smell of the souvenir t-shirts, to the sweet aroma of gasoline and methanol to the sound of the engines firing up are just some of my favorite sights and sounds of getting to the track for the first time. Getting to see all the great paint jobs at the beginning of the season and seeing who moved up, changed numbers, new sponsors is just part of the fun that is Opening Day!

This coming Saturday (April 22) at the Merrittville Speedway is the annual Spring Sizzler, which officially kicks off the 2017 racing season in the Niagara Region. The Spring Sizzler, presented by Peters Excavating is the first race for new track owners Don and Lorraine Spiece. Racing at the fast paced Merrittville D-shaped oval will be the Patriot Sprint Tour plus the 358 Modifieds, Sportsman and the rescheduled TUSA Mod Lite Canadian Nationals from 2016.

When the Patriot Sprint Tour comes to town, everyone will be chasing down defending race winner Jason Barney. The driver from Brewerton, N.Y., took the lead away from polesitter Matt Tanner on lap four and led the remaining laps to pick up the win. 2016 Patriot Sprint Tour Champion Jared Zimbardi finished in second followed by 2015 Southern Ontario Sprint Champion Mitch Brown with “The Fireball” Steve Poirier and third generation driver Cory Turner completing the top five.

The 2017 Patriot Sprint Tour event at Merrittville will have the locals trying to defend home turf from the invaders from the States including 2016 Southern Ontario Sprints titlist Dylan Westbrook, defending Ohsweken Speedway 360 Sprint Car champion Mitch Brown, “The Ohsweken Flyer” Glenn Styres, veteran Jim Huppenen and the Turner family (Jamie, Ryan and Cory). Westbrook, Brown, Huppenen, Styres and the Turner’s all took part of the test and tune session held on April 15th.

In 2016, Mike Bowman took his number 71 to victory lane in the Spring Sizzler over Chad Brachmann and eventual track champion Pete Bicknell. Mark D’llario and Ryan Susice completed the top five. For 2017, “The Ransomville Renegade” Ryan Susice will be the driver of the Transport Sales and Service, Bicknell Racing Products #3RS driving for Randy Slack. Susice told DTD in December that “I think working with Bobby (Slack) and everyone at BRP (Bicknell Racing Products) will set me up to win some races next year. I’ll be very disappointed if we don’t. Everything is there to put me in the winner’s circle.” Susice will not be doing double duty this weekend at Merrittville as he is focusing on the Slack Racing Modified. “I want to be fully focused on the Slack team this week” Susice said. “The car was pretty good last weekend during test and tune. I think we have a good piece to contend for the win” Susice added.

In the Sportsman event, Brad Rouse took his potent 18R to victory lane over Cody McPherson, Ransomville divisional champion Matt Farnham, Rob Knapp and veteran Chad Chevalier. Rouse started on the pole for the 25 lap feature go and after several restarts early in the event, Rouse would eventually pull away to score the win. McPherson, who finished second to Rouse in the Spring Sizzler, drove on to earn to the 2016 Merrittville Sportsman championship.

The Mod Lites ran their 2015 Canadian Nationals as part of the 2016 Spring Sizzler and it was “the Beamsville Bullett” Paul Klager taking home the win. 2015 track champion Jeffrey May finished in second and was followed closely to the line by Derek Wagner, Steven Beckett and 2016 track champion Josh Sliter.

The 2017 Spring Sizzler will start at 7:00pm with pit gates opening at 5:00pm and the grandstands swinging open for the first time at 5:30pm.

Next weekend, two other tracks will kick off their campaigns as it is Test, Tune & Time at Ransomville on Friday April 28th and the Humberstone Speedway hosts its second annual Dawn of Destruction event on Sunday April 30th. Saturday April 29th will be the first point’s paying event at Merrittville as it is the 66th Season Opener for the weekly divisions, 358 Modifieds, Sportsman, Hossier Stocks (Street Stocks), Mod Lites and 4 Cylinders. The Novice Sportsman will also be on the card on April 29th.