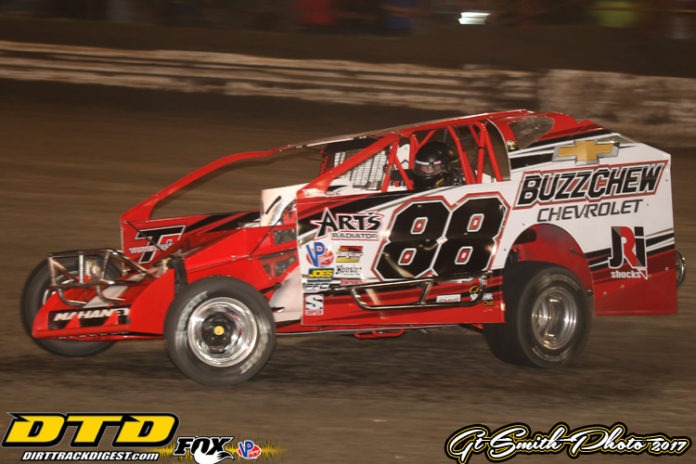 KING FERRY, NY – Mike Mahaney is ready for an all-out assault on the racing world for the 2017 season. Mahaney has plans that will find him in multiple rides, different race cars and all over the map with events planned in New York, Ohio, Pennsylvania and Canada. His schedule currently includes over 100 events with Modified and Sprint Car events planned.

Mahaney returns to pilot the Jim Shear and Cheryl Brady owned No. 77x for the season with a twist. The team is leaving the Southern Tier to focus their attention on Friday night racing in Central New York at the Brewerton Speedway. The teams has had a lot of success winning titles at both I-88 Speedway and Thunder Mountain Speedway. They’ll now attempt to bring that mojo to Brewerton on Friday nights with support from Olum’s.

“This is going to be a big change for their team,” commented Mahaney. “We’ve been running small-blocks since I started racing for them in 2001. This year we’ll have a big-block and switch to Hoosier tires. We’ve had a lot success in the past winning some races and track titles in the Southern Tier. Now we are going to see if we can do that against the DIRTcar guys.”


Mahaney has prior experience at the “Demon” when he raced his family owned team there before heading to the Southern Tier. He hopes to use the knowledge gained while away to improve his results. He has yet to win a Modified event at the speedway, but last year he finally conquered the facility in a Sprint Car owned by Doug Emery.

“When I raced there in the past it was with our family owned 33 cars,” he said. “Back then we were running a different chassis and different engines. There were a few different guys racing there than there are now. Since then I’ve gotten a lot more experience. It’s going to be exciting to go back and get a little bit of redemption because when we raced there weekly we came close to winning a number of times. There were a lot of races, close races, where we ended up second. If we can pull of a win that would be exciting for me. That would be a long time coming.”

Mahaney has a hectic schedule set for Saturday night’s that involves both the Emery owned Sprint Car as well as trips to Pennsylvania’s Grandview Speedway when time allows to compete for Breitenstein Motorsports.

“We are going to be doing a mix of things on Saturday nights,” mentioned Mahaney. “We’re running Doug’s (Emery) Sprint Car at a number of ESS (Empire Super Sprint) races, World of Outlaws and some All-Star Sprint (All-Star Circuit of Champions) races. We got quite a schedule for that. When I’m not running the Sprint Car I’m going to be running the Breitenstein Motorsports car at Grandview Speedway. Billy Pauch Jr. normally races it, but he’s at New Egypt (Speedway) on Saturdays so he can’t most of the time. We are splitting the schedule up.”

Sunday night’s Mahaney returns to Utica-Rome Speedway where he scored a top ten point finish in 2016. Mahaney has six career wins at the track with his last coming in 2015. He looks to get off to a strong start at the Bill and Kim Shea owned facility as he returns to the seat of a Skip Seymour owned Troyer car.

“On Sundays we are racing at Utica-Rome with the Skip’s Racing car which is also with Olum’s on it,” stated Mahaney. “Skip has helped me out the last few years at Utica. He’s owned cars that I raced there and helped us build our own for there. The new car we have this year I’m really excited about. I’m pumped up to see what I can do there.”

Mahaney also has ambitious plans with both the Super DIRTcar Series as well as Brett Deyo’s Short Track Super Series North Region. He’ll run the Buzz Chew No. 88, the Charlie Davis owned No. 21 as well as his family owned Troyers in select events throughout the Northeast.

“We’ll race Middletown, the Hard Clay Open, with Buzz Chew,” cited Mahaney. “They aren’t doing just the series, but they are also not doing the whole series. We are going to do all the races we did last year on the tour and we are adding the Hard Clay Open and Eastern States. We may fill in some other special events as we go.”

He continued, “We are going to Canada with my car and we’ll fill in the rest of the tour with the family owned car. That will have Olum’s on the car as well. They’ll be on the No. 21 as well which we’ll be running all of the Short Track Super Series with. There is a conflicting date with Thunder Mountain and Utica, but we’ll see where we are at in the points and take it from there.”

Mahaney is going to be busy this summer as he travels the country-side to get to his next events.

For a detailed schedule of his plans for the 2017 season fans can visit www.mikemahaneyracing.com. Fans can find where Mahaney will be racing and when on the schedule page. They can also find information about results as well as team merchandise.