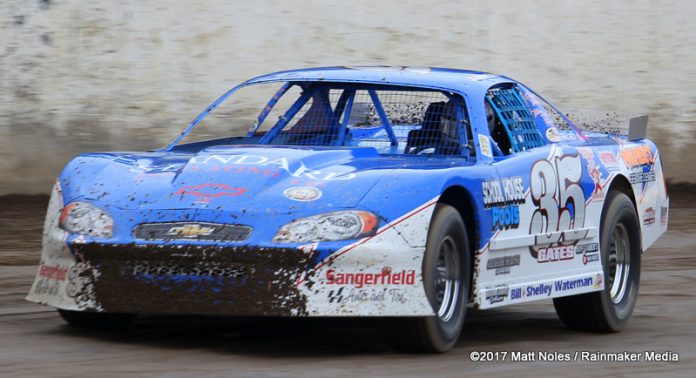 After one of the most dominating seasons behind the wheel of a pro-stock in 2016, defending Fonda Speedway track champion Kenny Gates continued right where he left off a year ago with a convincing victory in Saturday night’s season-opener at the Montgomery County fairgrounds.

Gates, who is beyond a doubt the best pro-stock driver in the history of the historic speedway, won his heat race and the 20-lap feature event to sweep the evening and serve notice that he is still the man to beat at the ‘Track of Champions.’

“To pick up right where we left off is huge,” stated Gates on Saturday night. “It’s a great feeling to have.” As great as that feeling is, and undoubtedly deserving in the same light, there were still obstacles that had to be overcome on his way to victory lane in the season-opening pro-stock feature; one being track position.

“We were following Kenny [Martin] during our heat race,” He continued. “And I knew that my car was just a little bit better than his was and if I didn’t pass him, I would have to start behind him in the feature and it would be harder for him to pass me than the other way around so I went for it, made the move and won the heat race.”

By virtue of his heat race victory, Gates found himself among prime real estate for the feature event. Again, though, the feature wasn’t as easy as it seemed to be for the multi-time track champion. By all indications, the driver of the familiar No. 35 pro-stock will have stiff competition this season in the form of rookie pro-stock campaigner Josh Coonradt.

“I was surprised to see the No. 00 alongside me a few times,” Gates stated. “It’s difficult to tell how hard to run when you’re leading. All of a sudden I felt some pressure and I said ‘darn, I gotta go.’ He was able to get through traffic a little bit better than I could I think; he was definitely coming.”

Though it may have been a surprise to see Coonradt throughout the course of the feature event, Gates wasn’t that surprised when the race was complete. “You know he [Coonradt] can drive,” He explained. “We saw that when he was racing street stocks. Overall, I’m not that surprised that he was staying with me. It seems like every year you always wonder who’s going to be the one to surprise you and challenge you weekly; I guess I already know who it is.”

Where some competitors may become concerned with stiff competition, Gates is the exact opposite. In fact, the West Winfield, New York native is actually looking forward to it.

“I’m looking forward to some battles with Josh in the future,” said Gates. “He seems to run hard but clean and I’ll run against someone like that every night; that’s fun racing. You hope to do that every night. He knows that he can run me hard and I’m not going to dump him and it seems like I can do the same. We’re going to have some good races; it gives me something to look forward to.”

Though the points do matter at the end of the season, being the veteran that Kenny Gates is, his mindset is that it’s too early to even think about point totals. “Points do matter but they don’t this early in the year,” He remarked. “If you get some wins and start out with some momentum, everything seems to fall into place and you don’t even worry about that. People think I’m a points racer and I’m really not. I just try to finish; I try to make sure I’m there at the end and hopefully I’m in a position to battle for the win. It’s worked pretty well for me all these years so I’ll keep doing that.” As far as ‘big picture’ racing is concerned, Gates is exactly where he wants to be this early in the season. “I’m definitely where I want to be right now,” He said. “Believe it or not, that extra week off because of the rain helped me to be really race ready. We were able to finish up some things on the car and be really prepared and concentrate on the first week and it showed tonight.”

With one victory already under his belt this season and coming off of a dominating season the year before, age doesn’t seem to be having any negative effect on the seasoned-veteran; in short, he’s still the man to beat. “I still think I’m the guy to beat here,” Gates concluded. “I’ve been at this a while and we had a fantastic year last year and we started out this year hot so yeah, they’re going to have to chase me the rest of the year.”