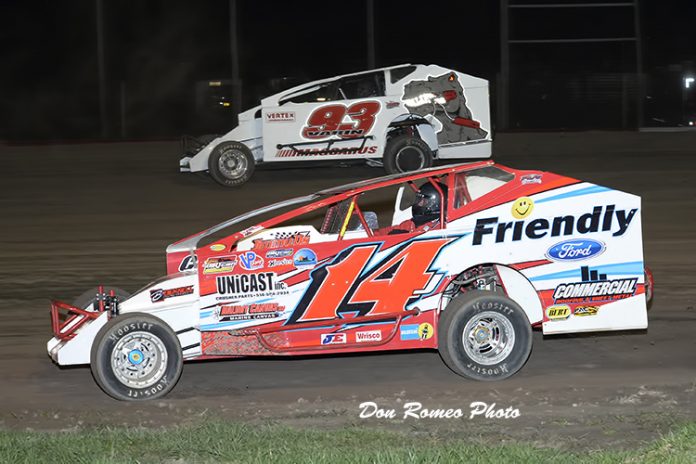 I made my first trek out to a racetrack this year on Sunday for the 56th season opener at Utica-Rome Speedway in Vernon, N.Y. The weather was absolutely beautiful, but the late week rains had soaked the grounds pretty well causing some uncertainty as to how much water to soak the track with. I also believe that the sunshine brought the temperature up a bit higher than anticipated which caused some premature drying on the racing surface.

The track crew worked diligently to provide a safe environment for racing. It may have taken longer than some teams expected, but my hat is off to the crew, and the patient race fans who were basking in the early spring sunshine enjoying the stellar field. 32 DIRTcar Modifieds- won by Larry Wight, 50 DIRTcar Sportsman- won by Dave Marccucilli, 17 DIRTcar ProStocks- won by Robbie Speed, and 29 360 Sprint Cars filled the pits at my last unofficial count. Danny Varin won the first 20 lap ESS A-Main, while Lucas Wolf was the top runner in the second ESS A-Main. The official press release can be found in another column here at Dirt Track Digest for a more detailed description of track-side accounts.

Seeing the manipulation of the racing surface reminded me of so many things biblical it blows my mind. Seeing how so many people reacted differently to what was transpiring didn’t surprise me in the least. Human nature is much like clay. It’s molded by how a person reacts to the environmental changes that take place in their life.

Our body is made up of the elements of Earth, but we are much more than our body. Every human was fashioned by the hands of God into His image. His breath, which is His Spirit, animates every human with life. Our soul, known to be the seat of our intellect, reason, and emotion, was always intended to be governed by our spirit as we submit our will to God for guidance.


Dr. Caroline Leaf, a noted authority in neuroscience, has discovered that our brain functions can be changed by our thought life and speech patterns. This proves that our environment has no power over us unless we give it that power. That’s why I wasn’t moved in the least as I witnessed several varied reactions to the weather related track conditions in the pits and by mingling with fans.

With simple observation one can perceive the level of development (read: maturity) of a person by how much change affects them. Some allow emotions to govern their every action, some make time to evaluate options, while some flow with the changes undisturbed completely in control of their responses. Which do you think would be the more mature of these examples?

One example could be the many varied sound systems I’ve used to deliver public messages and invocations. Many years ago when I was a zealous young lad eager to preach, if something in the audio system failed, so did my character. I got upset and felt like I had lost control of the situation. I’ve had many things fail over the years, and many abrupt changes beyond my control to formats that changed when and how long I had to speak. Over the years God has changed me so that changes around me don’t affect me as much. I just roll along and do what I can with what I’ve been given, making the most of the time.

Yesterday was one of those occasions as adjustments to the brand new sound system were being handled. As I begin exhorting the fans they couldn’t hear me. I stepped a little closer while the sound engineer (announcer Mike Mallett) made some adjustments to the settings. I repeated myself, but still couldn’t be heard by the crowd. After a third attempt my voice came over the loud speakers with clarity and plenty of volume after a few more adjustments in the tower. I could have, and years ago probably would have, gotten flustered with the circumstances, but I just rolled with it and kept a flow going right into my prayer to save time so the program could move forward.

My point is this. Somewhere in the last decade or two grace has been trashed for negativity. Complaining doesn’t solve anything, but it does reveal where your heart lies on any issue. Two of my favorite Apostles addressed complaining and relational skills. While exhorting the Church to love one another Peter said

“Be hospitable to one another without grumbling. I Peter 4:9 NKJV”.

Paul boldly took it a step further when he was addressing the new nature of believers when he said “Do all things without complaining and disputing, that you may become blameless and harmless, children of God without fault in the midst of a crooked and perverse generation, among whom you shine as lights in the world, Philippians 2:14‭-‬15 NKJV”.

Both of these statements were made to the churches in the first century AD, but both Apostle’s messages are based on relationships and how to conduct ourselves toward other people, making them highly relevant today. In fact, just before he said “be hospitable to one another without grumbling” Peter prefaced this by saying “And above all things have fervent love for one another, for “love will cover a multitude of sins.”
I Peter 4:8 NKJV”.

People mess up, and things will happen beyond our control. It’s immature to think that flailing emotions or grumbling complaints will cause an effective change to the circumstances. Learn to go with the flow, you’ll discover a new found patience that will cause you to persevere over your emotions and “knee jerk” reactions. Life becomes more enjoyable when we return to a place of grace toward other people. You have to be willing to give what you expect to receive in return.

It may have been a late night for a Sunday show but the racing was worth the wait as is always the case at the Action Track of the East. Let’s start this season by being positive about the sport we say we love, and maybe we’ll entice a passion in a new fan base that will extend the life of our sport. King Solomon in all his wisdom said “Death and life are in the power of the tongue, and those who love its use will eat its fruit. Proverbs 18:21 NET”. Make sure your words are healthy and sweet and your world will change for the better.

I’m looking forward for the privilege of returning to Fulton and Brewerton Speedways this season as their Chaplain. I just received confirmation so I’ll see you all at the Fulton Speedway on Friday for day one of the Highbanks Holdup weekend. If anything comes up that we can assist you with just shoot me an email at: flchaplain@windstream.net
Expect God’s best everyday. That’s how my God rolls.