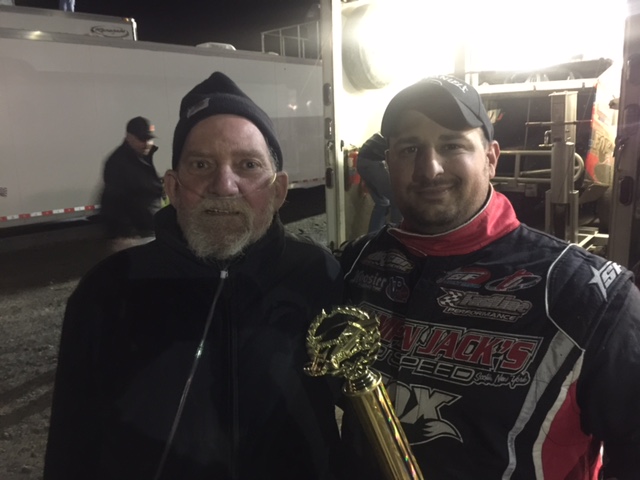 The 2017 racing season got off to a rough start. So far this season we have been rained out of four out of six events; two in Florida, Fonda last week, and Albany Saratoga on Friday.

On Saturday we finally got the season going at the famed “Track of Champions.” After following racing for over 60 years we have learned that you have no idea what the outcome will be on any given night. For the Modifieds at Fonda on Saturday it was a strong field of 24 cars. A few different faces were in the mix, Tim Fuller, Billy Decker and Stewart Friesen who is no longer a Fonda regular but is always a threat to win the big shows. The entire evening was a heads up start for Modified, Sportsman, and Pro Stocks.

After the Modified heats the field was set for the feature with Mike Maresca from Potsdam, N.Y., on the pole. As Maresca came onto the speedway his car suffered electrical problems and he was forced to the pits, giving up the pole and a shot a the win. This shuffled the line up putting Billy Decker on the pole alongside Bobby Varin. When the green flag fell Stewart Friesen jumped into the lead from his third place starting spot and lapped much of the field by lap 30. It looked as though the four-time track champion at Fonda was on his way to another win at the track. However, as we all know, it’s not over till it’s over. One of the strongest runs was that of second generation driver, Justin Boehler. For a time Justin was second to Friesen before dropping back to fifth at one point during the event and then making his way back to the runner up spot. With 45 laps in the books, Friesen blew a right rear tire. On the restart Boehler took the lead and drove on to his first Modified career win at Fonda, becoming the 127th different driver to win a Modified feature at the track.

On checkerboard square Justin said no words could describe what he felt. He said the feeling was unbelievable. When thanking who got him to victory lane, he first mentioned his wife, Amanda, his parents, Marie and Craig, sponsors and his in-laws, Mr. & Mrs. Ken Jones. He also thanked Ronnie Johnson and his crew for all their help. Over the years we have spent much time with the Boehlers and have come to respect how they conduct themselves whether winning or not. This was one of those nights that we got to share with them and it was richly deserved. Sometimes we think outsiders of our sport miss one very important thing. So many of the competitors at the track are very close once the checkered flag falls. On Facebook this week we saw that Pro Stock racer, Randy Cosselman had put a decal on the hood of his No. 5c racer in memory of longtime friend and fellow racer, Dave Joslin who was called home to heaven recently. We stopped to talk with Randy about this and he said he owed much to Dave Joslin, as it was Dave who got him out of the Street Stock division and into Pro Stocks. It was actually Dave that gave Randy his first Pro Stock. Randy has been racing for 14 years and although he has not found victory lane yet in a Pro Stock he is always a strong part of the show. He has one win at Fonda in Street Stocks. Randy races what he can afford and enjoys the class and the competitors. We sometimes overlook those like Randy who are big contributors to the excitement of the event. It wouldn’t be much of a race without them. We also stopped by Jason Casey’s pit and found that he and his dad, Jay will not be regular’s at Fonda this season. The Casey’s plan to follow the King of Dirt series and the DIRTcar Pro Stock series in the States. Jason said it is a long trip from Connecticut each week and they have decided to look at all the travel and eliminate some of it. We wish the Caseys the very best this season.

We also spoke with Corey Wilder who was in the pits in street clothes. Cory said he has no ride at this time. He drove last season for Bo Karl and it was a good ride but for now he has decided to step back and concentrate on the other things in his life like the house he and his girlfriend just bought. One of the CRSA Sprint racers, Sidney Prince comes from Killingsworth, Conn., and most of the events require a significant distance for the team to travel. Last season was her first time following the CRSA group and she finished seventh in points with three top ten finishes, competing in 21 events. Sidney was also honored with the Rookie of the Year award at the CRSA banquet and Best Appearing Car. The New York State Stock Car Association (NYSSCA) also awarded Sidney their Rookie of the Year plaque at their banquet in January.
We also ran into Dwayne and Carole Heroth who were visiting Fonda for the Ice Jam event. Dwayne and Carole along with Dickie Myers make up the ownership part of the asphalt race team with their son, Kreig Heroth as the driver. Along with their racing at Oswego in the Limited Super Modified, owned by Dwayne and Dickie, this year they will find their team racing in a different division at a different track on Friday nights. They will be traveling to Spencer Speedway to race a Modified, owned by Dwayne, with Kreig also in the driver’s seat. The team started the season in winning form at the Motorsports Expo in Syracuse where they won the Best of Show award. The last time we spoke with the Heroth’s and Dickie was at the Northeast Motorsports show at Rotterdam where we shot this photo.
Until next week please send all news and/or comments to biittig@yahoo.com