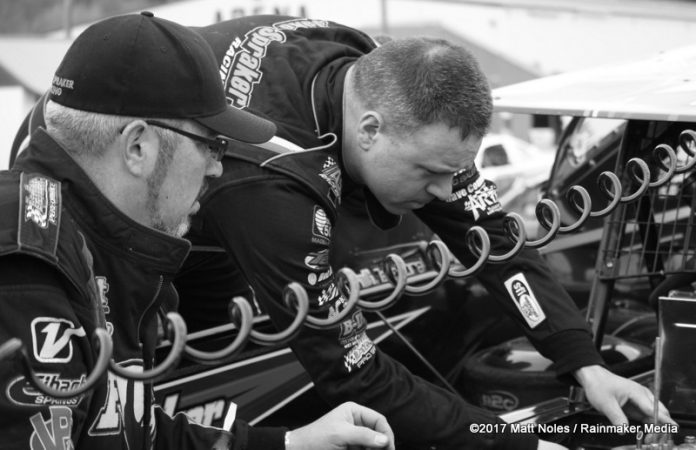 FONDA, NY – When you think of dominant drivers in the sportsman division, one name always seems to rise to the top of every conversation; Rocky Warner.

To say that the 2017 season has been off to a slow start is a bit of an understatement for the Gloversville, New York native. Without a notch in the win column heading into Saturday’s season-opener at the Fonda Speedway, it seemed as if the cosmos were out of balance.

When the green flag dropped on the sportsman portion of the Saturday night program at the Fonda Speedway, all became right with the world as a familiar name went straight to the front when Rocky Warner took his Jake Spraker owned No. 1J to the lead and never looked back earning yet another victory at the ‘Track of Champions.’ “Getting a good draw tonight was huge,” Warner said after his victory Saturday night. “It was a heads up start tonight and being able to win the heat race and then start second in the feature was a big deal. Chad [Edwards] got a good start on us but we were able to get around him and win the drag race.”


Though Warner has a knack for making winning look easier than it actually is, traffic made his trip to victory lane a little bit more difficult than normal in the 20-lap main event. “Lapped traffic wasn’t too cooperative tonight,” He continued. “There were a few tight spots here and there but we were able to make it work.” The season hasn’t been all too kind to the 2016 Fonda Speedway track champion; with difficulties and some controversy on the road thus far into the year, getting a victory certainly took a little bit of pressure off the shoulders of the veteran driver.

“This win is huge,” stated Warner. “Winning the first race of the season here is definitely a big thing; it gives you confidence to go out and race other places and do your thing. The first win is always the biggest one whether it’s the first win of your career or the first win of your season; it really takes a lot of the stress out of everything. It’s a big confidence boost for not just me but for Jake [Spraker], the crew and everybody really.”

Though it’s the first race of the year, it’s never too early to start counting points and ensuring that you’re in a position to challenge for the title at the end of the season. Warner, despite all of his success, shares in the same mindset.

“I’ve done it both ways if you want the truth,” explained Warner. “I’ve done it where I cared about points and where I haven’t and I don’t care who you are, you’re looking at the points from week one. The competition is so tough weekly that you have to pay attention to where they’re at and where you’re at as far as points are concerned. You may not be racing for points this early in the year but you’re definitely paying attention to them.”

With 2017 being the third year racing out of the Jake Spraker stable, every win is meaningful for the ‘Flying Squirrel.’ “Jake is a prestigious guy no matter who you talk to,” concluded Warner. “When you talk about good car owners, his name is always mentioned because everyone knows who he is. I’m just very, very honored to be able to drive for him. To have someone of his caliber pick me to drive his car is flattering.”