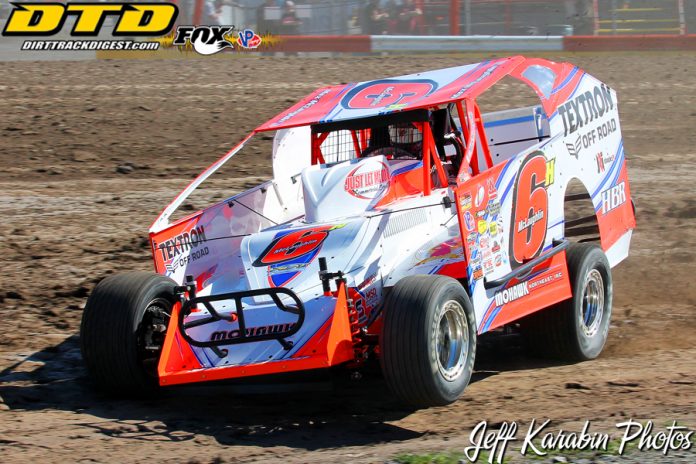 In August of 2016, Jimmy Phelps climbed inside a brand new big-block Modified. While a team like HBR rolling out a completely fresh car is nothing out of the ordinary, it was what Phelps climbed into that made headlines. For the first time in decades, maybe ever, Phelps hopped aboard a Teo Pro Car chassis.

Fast forward to 2017. After a number of huge wins and a track championship for Phelps with the new chassis, the HBR team prepared for a complete switch to Teo in 2017. Max McLaughlin was slated to drive the second full time entry for the team, and now faced a new challenge. In his sophomore season, McLaughlin would be changing chassis brands after campaigning a Troyer for the entirety of his rookie year.

On February 8th, McLaughlin and HBR announced that Matt Hearn had been appointed crew chief of the Textron Off Road, Mohawk Northeast #6H. After an extremely successful pair of nights in Volusia, McLaughlin is extremely excited for the upcoming year.

“The two chassis drive completely different,” stated McLaughlin. “The Teo turns a lot better, but it’s all really a comfort thing. Each driver is better in a certain car, and different driving styles suit different cars better. I can’t really say one car is better than the other, but I seem to like the Teo.”


Regarding car setup, McLaughlin noted the jump from Troyer to Teo was no small step.

“Completely different, night and day,” said the Mooresville, N.C., hotshoe. “You wouldn’t really think so because the cars are so similar, but it’s a lot different. Everyone has their little speed secrets, all the chassis builders have their secrets, it’s just a different world.”

Back in Volusia, McLaughlin noted how huge of an addition Matt Hearn was to the team, as Hearn was able to focus solely on the #6H on race nights.

“He’s a wizard,” McLaughlin commented of Hearn. “He’s probably one of the most talented people in this sport. Just looking at what he’s done, he’s won the Syracuse 200 on four occasions, and everyone he works with just goes fast. But, it’s not just one person, I have to thank this whole team. A ton of effort and hard work all the way around has been put in, and it really shows.”

Last season, McLaughlin just narrowly missed Victory Lane. After a number of top-five finishes at Brewerton, and finishing second at Fulton by a matter of feet, “Mad Max” is set on kill for the upcoming season.

Max McLaughlin and the rest of the HBR team can be seen every Friday night at the Brewerton Speedway, along with a full time effort on the Super DIRTcar Series tour, and select events at the Fulton and Utica-Rome Speedways. To keep up with Max’s efforts throughout the year, he can be followed on a number of social media platforms, such as Facebook, Twitter, Instagram, or follow along on http://www.hbrmotorsports.com/.