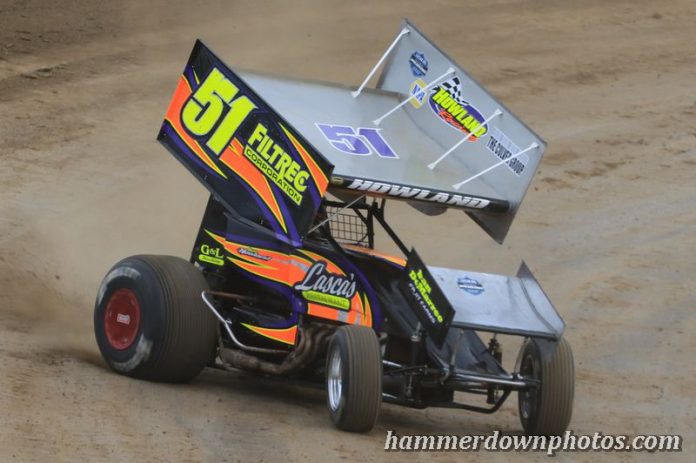 The four-time Patriot Sprint Tour (PST) champion “Flyin” Bryan Howland had his struggles in the 2016 season, but is looking forward to having no pressure on him in 2017. At the conclusion of the 2017 racing season, Howland will have run his last event behind the wheel of a 360 sprint car.

Retirement has been on Howland’s mind for the past few years. His two sons are at the ages that require a lot of attention. Howland is a family guy and wants to spend more time with his wife Tricia and sons Bryson and Cole. Fulfilling his duties at father John’s automotive equipment business, Filtrec Corporation, and working at the race shop right after is taking up the majority of his time. Sometimes, life gets in the way of hobbies, and sprint car racing is no exception.

Last season, Howland managed to grab a few top-fives and top-tens at the various events he went to, as well as one win at the Ohsweken Speedway. But he was not at all pleased with how his season turned out. The 2015 Canadian Sprint Car Nationals winner did not have the 2016 edition go the way he had planned either. He said his time-trial and heat race efforts were significantly sub-par, but he was able to qualify through the last-chance events and score a 10th place finish in the end.

Car setup issues seemed to be the main culprit for the #51. Howland says the frustration began getting to him and his crew, making it harder to score good finishes.


“It’s frustrating come September when you’ve fought the same problems with the race car. For us, it was drive coming off the corner,” Howland said. “When you fight that week-in and week-out for the whole year, it really nags on you. It’s tough on everybody.” Howland knows how tough it can be to beat his competitors even with a strong setup, and struggling through a whole year without a good car makes it even worse.

“If you don’t have the car right, with this group of [competitors] here, you’re not going to win,” Howland said. “Nobody’s going to take an ill-handling car and beat Chuck Hebing, Steve Porier, Jason Barney and so many more.”

Despite his rainy 2016 season, the Auburn, N.Y., driver is looking forward to having a less stressful 2017 race year. He knows his career is coming to a close, and it is a bittersweet feeling for him and his crew. 28 PST wins and four championships, victories at I-96 and the Canadian Sprint Car Nationals at Ohsweken and appearances in Pennsylvania, Virginia, Ohio, as well as the Knoxville 360 Nationals have made for a successful career in Howland’s eyes. Soon, it will be time to hang up his helmet for good.

The most special win for Howland was the 2015 Canadian Sprint Car Nationals. He was pleased with how he drove through the entirety of the event and he’ll forever cherish his victorious effort.

“We’ve etched our name in the history books of the Canadian Nationals with Steve Porier, Shane Stewart, Wayne Johnson, Sam Hafertepe Jr., there’s just so many,” Howland explained. “To have Bryan Howland etched in there… it’s something that you can never take away.”

His father, John Howland, is one person he attributes a lot of his success to in his racing career. John provides the financial backing for the team and serves as the crew chief, working alongside Bryan in the race shop throughout the off-season and on weekends to get the car race-ready. Bryan says his dad has learned so much about how to set the car up, especially with shocks, which gave him big issues over the first half of his career.

But until September, Howland has a diverse schedule planned for 2017. He plans on making appearances with the PST at Woodhull on May 13, as well as two PST “Speedweek” shows – one in Ohio at Raceway 7 and the other in Pennsylvania at Mercer Raceway Park. He will also be at Utica-Rome for the final race of the Empire Super Sprints “Speedweek,” an event he looks forward to every year. In addition to local events at Brewerton and Canandaigua, Howland also wants one more shot at Ohsweken’s Canadian Sprint Car Nationals on September 15 and 16.