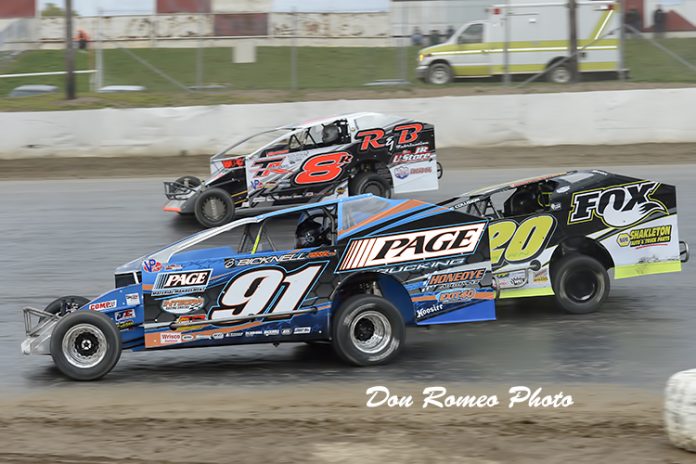 Billy Decker debuted with Mike Payne in 2016 at the Fulton Speedway with the duo coming out strong and winning the Super DIRTcar Series Highbank Holdup 100. On Saturday night, the pair made it two-for-two at Fulton Speedway as Decker dominated the 100-lap affair for his third consecutive win in the event.

“Whatever we do it seems to like it here,” said Decker afterwards. “Hopefully we can get a little more versatile other places. I like winning that is for sure. I thought we under achieved a little bit last year. We didn’t get the wins we needed so it’s always nice to start the series with a win.”

Decker’s Bicknell was good enough that he could move around to whatever lane he needed before the track locked down late. He ran the high lane, then the low lane before settling in the middle groove.  At the end he migrated back to the bottom as the track took a slight bit of rubber.

“The car was really good,” cited Decker. “When you are versatile like that it allows you to race in traffic and go where you need to go. You can go where they’re not. It was fun. I actually got a little nervous there when it started to lock down. That doesn’t give you much. You got to get there and stay there.”


Decker had a dominant car in the main-event after starting sixth, but it wasn’t without difficulty as he nearly lost the lead in the closing stages to Matt Sheppard. Sheppard stuck his nose under Decker as they raced into the third corner with only a handful of laps remaining.  Luckily, Decker was able to slam the door quick enough to keep Sheppard at bay.

“I was coming down and he was doing what he needed to do,” mentioned Decker about the battle with Sheppard. “Fortunately it wasn’t more than that. At that stage I was trying to get to the 22 (Brandon Walters) as fast I could to make a move before he could work me over. Obviously I didn’t get that done so I had to get in line.”

SHEPPARD GETS OFF TO A BETTER START

Matt Sheppard claimed the 2016 Super DIRTcar Series title, his fifth overall. That championship came on the back of a dominant summer, but it certainly wasn’t based on his results at Fulton Speedway to start the season. Sheppard finished 15th in the 2016 edition of the Highbank Holdup 100. His second place effort Saturday was a major improvement.

“We started 11th and passed a lot of good cars to get up to second,” commented Sheppard. “This was probably our worst race last year on the entire schedule, so to go from 15th or wherever we were last year to second is a big improvement.”

Sheppard was gaining on Decker prior to only caution of the race for a spinning Tim Sears Jr. Decker was in heavy traffic which gave Sheppard the advantage of observing which lane was best for him to make a move. Unfortunately, the caution came out negating any advantage he had. After that, the track took just a bit of rubber on the bottom forcing everyone into that groove.

As mentioned above, Sheppard stuck his nose to the inside of Decker. He had a wheel alongside but he wasn’t able to establish himself in the position allowing Decker to stay at the front.

“He kind of got a little excited I think getting into three and slid her up and hung her a little bit,” he said about Decker. “I just wasn’t close enough to fill the hole. We definitely made it interesting.”

PHELPS THE BEST OF THE REST

At the end it was clear that Decker and Sheppard had the best cars. Jimmy Phelps ended up being the best of everyone else behind them. The Baldwinsville, N.Y., driver’s Teo Pro Car was good, just not good enough to compete with the top two.

“We had what we had at the beginning and just needed something to come in and it really never did,” Phelps stated. “All and all we had a really good car. It just wasn’t good enough to run with them two. The guys behind me, I really wasn’t getting away from them. I can’t complain. It is our first race, series race and we got the series started on the right note. We got things on track. Hopefully we can build from here.”

Early in the affair Phelps challenged Brett Hearn for the lead. He got alongside of him on several occasions. That was the best he was able to do. Eventually he got by Hearn on the sole restart which moved him back to third. That’s where he’d level off.

“Sometimes, when you get on these tracks that are this slippery, the outside row gets a little bit of an advantage because they get a little more momentum rolling before they drop the green,” commented Phelps. “I think that was just it. I beat him (Hearn) down into one and we were able to roll in the preferred lane and take the line away. I think he and I got about dead even there before the yellow. He would get away from me on one lap then I’d reel him on the next lap. Our cars were pretty even. I just had a little bit better line into one on the restart. Fortunately we were able to hold him off and make it work.”

HEARN OFF TO SOLID START

On a day that he announced Shakelton’s NAPA Auto Parts and Truck Center as a new sponsor, Brett Hearn went out and held his own to earn a fourth place finish at a track that has been notoriously tough for him. It wasn’t a win, but it was day that yielded a positive start to the 2017 Super DIRTcar Series tour.

“I love running this place,” said Hearn. “It was a blast. The track was in great shape. We came out of the box good today. We struggled here last year for the Outlaw (200) big time. We made some huge gains. This is definitely a good way to start the series for us. To come out of here with a heat race win and lead half the race, we just got beat by a couple guys that are notoriously good in the slick. I’m pretty happy with that.”

TESTING HIS WAY TO A TOP FIVE

Like everyone else on the Super DIRTcar Series, Larry Wight is sick of chasing Matt Sheppard to the checkered flag. Because of that, Wight threw some different things at his No. 99L Bicknell car in an effort to improve.  The results were a fifth place finish.

“We had a good car,” mentioned Wight. “We were testing a lot of things at this race being that we know Fulton like the back of our hand. We knew we could throw stuff at it and still be able to drive the car. We didn’t come out with the win, but I think we really came out ahead with what we learned. We tried some different things to get an edge. We’ve been chasing Matt (Sheppard) for too long. It’s about time we utilize our resources to get to his level and beyond.”

Max McLaughlin expired a motor in his Teo No. 6H in heat race action.  The extent of the damage was unknown as the team quickly unloaded the backup car.  McLaughlin admitted that it was a new piece that he had yet to shake down…

Dave Rauscher was battling for a transfer spot in his consolation when he caught the implement tire on the bottom of the track in turn two.  That caused his front end to collapse necessitating a tow back to the pits.