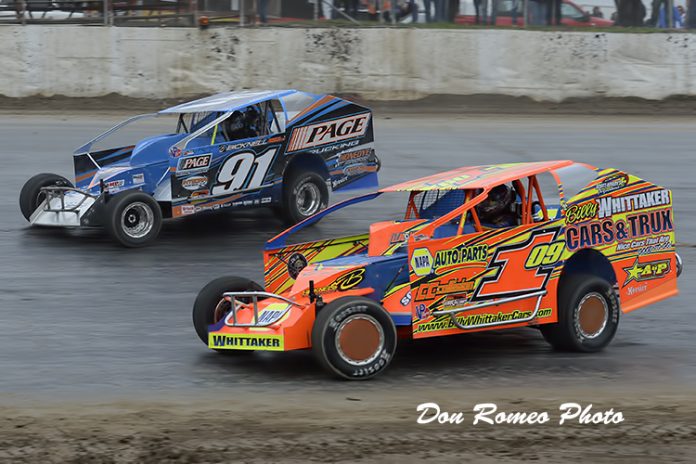 Saturday evening at the Fulton Speedway was a solid night for Billy “The Kid” Whittaker. The Super DIRTcar Series came into town for their first full point event of the season and brought along some stiff competition. 2017 is just Whittaker’s third year back behind the wheel of a big-block, but is already looking strong in his third race of the year.

A second-quick time trial lap in his group kicked the night off for Whittaker, which set him up for a victory in heat number two. This placed him in the Dig Safely New York redraw, where he pulled the pole position alongside Brett Hearn.

In the 100-lap “Highbank Holdup” feature, Whittaker led the first four laps before settling into sixth position near lap 25, where he would stay for most of the race. He would peek back into the top five around the three-quarter mark of the race, but would give up the fifth and sixths spots to Larry Wight and Billy Dunn before the checkers to finish in seventh.

Overall, Whittaker thought very positively of his efforts to capture a top-ten finish. Being a part-time competitor from Central Square, N.Y., he does not often get the opportunity to race with the traveling stars of the Super DIRTcar Series, but when it comes time to compete with the series, he loves every moment.


“They’re fast, obviously. These guys do this for a living,” Whittaker said. “But for me to mix it up and be competitive with them, it wasn’t like I was just driving around – I was right there with them. I could see them all, and that’s cool for me.”

The key to Whittaker’s success on Saturday was his strong effort in time trials. Forty other drivers, each gunning for the same qualifying spot on a slick racetrack can be overwhelming, but Whittaker knows just how to keep cool on the clock.

“For me on the series, it’s all about them time trial laps,” Whittaker said. “You get a good time trial lap and it sets you for the rest of the night.”

Anyone who has never been to Fulton Speedway most likely will not know how quickly the track becomes slicker throughout the evening, but most teams know to how to prepare. Whittaker tightened-up the car to brace for 100 laps and managed to stay out of trouble, hitting his marks all throughout the night.

Looking forward to running weekly at the Fulton Speedway, Whittaker hopes to see the momentum gained on Saturday night translate into even more success throughout his 2017 campaign.

“I’m hoping that his momentum carries over into the weekly deal where we can be really competitive and get some more wins,” Whittaker said. “We were fortunate enough to get one last summer. Honestly, on a Saturday night, you’ve got half of the series here anyways – it’s a tough deal.”

Whittaker would like to thank LJL Racing, Scott Jefferies and all of his volunteer crew members for their continued support.