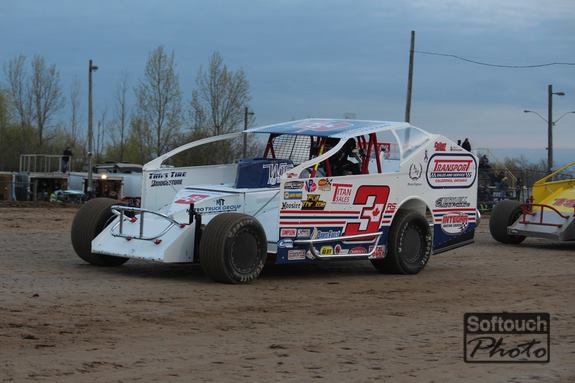 It took Ransomville, NY’s Ryan Susice seven years to earn his first career 358-Modified victory at the Merrittville Speedway and he finally went to victory lane this past Saturday night. “We’ve had so many good runs here and led races but were unable to finish them off but tonight was the night it all worked together” Susice said after the 35 lap feature event.

The 358 Modified feature saw the dueling 3’s battling for the win between “The Ransomville Renegade” Ryan Susice and “CB3” Chad Brachmann. Susice had the lead from the offset but just before the halfway mark, Brachmann was able to look underneath Susice coming off turn four to take over the lead. Just a few short laps later, Susice used the same move that Brachmann did to regain the lead. Susice would score the win, his first at Merrittville Speedway in a Modified and first win at the Thorold, Ontario oval in seven years. “We finally got the monkey off our back here” Susice said. “I really have to thank the Slack family for this opportunity. They put an awesome car together and it really is a dream come true to be able to work with a team like theirs” Susice added. “I cannot thank the crew, our sponsors, family and friends and fans for their continued support” Susice continued. Susice also added a qualifying heat race victory on the night.

In victory lane, Susice said “it was not about luck tonight, it’s about the hard work of the Slack Family … the crew and my family…. this one’s for Dalton. Tonight was a great turnaround from last week”. It was the third time at Merrittville that the owners of the famed #3RS that a member of the Slack family missed their drivers first win for the team. Saturday night, fourth generation racer and crew chief Dalton Slack was home sick and missed Susice’s triumph. It also marked the team’s third straight season with a win at Merrittville. The team’s first season in 2015, Billy Dunn from Watertown scored three wins and last season, “The Real Deal” Chris Steele scored one win driving the Transport Sales and Service entry. The biggest win to date for the team was Tim Fuller’s triumph at Oswego during Super DIRT Week last October.

The Sportsman feature saw two Ransomville regulars, Matt Farnham and Brett Senek leading the field with Senek taking over the lead with two of the best at Merrittville, Cody McPherson and Brad Rouse quickly entering the top three and reeled in race leader Senek. Senek had the advantage over McPherson after Brad Rouse spun in turn two to bring out the caution. Robbie Johnston spun in turn one to slow the field down on lap 12, just as the leaders started to hit lap traffic. McPherson took the lead on lap 18 after going three wide with Senek and Chad Chevalier who was driving for Paul Williamson this season. Chevalier spun in turn two to bring out the caution on lap 20, setting up a five lap shootout for the win. The tempers were hot all night long as Chevalier and Senek exchanged some extra-curricular activities. Chevalier was told on the one way to take his racer to the pits and Senek ended up on the business end of the CAA tow trucks, ending his night. Cody McPherson would hold off Brad Rouse and James Michael Friesen to pick up his first feature win of the season. Sportsman heat races were won by Matt Farnham, Brett Senek, and Rob Knapp. Rookie competitor Terry Larmet took home the feature and heat race win in the Novice Sportsman. “I ran a vintage car last year and I took off the vintage body and it was a Bicknell roller so I got a Sportsman body and put it on the car” Larmet said post race. A total of 28 Sportsman were on hand with 3 Novice Sportsman entries.

Third generation driver Brent Begolo led the opening laps of the Mod Lites feature over car owner Josh Sliter and “The Beamsville Bullet” Paul Klager. Begolo continued to pull away from the field after an early race caution with Sliter in second and Klager pulling into the pits with four laps remaining with an issue. Begolo would go on to earn his first career Mod Lite feature win in just his second ever start. Jeffrey May would edge out Josh Sliter at the line for second. Heat races won by Brent Begolo and Josh Sliter.

101 cars signed in the pits on Saturday night at Merrittville with 16 Small Block Modifieds, 25 Sportsman, 3 Novice Sportsman, 18 Hoosier Stocks, 15 Mod Lites and 24 Four Cylinders all anxious to kick off the 2017 season and their run at the Merrittville Speedway track championship.

Before the racing action got started at Merrittville, my Dad and I had the opportunity to take a trip to St. Catharines, Ontario and to the shop at Bicknell Racing Products for a tour with my good friend Dana Curvin, who is also the head announcer at Merrittville. We have been by the shop on several occasions and never had the time to stop in but there we were on a tour of one of the most dominant racing chassis shops in the entire Northeast.

The one thing that I didn’t realize about the shop at BRP is that they do all their fabricating on site. They take all their parts to be laser measured to a nearby company and have it back within the day. Bicknell Racing Products is equipped with CNC tubing bender for bending mild steel and stainless as well as aluminum. Accuracy and repeatability of bending is greatly increased because computers control the bends. The machine is fully computer controlled and accuracy is extremely precise. They are capable of bending small production runs or large production runs. The machine is also capable of mandrel bending thin wall tube or bending thick wall tubes so any type of material is capable of being bent. The CNC tube bender’s accuracy and repeatability has greatly increased production capabilities in our chassis department, where accuracy is crucial. Our in house machine shop offers a full line CNC equipment. Powered by the latest in computer software, these machines are capable of turning raw materials into any custom part you may require in a variety of materials. Couple that with their in house design team, and BRP can take your idea to finished product! Bicknell Racing Products not only sells parts and components, but they also install the parts on your new chassis for you. BRP offers a full race car assembly shop that prides themselves on building the best race cars on the market. From simple brake line installations, to full on engine installation services, BRP can handle any request you may have. BRP also offers a complete rear end rebuild facility as well as transmissions, steering boxes, and everything in between! I cannot thank Dana along with Pete and all the staff at BRP for letting me go on a personal tour and showing me everything that they offer.

The annual Test, Tune and Time session at the Ransomville Speedway was postponed this past Friday night due to wet grounds this past Friday night. “Heavy rain late on Thursday night caused wet grounds and the property was too saturated so we canceled the Friday Test, Tune and Time” Ransomville Speedway General Manager Jenn Martin commented. “We will be having a practice session and pre-tech on Wednesday May 3rd at 7:15pm with the rain date of Thursday May 4th if needed” Martin added. Ransomville’s 60th season opener will take place on Friday May 5th featuring a full card of 358 Modifieds, Sportsman, Street Stocks, 4 Bangers and Novice Sportsman. The 358 Modifieds and Sportsman will be having time trials with the pole sitters earning 55gl drums of VP Racing Fuel.

Sunday at the Humberstone Speedway over in Port Colborne, Ontario would have been the 2nd annual Dawn of Destruction event but Mother Nature made other plans so the event will now take place on Sunday May 7th at 1:00pm. Humberstone also announced that Maple Leaf Foods is now the divisional sponsor for the RUSH Late Models and the announcement of upgrading the concession stand with a state of the art Point of Sale system as well as allowing debit cards to be used for purchases at the concession stand and at the ticket booth. “Allowing debit cards and our new Point of Sale system for the main concession stand will speed up the time our fans have to stand in line to great the great food from our concessions” commented Humberstone General Manager Bob Davidson.

Humberstone’s 58th season of racing will begin on Sunday May 21st with a full card of racing featuring the Sportsman, RUSH Late Models, Street Stocks, Mini Stocks and Pro 4 Trucks plus a 4 cylinder demolition derby. Opening Night is featured by the inaugural visit by the BEI Lightning Series for the Sportsman. “Humberstone is honored to be the first race of the BEI Lightning Series and we are proud that the first race of their season is here on Canadian soil” Davidson added. Opening Day will kick off at 3:00pm with a pre-race Tail Gate Party featuring a Motorcycle Show and Kids Power Wheel Races. Racing will begin at 6:30pm sharp.