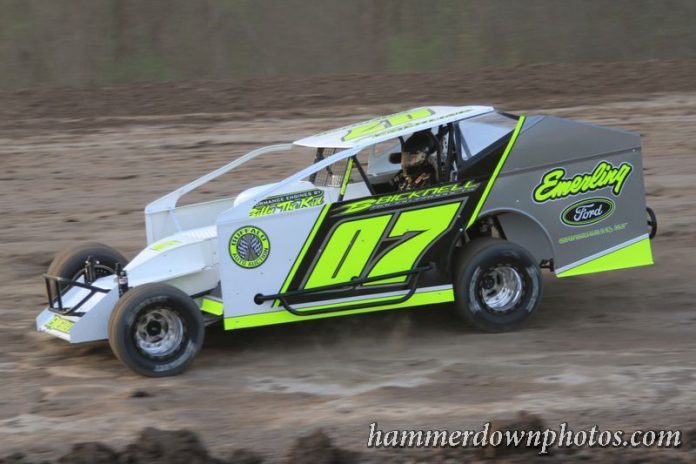 Patrick Emerling, fresh off a third place finish in the Race of Champions Modified Series opener at Lancaster National Speedway, made his dirt racing debut on Sunday night at the Utica-Rome Speedway. The Holland, N.Y., pilot is looking for a different challenge to go along with defending his RoC title on the asphalt.

“It is something we wanted to do for years and finally we were able to do it this year,” said Emerling. “We got a dirt car from Bicknell and threw a motor in it. We are going to give it a shot. The dirt scene is very competitive.”

Adding dirt racing to the fold made sense for Emerling as he doesn’t have as nearly as many pavement options as compared to the dirt. He would like to do more beyond running the Race of Champions tour or traveling hours to run in the east with the NASCAR Whelen Modifieds. His Holland, N.Y., home is close to several dirt tracks making it a logical choice to go dirt racing.

“Around us, Western New York, the pavement track racing is little bit dead,” mentioned Emerling. “We wanted to run locally, within three hours or so, but run very competitive. We run the RoC series, which is a great series for us to run. To run the Whelen tour stuff you have to travel. It’s an awesome series to run. It’s very competitive but you got to travel really far so for us it doesn’t fit. The dirt seems to be a lower cost. It’s very competitive at a lower cost. The purses are better and there seems to be a million dirt cars around. It seems to be a much bigger scene here in New York. It’s where it’s at. It’s kind of like out east the SK (Modified) racing is real big, asphalt Modified racing is bigger, but in our area the dirt seems to be where it’s at. It looks fun.”


Emerling’s goal with his new challenge was to simply gain seat time and get laps while staying out of the way. He doesn’t have many expectations as he moves forward with the new endeavor. He just wants to learn, and at some point, become competitive.

“For the first time out, no laps on the car, I just want to go out, turn some laps and gain some experience,” cited Emerling. “It’s going to take a while for us. I’m going to need experience to run with these guys in these cars. We have no expectations. We want to go out and run laps and stay out of people’s way.”

Originally Emerling had planned to run Freedom Motorsports Park on Friday nights, but with the addition of a veteran presence in the pits those plans have been altered slightly. Sunday night Emerling was assisted by former Utica-Rome Speedway regular Todd Burley. Burley was the 2001 Modified track champion at Utica-Rome. He’s currently tied for fourth on the all-time list with 32 career victories. Having Burley in his pit area is a major help for Emerling during his transition.

“He was put in touch with us through a friend of mine Bob Reis,” commented Emerling when asked about Burley. “It will help with the learning curve having an experienced guy who did very well over the years. That is going to really help with the learning curve versus trying to figure it all out ourselves. It’s better than spending seasons upon seasons doing that. I can hang around someone that can give me pointers on driving the car and learn how to adjust to the dirt tracks. That is a big thing for me.”

The schedule for Emerling includes nearly 20 dirt events over the course of the 2017 with Sunday night being the first. It’s a fluid schedule that is subject change based on what time allows.

On Sunday, Emerling was able do everything he wanted to do Sunday as he battled the challenging track conditions. Emerling ended his first night in a dirt Modified a respectable 16th.