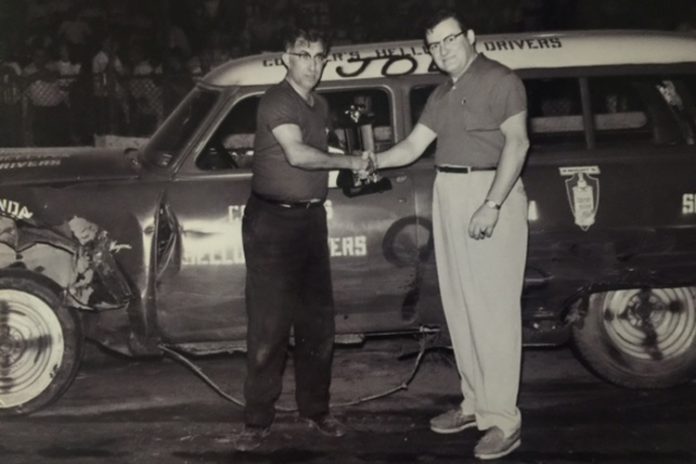 Friday we made our first trip of the season to Albany-Saratoga and although we thought we were early, the parking lot was evidence that a big crowd was already there and a bigger one coming. There was just shy of 170 cars in the pits, which is a feat in itself, parking all those cars in the pit area. As we stopped by the scale area we ran into a young many scaling his Four Cylinder. Johnny Bruno was in the No. 11s and before the night was over he became a third generation driver to compete at the Great Race Place. He finished third in the feature. Johnny is the son of Mike Bruno. Further along in the pits we saw the Andy’s Speed Shop parts truck and sitting alongside was Mike and Andy Romano. Alongside the Romano’s was Andy’s new No 97 Modified driven this season at the track by Peter Britten. Between Mike and Andy there is not much they haven’t done in racing and together have put over 100 years in the sport. Andy began racing following in the footsteps of his father, Joe who we found in an old photo receiving a trophy at Fonda in 1964. In his racing days Andy raced all over the east coast on both dirt and asphalt. Mike began as a fan at five, later becoming a driver racing all over the east coast and Canada. After hanging up his helmet he went into the parts business, supplying parts at several local tracks and parts and chassis out of the Romano Speed Shop in Johnstown. Mike was a car owner and a few years ago partnered with Jake Spraker promoting Glen Ridge Motorsport Park. Before leaving the Romano pit area we spoke with current driver Peter Britten and he said things went very well that night and after a few adjustments they should be in the front. Britten started 12th in the feature and finished fifth.

We made our weekly visit to the Fonda Speedway Museum on our way into the track on Saturday. The Museum under the direction of Dave and Jackie Lape was honoring Steve Danish with a tribute night with many Danish memorabilia items displayed prominently in the museum for the night. Several fans were there sharing memories of the “Cropseyville Courier” who helped make the Track of Champions. His record of 12 consecutive wins in a season still holds today.

The Lape’s are currently working on a new display featuring three of Fonda’s most winning drivers, Jack Johnson, Lou Lazzaro and Dave Lape. Ed’s contribution to the effort this past week was to look up the top five finishes for all three. The results show why these three were also three of Fonda’s most famous chauffeurs. While in the museum we ran across a young lady busy coloring a picture of the Lape No. 22 for her grandfather who is currently in the hospital. Her name was Cassidy, a real enthusiastic young fan who thanked us for taking yer photo and then said, when I hear race cars, I’m out of here. Cassidy and her family would be headed for the grandstands where they planned to cheer on their favorite driver, Bobby Varin. Unfortunately for Cassidy, on Saturday Varin was not at Fonda. He was with the other DIRTcar stars at Fulton for the DIRTcar Big Block Series. We doubt that this dampened her excitement for the night. It was great to see a young fan dedicated to the sport we all love.

We spoke with another museum attendee, Jim Osterhoudt, son of longtime auto racing journalist, John Osterhoudt. John wrote for several publications and had a unique way of waving to people he liked. He would flip them the bird. John also had a great passion for the New York State Stock Car Association and worked tirelessly at many of its events. Jim said so much has changed over the years. “At one time I would come to Fonda with 20 other people and now I am here by myself.” It you haven’t stopped by the museum yet, make it a point to do so. It’s well worth the time. Saturday we also spoke with many fans about the passing of Fonda, NYSSCA and DIRT Motorsports Hall of Fame member, Irv Taylor. Taylor currently lived in Crystal River, Fla. He is survived by his wife, Dorothy and three daughters, five grandchildren and three great-grandchildren. He requested no calling hours and burial will be private. Taylor could be seen at local tracks during the summer when he came to New York and visited area tracks each weekend, faithfully riding his motorcycle on most occasions. As we spoke with those who knew and loved Irv Taylor we heard many stories about the man who loved adventure. We saw Irv at Volusia Speedway in Florida each winter and this past February we shot this photo of Irv in the grandstands doing what he loved.

The show at Fonda on Saturday ran in short order, the racing starting at 7:00 pm and the last feature was checkered at 9:25 pm. A quick show at the start of the season is always welcomed by fans and others alike. The Pro Stock and Sportsman features brought repeat winners with Kenny Gates and Rocky Warner respectively. In the Modified feature the runner up in 2016 Modified points, Jeremy Wilder sat in victory lane, giving him a total of seven wins at the track. In victory lane, Jeremy said, “It’s great to be in victory lane this early in the season. The track was beautiful.” He thanked management for the great track prep. Jeremy also told everyone that he now has Tadd Parks as sponsor on his No. 24. The car is owned by Bill Scoons, pictured here with Jeremy. As the team celebrated in the pits after the show, Jeremy said, he was third in points in 2015, second last year and now there is one goal left, to be the point champion.

In closing we send our condolences to the family of Irv Taylor. Until next week please send all news and/or comments to biittig@yahoo.com