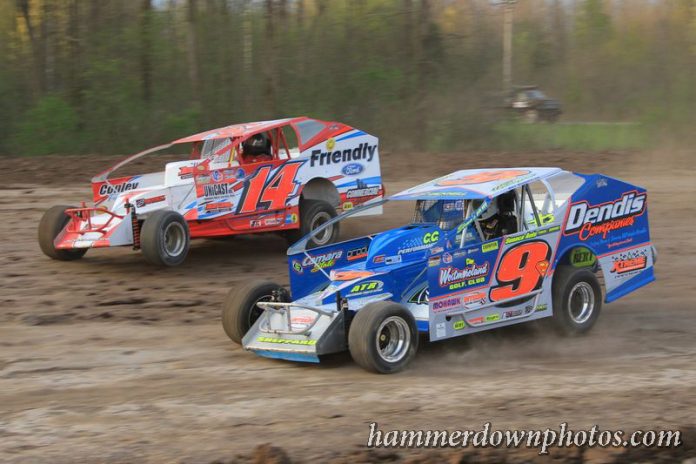 Racing stories don’t always come from the track action, but impacts of something away from the surface have an impact on drivers and crew members.

Last weekend over 50 Sportsman poured into the pits at the Fulton Speedway and along the tree line in the back of the pits were a couple of teams that simply put their cars on an open trailer and haul them to the track to participate in the sport they love.

The Mikey Wight car was back and the Novice Sportsman apparently was ready for the new year. But, something major had changed as Tom Mackey was going to be behind the wheel.

Twenty-two year old Wight had sustained a life altering injury away from the speedway. On April 9 he was putting air in a boat trailer tire when it exploded. Portions of the rubber went into one of his eyes and serious injuries sent him to the hospital. The surgery was difficult and challenging and more operations are on the way.


He found the energy to come and sit in the pick up truck along with spending a little time visiting his team, but headed home early to get some needed rest. He said he wants to be back next year.

During the weekend Sportsman driver Jason Rood was donating bunk beds he had to someone who needed them. Two older gentlemen came to his house and in loading the beds on of the men suffered a fatal heart attack. Jason was devastated.

I know how Jason felt as when I was a reporter I had a 17 year old die in my arms as the New York State Trooper went for the first aid kit. The teen had been hit by a falling tree limb while logging. Memories like this linger for a lifetime. Talking about it helps.

Both of these men saw how quickly life can change in an instant. They were impacted by their situations and recovery should take time so if you see either and they want to talk…listen. It will be appreciated.

When you are announcing and walking the pits on weekends like this past one you get into a “brain overload” situation. You talk, listen and move on to the next team. After a while your head is like mush and though you want to remember everything it simply isn’t possible.

The Super Dirt Series Modified Tour commenced with just over 40 cars. For Billy Decker it was his third straight Highbanks Holdup victory while Matt Sheppard put on a great effort attempting to chase the 91 down.

If you saw back and tried to watch the majority under green event you had to be interested in the runs by Stewart Friesen and Alan Johnson from beyond the 20th starting spots. Billy Whittaker was sensational and ran in the top five most of the event as he didn’t even qualify last year.

Race results stories have already been printed so as always I will try to go behind the scenes.

Mike Bowman (with help from Uncle Andy Phelps) has a brand spanking new Bicknell with Quad Tech as the major sponsor and NAPA along with Klaben Nursury still on board. Mike will concentrate on Fulton and Brewerton.

Andy Noto was in the pits as he purchased a former Chad Phelps car. He had a 358 in the car for Fulton, but will have his big block in it this coming week. He will be a regular.

Mike Maresca flipped his car at Utica-Rome the previous weekend and he was at Fulton for the kick off with a different car.

Jimmy Witko had a new car at his disposal and will run Fulton and Brewerton. He lost 44 pounds during the off season and said, “If I am going to have a new car then I have to be ready and fit to drive it.”

Mod heats were won by Brett Hearn and the other winners all came out of the same shop with Whittaker, Pat Ward and Larry White coming home in front.

Max McLaughlin had a huge plume of smoke pour out of his engine in his heat. In the feature he got over the rear end of Tim Sears Jr. and went up in the air in turn two.

Robbie Bellinger has switched back to a Troyer in ’17 and couldn’t get the handle or hold of the track in the 100 and dropped out just past the midway point.

On the 91st lap of the main Decker and Sheppard made contact, but neither sustained any damage.

There were just eight laps to go when Larry Wight knocked Whittaker out of the top five for the first time in the event.

Jimmy Phelps was relatively uncontested in third for most of the race while Brett Hearn settled for fourth.

Decker noted “the car was a bit tight the last 20 laps.”  He continued, “I like coming back to Fulton.”

On the day he said, “We struggled last year, but this is a good start.”

Sheppard indicated “He (Decker) was a little batter and I time I thought I was better. We didn’t have the best draw, but it is a great start to the series”.

Phelps indicated “missed it a bit and we were close but just off a bit. We were okay, but not good enough. To be in the top three with this group is special and we will keep digging.”

A.J. Kingsley and dad Eric are back in the late models, but there is a number 2 on the car this season.

A.J. said, “I did it to remember by great grandfather as that was his number when he won at Daytona on the beach back in 1927. His name was Edwin Omps.”

He went on to explain “He was also an experimental pilot and died flying the ‘Spirit of Daytona’ when it crashed into Lake Daytona.”

A.J. went back to the old car and I got the feeling that his dad wasn’t exactly 100% behind the decision.

Ron Davis – What A Difference A Year Makes

Ron Davis III has a Teo under him this year and has been getting some help from Matt Hearn.

Last year he was in contention to win the Sportsmen Tour crown right until the final race.

This past weekend he ran both events at Fulton and Utica-Rome.

His dad told DTD “At Fulton (in hit on the backstretch) we broke the front axle, radius rods, and axle brackets. Saturday we couldn’t get a hold of the track and we made changes for Utica. At Utica we were much better, but the rear axle broke (while running in the top three).

Continuing he said, “Last year we ended up second in the DIRTcar points and second at Weedsport while wining two championships so it wasn’t too bad.”

They expect to get the handle on the new car as Ron III said, “We kept the old car as I didn’t want to sell it and get beaten by it.”

Sportsman driver Jessica Power had her first ever new car as a new Bicknell joins the old car. She drives past Brockville and Can-An every week to run Fulton and indicated she enjoys the competition…

Ryan Jordan, who will also be a regular Modified runner at Fulton, has a new Hig Fab under him…

There were lots of invaders in the Sportsman DIRTcar Tour event. The new format will allow Central New York drivers to be competitive and have a shot at the title….

Larry Kelleher was solid in the B Main and just missed the main by one spot….

Chuck Hebing lapped his daughter Kelly in the final laps. However, Kelly joined the family in victory lane…

51 Sportsman and 41 Sprinters on Friday night…

Larry Wight flipped in the main after contact with another car. The front ends touched sending the 99L over. Wight’s car sustained substantial damage.  He’ll need a new car..

BTW must have been an off-season to lose weight at Pat Ward lost 30 pounds.

Though there weren’t many fans for the DIRTcar Mod regular show and the Tour for Pro Stocks and Sportsman it was a decent night of racing on a track that Mike Mallett stated had “character in places.”

It was good to see 24 Mods pit-side and probably J.F. Coriveau and Yan Bussiere won’t be back, but maybe a few others will show up to join the weekly competition.

Solid Pro Stock and Sportsman fields were on tap and those who saw it won’t soon forget the Pro Stock 30 lapper. Robbie Speed, Luke Horning, Rob Yetman and others put on one hell of a show. Speed got Yetman on the final lap. The race had everything a fan could want and came right down to the final lap before Speed won his second consecutive race of the year.

In the Sportsman race, Rocky Warner won over Dave Marcuccelli as Dave was on the receiving end of contact in the late going. Dave, who finished third at Fulton in the Friday Tour event, was missing in action from the podium top three interviews.

Mod winner Matt Sheppard wasn’t happy with track conditions, but ran away for his 33rd UR feature win which ties him with Richie Evans.

Pro Stock drivers from Quebec and the Eastern part of New York invaded. It was a solid field…

Horning was right there in contention in the end when Speed got him, but the replay showed Speed had all four tires off the ground and couldn’t be totally blamed fro the contact. Horning was then hit by Stephane LaBrun as both cars were out with only few laps remaining…

Marc Johnson ran up front much of the race, but had to settle for fourth as Mahaney got him off the final turn…

It was a contact sport in the Mod main and as the result fifth place Danny Varin was upset (apparently with Alan Johnson) and parked his Mod behind Sheppard in victory lane, talked starter Matt Burdick and the car was towed to the pits…

Claude Hutchings Jr. ran as high as fifth, but settled for seventh behind Alan Johnson…

Pavement Mod hotshoe and top Race of Champions runner Patrick Emerling was pitside with Todd Burley as crew chief. He’s got a small block Billy the Kid powerplant, but he is trying something new. See story written by Mike Mallett on DTD front page…

Live weekly video is available of UR races on DTD. This is a pay per view for those folks not being able to attend…

I’m sure I’ve left things out, but as I noted at the beginning of the column…”brain overload”.

Comments or news can be sent to foley395@hotmail.com.