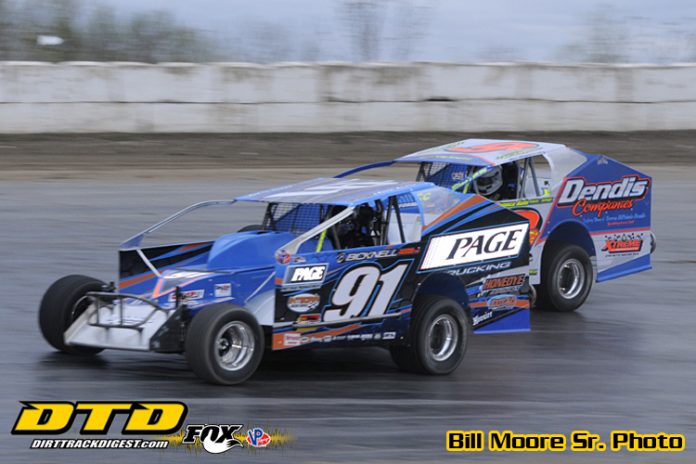 There were so many great things that happened over the weekend on and off the racetracks that I couldn’t begin to touch on all of them here. Race results and reports are available in other columns here at Dirt Track Digest if you want “the skinny” on how the weekend went at these two tracks. I will say I was impressed with car counts, and especially impressed with the quality, both in competition, and in the efficiency of how the events were run on Friday and Saturday at the High Banks Holdup. Sunday was better too after the new clay had another week to attempt to settle.

I hope the many loyal fans that attend all three tracks I’m at weekly begin to appreciate the length the staffs go to so you experience the quality you see every time the gates open. I also hope that the quality of racing we get to enjoy, and the caliber of drivers that show up every week leads you all to encourage your friends to check out the races with you.

Friday there were 41 360 cubic inch Lucas Oil Empire Super Sprints in attendance, along with 51 DIRTcar Sportsman for a tour event. Even though the start time was slated for 7PM I was parking my car at home at around 11:30 after every the 50 mile drive home after every feature race was finished. That’s pretty efficient racing. Saturday was just as good with 41 Super DIRTcar Series Modifieds, another full field of DIRTcar Sportsman and a full field of 604 Crate Late Models. I spent so much time in the pits over those two days I’ll have to check the press releases like you to find out who finished where.

Sunday afternoon at Utica-Rome Speedway the DIRTcar Sportsman and DIRTcar Pro Stock Series brought out some very stout racecars and put on a spectacular show. In all 93 cars in three divisions filled out the pits. Every feature was full of some unexpected turn of events, but the body check pass by Robbie Speed to overtake Rob Yetman was more like watching two hockey players with a run to the boards. Needless to say there was a definite reaction from the fans. There were plenty of other exciting moves all night that caused a few “WOW” moments.

Brewerton Speedway is slated to open this Friday, with sister track Fulton Speedway gearing up for another great Saturday night show. The DIRTCar banner over Utica-Rome gives teams some consistency and the option to extend their weekend into three nights of racing toward season points. There are a lot of positives this year, so I’m hopeful going forward that everyone has a great season.


One conversation I had over the weekend was about a phrase used at the Super DIRTCar Modified meeting on Saturday at Fulton. It was quite chilly, with a relentless southeasterly breeze blowing steadily over the cool waters of Lake Ontario. This super cooled air was flowing over the Fulton Speedway all day. With the fans comfort in mind, one of the DIRTcar officials made the statement that this show was going to be a “turn and burn”, implying the expectation of the greatest level of cooperation and efficiency from the teams to move the show along as quickly as possible.

That phrase reminded me of some old school extremist preachers that delivered hell-fire and brimstone messages warning their audiences to “turn or burn.” Even though they may have gotten the core of the message doctrinally right in, the overall message wasn’t the true Gospel of Jesus Christ. Let’s face it, the idea of going to hell as payment for our sins isn’t good news, and the word “Gospel” literally means good news. The Gospel message has always been about the Kingdom of God, not the prison He created for fallen angels and demons called hell.

John the Baptist was the last of the Old Testament Prophets, arriving on the scene about 6-9 months before Jesus Christ. John’s mother and Mary, the mother of Jesus, were relatives, so John was Jesus’ cousin. John was born to a Priest named Zacharias that served in God’s Temple in Jerusalem, and he and his wife Elizabeth were both advanced in their years when John was conceived. Elizabeth was pregnant for John when Mary went to visit her right after she had miraculously conceived Jesus. John was born shortly after Mary’s visit to Elizabeth.

Years later when both young men were around 30 years old John returned from a journey through the wilderness to preach to the “lost sheep of Israel”. His message was intended to prepare the way for Jesus Christ to enter into His earthly ministry. John began baptizing in the Jordan River as people were turning their hearts back toward God in response to His message. When Jesus Christ entered the scene John declared, even though he was a great prophet of God himself, that he was unworthy to untie the straps of Jesus’ sandals, which was his way of saying he was so much lower in righteousness and holiness than the Christ (Anointed One, or Messiah).

One of John’s statements is recorded for eternity in the Gospels. Luke recounts it this way:

“John answered, saying to all, “I indeed baptize you with water; but One mightier than I is coming, whose sandal strap I am not worthy to loose. He will baptize you with the Holy Spirit and fire. Luke 3:16 NKJV”

Baptism in Christ represents a dying to sin by identifying with His death, burial, and resurrection. As a person is immersed under the water they are identifying with the grave Jesus was placed in. By being lifted up out of the water they are identifying with Jesus’ resurrection, which indicates they are entering a new life free from the bondage of sin. Before baptism comes repentance, which means “to turning away from toward”. In context, repentance is turning away from the things that prevent us from entering into God’s holy presence, and turning our heart toward Him for the forgiveness and grace to bury those things for good.

When we acknowledge Jesus Christ by faith in His finished and complete atoning works on the cross, and receive Him by faith as our risen and returning Lord and savior, we receive an instant spiritual transformation. God gives us a new nature. He then inhabits our spirit with the Holy Spirit to seal our redemption until the day our Lord returns for us. That’s Good News!

So, getting back to that phrase used by the DIRTCar official, “turn and burn” can be applied to what John said in a positive and faith affirming way. The true Gospel is one of redemption, one of salvation, and one of promise which declares that if we turn our hearts away from our sins, and turn toward God for grace, we receive far more.

To turn and burn implies that those who accept the finished works of Jesus Christ as the sole source of their salvation, and apply their faith to receive Him as their resurrected Lord, will receive a Baptism into Christ which releases the fire of God in their life. The zeal of the Holy Spirit empowers them to turn away from sin and to live a life of purpose by following His lead.

Now that’s good news if you ask me. All God wants from us is to hear us make a sincere declaration of faith, and His response will be an extension of His favor and mercy.

This simple prayer, spoken sincerely to God, could be the beginning of a new chapter of your life:

Dear Father in Heaven:
I realize and acknowldge areas of my life have fallen short of your holiness, just like John saw in his life when he saw the glory of the Messiah. Because of this, I’m turning away from those things and turning my heart toward you. Forgive me for my sins, wash away my guilt, and fill me with your Holy Spirit. Right now I acknowledge Jesus Christ as my Lord, and becasue You raised Him from the grave I declare I am now dead to sin and alive in Christ. Thank You for your mercy and grace. I receive them right now by faith in Jesus Christ my Lord, in Whose name I pray, amen.

If this is the first time youve prayed like that, congratulations! You’re now a child of God, and the Holy Spirit will empower you to live for Jesus Christ. Let us know so we can get you some resources to help your faith grow. We can be reached at: flchaplain@windstream.net

I’ll see y’all soon at one of my weekly tracks. Until then, realize you’re blessed to be a blessing. Burn bright.