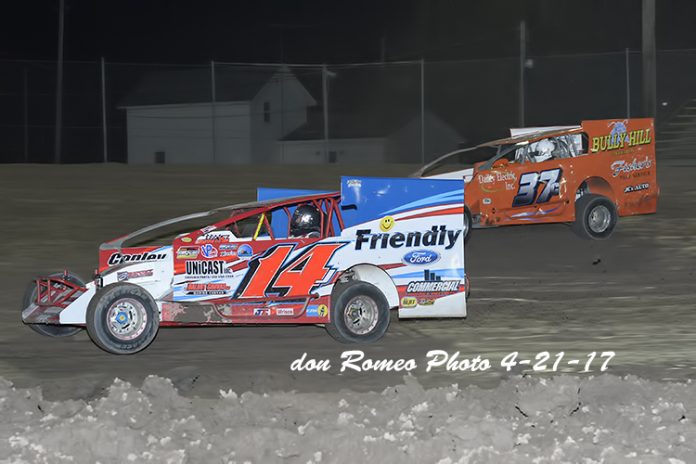 There aren’t many drivers who have won a Modified race for 43 consecutive years.

That short list might include active drivers Brett Hearn, Jimmy Horton and Billy Pauch, but there probably aren’t too many others who have achieved what Central New York legend Alan Johnson has.

It was back in 1974 when Johnson started his illustrious career. He said, “I was just 16 years of age when I first started driving and I didn’t win anything that year.”

To put things a bit in perspective in 1974 gas was 55 cents a gallon, a new car cost around $3,750, Richard Nixon became the first President to resign, gasoline rationing was in full speed, the pocket calculator appeared for the first time and movie goers were watching “The Sting”, “The Exorist” and “Blazing Saddles”.


It was a different time.

However, it didn’t take all that long for him to chalk up win number one of his 544 career victories as he won a 35 lapper at Canandaigua the next year in a family owned 14j.

As the 2017 season commenced Alan drove the Mark and Anna Spoor 14j to victory at The Outlaw Speedway to stretch his winning steak to 43.

Reflecting on the long career Johnson said, “I never knew year-to-year who I would be driving for. I just wanted to race and you never think about how long you are going to do this.”

Continuing he said with a smile, “Well, the news media says I have won for 43 straight years so it must be right. The media said it.”

There was that one year that the streak appeared that it might end. Alan said, “There really wasn’t any pressure because I wasn’t exactly thinking about winning every year, but in 2014 I went all season without a win. It came down to the last race of the year. While many of the teams went to Charlotte there was a show at Dundee and it was late October. I was able to win on the final race of the year to keep the streak alive. It was a satisfying win.”

Forty-four years of racing is a long time, but Johnson has proven to be one of the best at wherever he shows up. He has won at 39 different speedways with the bulk of his success right in his back yard at Canandaigua, Brewerton and Fulton as well as the run up the Thruway to Ransomville.

However, he has also won on what are called the “lost speedways” or tracks that are no longer in existence and some of these include Erie County Fairgrounds, Waterloo, Flemington and Penn National.

Big-block or small-block, Johnson has been pretty successful and if you look at his career it is a veritable who’s who in racing who have owned cars that he has competed in.

Reflecting on his rides, Johnson said, “Some of the best rides had to be the Mike Maroney small-block, the big-block ride with Jeff Rudalavage as well as the Jim Beachy Pillsbury car. I also will not forget the experiences and wins in the Tico Conley car. I’ve had some pretty good rides. There were also many other good car owners that I drove for, but memories with Maroney, Rudalavage, Beachy and Conley stick out in my mind.”

Continuing he said, “Kenny Saya kept me going in recent years and I really appreciate Mark and Anna Spoor who I will be with this year.”

Racing is a funny game especially when you are making a living from it. Alan said, “It is hard getting rides now as today it is family type of teams.”

He actually thought he was in a situation years ago when he drove for Al Heinke. He said, “I was holding out for the Heinke deal and thought I could race with them until I retired. It didn’t work out as expected.”

However, today Johnson continues to run toward the head of the field. He has gotten off to a relatively good start and just two weeks ago was leading at Utica-Rome and apparently headed for win number two of 2017.

Alan said, “The drive shaft broke when we were leading. That stuff never happens when you are running in tenth place, but it just did. There had been a vibration for a couple of laps prior to it breaking. So I sort of figured out that the u-joint was going.”

Johnson is appreciative of what he has under him in 2017.

For years Alan Johnson noted he raced year-to-year and in talking with him fans can anticipate that there is no retirement tour in the immediate future.