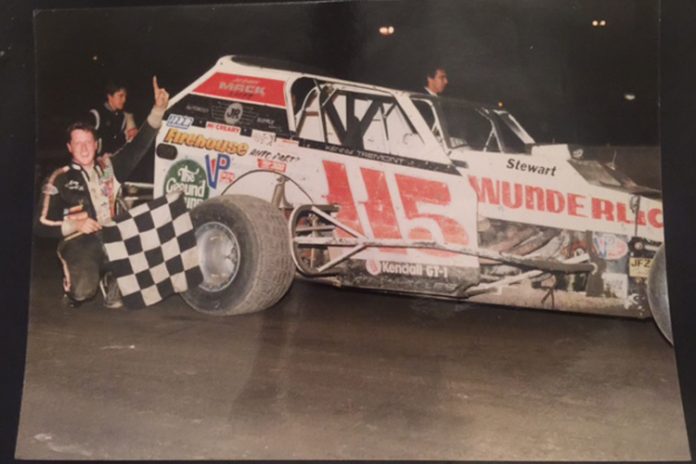 This weekend’s weather was not favorable to racing. On Thursday we started to get messages that tracks would not be running on Friday because Friday was forecast to be a washout. On Friday the same messages started to come for Saturday. Much of the state was affected by the weather pattern that moved in. After being washed out at Albany-Saratoga and Fonda we started looking at the possibility of no local racing this past weekend. But as anyone knows familiar with Lebanon Valley promoter, Howie Commander, he seems to be able to look past the impending weather for the proverbial rainbow. The Lebanon Valley area was hit by much of the rain on Friday and into the early morning hours of Saturday. We began checking with relatives and friends in the area of the track and received the message that they were pumping out the infield, the rain had stopped for much of the day and things were a go for racing at The Valley on Saturday. Checking the weather map it looked as though the rain was coming sooner or later but we made the trip with the hope that we would see some racing. Arriving at The Valley we stopped by our nephew, Kyle Hoffman’s pit. Kyle drives one of the DKM chassis at the track and on Saturday Stewart Friesen was also behind the wheel of one of the DKM chassis. There were 26 Modifieds in the pits Saturday; Kyle won his heat and Stewart being a non-regular started in the rear of his and just shook the car down to prepare for the feature. Kyle’s win put him on the front row of the feature however we never got to see the Modified feature. The lights at the track went out for a short time and when the staff was able to get them back on, a bank of them in the third turn did not come. This led track management to make the decision to call the show after the Pro Stock feature, setting up double features for the Mods next week.

As always there was grumbling about cancelling the Mod feature but as we learned later it was extremely dark in turn three and would have made it dangerous for the drivers and officials. It has always been our belief that if a track takes the safer route we applaud them and in this case they did. As we walked around the pit we found a familiar face, Kim Lavoy standing beside her No. 3 small block Modified. Kim has been racing much of her life, starting in go-carts at seven years old and then driving Sportsman before moving to 358 Mods. Kim is looking forward to racing this year and hopes all her bad luck is in the past. In checking Kim’s record in 358’s at Lebanon Valley, she has three wins and 12 top fives. Kim has a dedicated supporter in her dad, Rick Lavoy who is always in her pit area working on the car and cheering her on.


Also at Lebanon this season as the backstretch flagger is NYSSCA Hall of Famer, Kenny Marshall. Kenny has been involved in racing in some capacity as long as we’ve known him, predominately as a flagger; Orange County for years, SDW in Syracuse and most recently with the CRSA Sprints. “I go wherever I’m needed,” said Kenny and that has always been Kenny, he is always eager to help. Kenny grew up in racing with his father NYSSCA and Fonda Hall of Fame member Paul Marshall. After the 358 Modified feature we stopped to congratulate winner, Olden Dwyer. Olden now has two wins in the division and 15 top fives since he began in 2013. Olden’s dad, Ron was a Modified driver at the track for many years and he was right there on Saturday to enjoy the victory along with Ed’s brother, Rich as we shot this photo.

Due to the forecast of rain for this past weekend and knowing we possibly might not get any racing in, we did some searching through our records for something to do for DTD.

Looking back 35 years to May 29,1982 Lebanon Valley ran two Modified main events, due to rain the week before on May 22nd. Dickie Larkin won the first and little did anyone know that history would be made with the second. The second feature ran from green to checker and at the end a first time winner stood in victory lane. Kenny Tremont lapped car after car in the feature and when the checkered flag fell was 3/4 of a lap ahead of the Hughes Brother’s No. 57 with Tommy Corellis at the wheel. Kenny continued on that year winning his first track championship and opening the record books for years to come. Tremont now has 126 Modified wins and a total of 13 Modified Track Championships, and he is not done yet. That same year Kenny won his first feature at Albany-Saratoga where at the close of 2016 he has 70 wins.

Until next next week please send all news and/or comments to biittig@yahoo.com