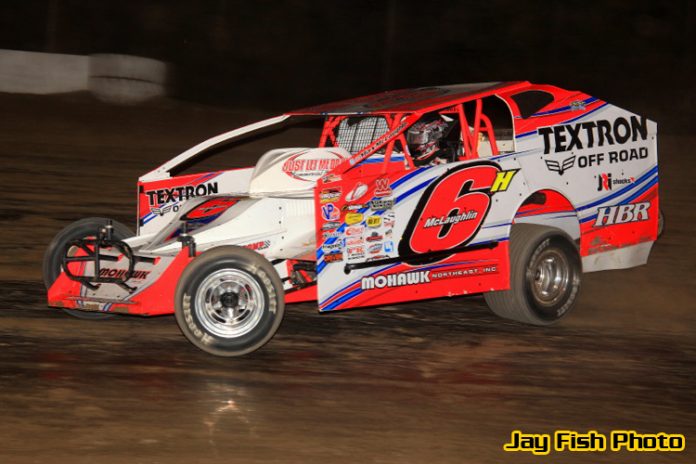 Hulsizer, who started 14th, battled his way to the front before finishing in the fourth spot at the checkered flag. Hulsizer traded paint with the likes of Ward, Decker and Phelps before recording the top five.

He’s had his fair share of struggles on the night and the last few seasons he’s just had plain old bad luck. On Friday, a little poor luck with the draw couldn’t deter his efforts. He hopes it’s a sign of things to come.


“We drew 39 out of 40,” joked Hulsizer. “Hopefully our luck turns around and we continue running like this. Maybe we’ll pick up some wins and stuff. That would be great. This is definitely something to build off of.”

Over the off-season Hulsizer decided to switch chassis manufacturers. After being a long-time Troyer supporter he elected to make the move over to Bicknell for 2017.

“We struggled for a couple years and I had a few people that are big into Bicknell put it in my ear for a while,” mentioned Hulsizer. “We figured what do we have to lose? We tried it and so far we are pretty happy with it. It’s only one race, but even at Outlaw last week it felt pretty good.”

McLaughlin’s night got off to a rough start in the heat before making a 180 degree turn in the feature. McLauglin started 20th and advanced 15 spots to finish in fifth.

“We had a wiring problem where the motor didn’t start in the heat so we went from starting on the pole to last,” commented McLaughlin. “Then we got pretty tore up. We changed the front axle, straightened out the body and changed a bunch of stuff for the feature. It paid off.

“We had a really good car. We started 20th and got up to fifth. In 35-laps that is a pretty good run for us. I really feel like this car is pretty good.”

McLaughlin was solid in Florida, and if not for mechanical issues, they would have continued to be solid upon coming north. He knows he has speed, now he just needs the cards to fall his way.

“After Florida we knew we had something that could win races this year,” stated McLaughlin. “To come here, one of the toughest tracks, to have a good run like that is real confidence booster. We’ll try to keep carrying that momentum and hit it tomorrow at Fulton.”

Mike Mahaney, Jeremy Smith and Gary Tomkins made their Brewerton Speedway debuts on Friday night. Smith was the best of the bunch after securing a 10th place finish. Things didn’t go as well for Tomkins or Mahaney as they finished 12th and 13th respectively in the main-event.

Tomkins was running in the top ten early in the 35-lap feature before becoming the first caution. Tomkins, the 2004 Brewerton Speedway champion, got together with Ryan Bartlett which caused him to get a flat tire. He pitted and worked his way back up through to finish just outside the top ten.

“We had a terrible start to last season,” stated Tomkins. “We are hoping things go better this year. I’m happy to be back at Brewerton. Tonight we rebounded and it didn’t end up that bad.”

The move to Brewerton made sense for the Tom Coar and Chris Clark owned team. The team is based out of Whitney Point, N.Y., but nearly everyone involved in the team works locally. They also have sponsor support in the area.

“We have local sponsors and we all work here,” said Tomkins. “It was a no brainer for us to be here.”

Mahaney, driving for car owners Jim Shear and Cheryl Brady, had a rough and tumble night in the spring time conditions. Mahaney chased the setup on his No. 77x as he returned to weekly action at Brewerton for the first time in several seasons. He ended up finishing one spot behind Tomkins in the final rundown.

The feature was lined up heads up based on heat races with Larry Wight and Pat Ward earning the front row after securing heat race wins, Mike Bowman won the other…

Tim Sears Jr and Bobby Varin were battling for a spot in the top five when they came together exiting turn four. They bounced off one another with Sears pulling off a lap later. Varin brought out the caution after it appeared something broke in the rear of his No. 76. 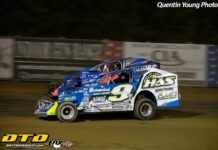 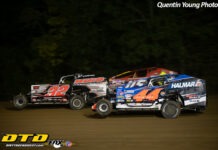 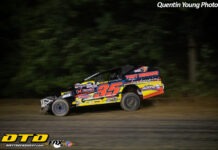