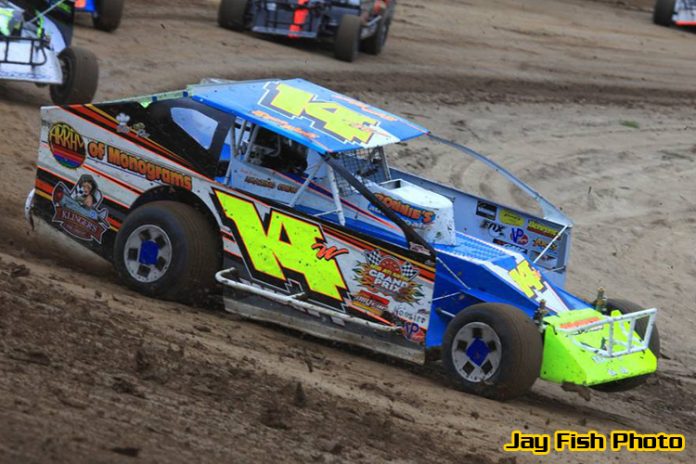 For Pennsylvania native Ryan Watt, big-block Modified starts in Central New York are few and far between. However, Watt found himself in the pits of the Brewerton Speedway for the season opener on May 13th. Watt’s experience at the Oswego County bullring is limited, only having a couple of starts in his career at the track.

A popular question heard throughout the grandstands and pits on Friday was why Ryan Watt, a driver located hours away, would drive past many other tracks to run at Brewerton? Initially, Brewerton was not in his plans, but his path of flight had changed just two days prior to the race.

“With Bridgeport not running this weekend it gave us the opportunity to run elsewhere,” stated the Bridgeport Speedway regular. “We planned on running at Albany-Saratoga and Lebanon Valley, but Wednesday we found out our motor from Enders (Racing Engines) was completed and ready to be picked up, so we switched gears, picked up the engine from their shop in nearby Phoenix, NY and headed over here.”


Brewerton Speedway utilizes Hoosier tires for the Modified division, a tire Watt does not see often in Pennsylvania and New Jersey. The majority of Watt’s competition takes place on American Racer rubber, a tire that differs from Hoosier in many ways. Watt noted the challenge he faces bolting on a different brand of tire.

“It’s definitely different with the car setup, but it’s also a different feel in the seat,” Watt explained. “I’m just so familiar with American Racers, but we ran well on the Hoosiers when we ran them last year. We finished third at Sharon, and a top 10 at Eldora in the Super DIRTcar Series events. However, it’s different coming up here. We’re coming into a track with tires I’m not completely used to running and racing against guys that run here on Hoosiers weekly. It’s a different experience.”

With Brewerton being far away from Watt’s home tracks, the field he faced on Friday was entirely different than the ones he competes against on a weekly basis. While Watt has competed against some drivers in Friday’s field a number of times throughout the years, he had never ran against many other Brewerton regulars.

“The competition up here in Central New York is very similar to back home,” said the Keystone State driver. “They have a heck of a field of big-blocks, we’re only missing two or three drivers and you have the guys that follow the Super DIRTcar Series here. Its tough competition, but we knew that coming into tonight. It’s like, we knew we would be running against them on Tuesday, so why not come run with them tonight?”

Brewerton is an extremely unique track, with a curved backstretch and two very different sets of turns. Along with that, Brewerton is a bullring, with drivers nearly coming to a halt to run the bottom of the tight first turn. A far cry from the big, fast, and wide Bridgeport that Watt competes at weekly.

“Grandview is kind of similar, being a third of a mile,” Watt said in comparison to Brewerton. “It’s a tight, banked track, but it doesn’t have the backstretch Brewerton has and doesn’t get as slippery. We ran the same gear here as we do there, so it’s comparable.”

While Ryan Watt may not be found at Brewerton again this season, the team should be rather easy to find, as they have over 70 races planned in 2017. Follow Watt’s journey this year at https://www.facebook.com/ryanwattracing.