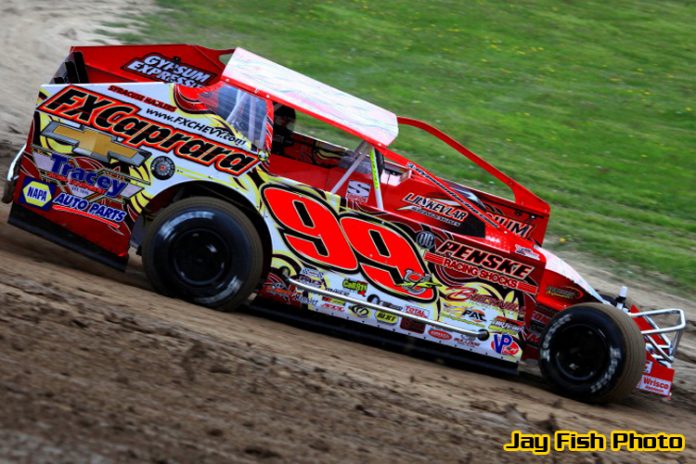 The 2017 big-block Modified regular season is now officially underway at the Brewerton Speedway. Larry Wight scored another victory for LJL Racing Friday night in winning both his heat race and the 35-lap feature event.

Driving through tough track conditions was the key to finishing up front. The track was particularly rough in turns one and two, making for a very challenging corner entry and exit. The hardest part to get through was the middle-to-lower groove, forcing drivers to the very top or extreme bottom.

Wight knows track conditions can be difficult in the first few races of the spring; he said he and the crew worked hard during the off-season to prepare for these conditions.

“We’ve been doing a lot of homework this winter on the car,” he said. “We’re just trying to get it as versatile as we can, you never know what you’re going to get for a track. Seems to be the spring brings out the worst in the track because it’s been sitting all winter.”


Wight also spilled his strategy on cornering on the challenging racing surface.

“The key is to just try and drive straight through it, you don’t wanna really toss the car in – that’s how you hook a rut and land on your lid.”

Wight says he’s looking forward to racing his weekly tracks – Brewerton Speedway, Fulton Speedway and Utica-Rome Speedway – as well as his Sprint Car on Sundays when those events are held at Utica-Rome. He’s also looking to race the Super DIRTcar Series tour.

2016 track champion Jimmy Phelps also had a successful night, posting a second-place finish behind Wight in heat number one and crossing the line in second for the feature with what he said was a strong car.

“We had a decent night; we kind-of banged the car up a little bit both times out but it is what it is,” he said. “The track was challenging, I thought all-in-all we had a really, really good car under us.”

Phelps said he increased the intensity once he got to second, playing a bit of cat-and-mouse with Wight at multiple points in the race.

Phelps as well took notice to the adverse track conditions, but used his veteran knowledge of Brewerton to help guide his car through the rutted clay and get a podium finish.

“You could see the ruts but it’s hard to see at full speed, so you just gotta feel your way in there and when you find a groove that seems pretty decent, hit it every time,” he said. “We found the top was a little smoother in the beginning… then once the pace slowed down and the top wasn’t an advantage anymore, we could creep our way through one and drive off of two on the bottom.”

Phelps also said enjoys the freedom to race from a multitude of starting positions and in several lanes at Brewerton.

“This place – you can come from the back and race all over,” he said. “It’s probably the most fun we have racing anywhere, so that’s what I like most about it.”

Billy Decker completed the podium, coming from a ninth-place starting spot to finish third. He was surprised the racing surface was not as bad as he anticipated, and the ruts did not seem to bother him.

“It’s been wet all spring long; super wet, I’m surprised it was as good as it was,” Decker said. “It was a little damp underneath one and two, and it got a little rough there. It didn’t hurt anything, just had to pick a lane.”

Decker also said he missed out on a few battles for the lead due to the number of laps remaining when he reached the front and wished he had loosened the setup for the feature.