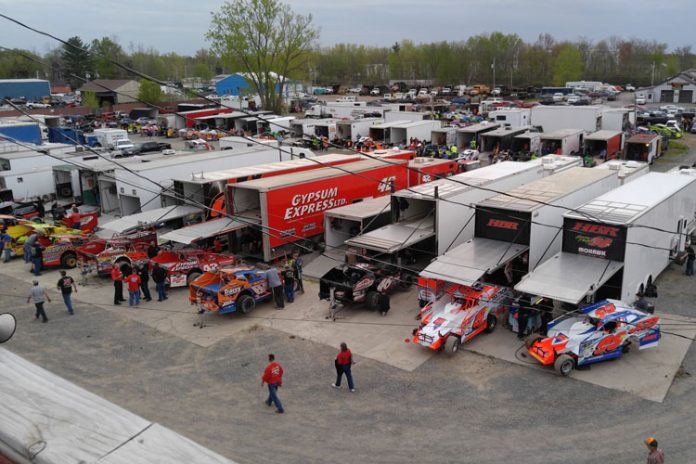 It was good to see the “Welcome to New York” sign last Monday as we made our way home with Jon, but the weather in Tulsa left me yearning for some of their warmth here. Friday was the first event at Brewerton Speedway and what an event it was! Larry Wight won the 35-lap Modified feature in what seemed to be a dominant run, but a few times his competition came knocking on the door when the ruts in turn one broke Wight’s momentum. Alan Fink ran away and hid on the Sportsman field as he found one of the two narrow lines around the ruts in turn one for most of the 25 laps. The week long wet weather softened the substrate too much for the track crew to be able to resolve the rutting, but the track had a ton of bite most of the night which resulted in some great racing in every class and division.

Saturday night was the first point race for the Modifieds at Fulton Speedway. Larry Wight looked like he had a run away victory again, but an untimely caution, as Bill Foley referred to it, gave Tim Sears Jr. exactly what he wanted. The yellow caught Sears up to Wight, and at the drop of the green the topside gave him the lead which he never relinquished.

With 41 Sportsman in the pits for the regular division two features were run. That’s an awesome policy by the track that gives everyone in the division more seat time and a shot at more money. The first Sportsman feature was won by Ron Davis III as he defended his 2016 track title. The second feature was led most of the way by Nick Krause until another untimely yellow took away the straightaway advantage he had over Dave Marcuccilli. Dave used experience and a better handling car to gain the lead and the victory.

On my way into the pits Saturday I ran into Mikey Wight, the novice Sportsman driver who’s healing up from a serious eye injury. I’ve been keeping tabs on him since I heard about his accident, and praying for him to receive a re-creative miracle in the injured eye. God is faithful, as Mikey told me the infection is almost completely gone, the lacerations are healing up, and he can see (which is everything I’ve asked God to do for him up to now). Even though the lens hasn’t been reattached yet, he’s confident that he’ll be back in the racecar pretty soon, and in between eye surgeries his passion to race will be met.


Mikey’s family is holding a benefit on June 11th to help him cover the uninsured medical expenses incured for the treatments and surgeries he needs to get his eye back to normal. They are accepting donations to raffle off and to use as door prizes. Food, music, and a light hearted time is on the card for the event. More information is available from their family, who will be in the pits at Brewerton and Fulton for every event leading up to the fundraiser.

To piggyback on my statement that God is faithful, I’d like to expound on His faithfulness. To be faithful is to be reliable, available, and intentional in the fulfillment of a promise you make. It takes faith to be faithful because you have to be confident that your promise is within your abilities to produce everything necessary to fulfill it according to the standard established by the promise you made. Therefore, being faithful in this context requires you to be full of faith.

God knows who He is. God knows His abilites to perform everything He has spoken. God also has the personal integrity to assure you that He will watch over every promise He has made to perform it for you, if you have the faith to believe Him for it. That’s why I was so encouraged by Mikey Wight’s progressive miracle.

I’ve been experiencing and seeing the faithfulness of God for many years, but never quite like now. Amazing things are happening for people who trust Him in this New Season within the age of His grace. The key to benefitting from His faithfulness is found through a personal relationship with Him as a loving Father, yet holding Him in the highest regard as Lord and King. Listen to what the Prophet Hosea said by the inspiration of the Holy Spirit.

Belief in Jesus Christ, the Son of God, who despised the shame of the cross to redeem us from the curse of separation from the Father for eternity, is the only “work” we can do to receive God’s unconditinal love and unmerited favor.

Once we acknowledge Jesus Christ as our personal Lord and savior, John the Apostle tells us we receive the right to become children of God. Then, as His Word declares, “all His promises are Yes! And Amen!” to those who love Him. I can relate. Have you tried lately? Father is just patiently waiting for you to partner with Him in faith, and in faithfulness to your relationship with Him. The rest is up to Him, and His faithfulness endures forever.

We’re always available. If you need anything email us at flchaplain@windstream.net,
or inbox us on Facebook at our Finish Line Chaplain page.