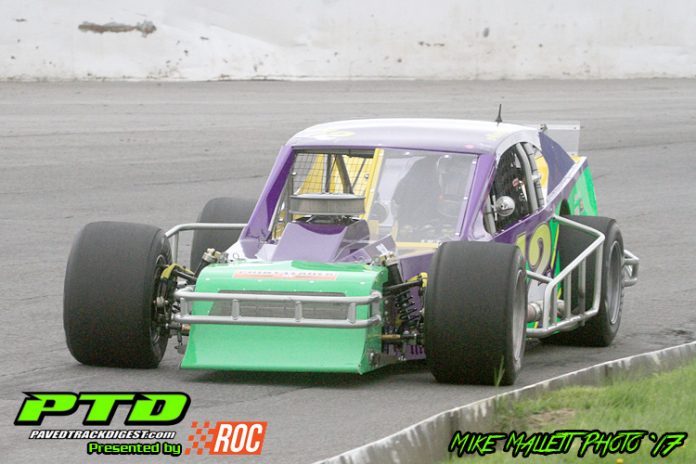 Every now and then in racing you have to make the most of a day that just isn’t going your way. That was the case for Andy Jankowiak on Saturday afternoon at the Oswego Speedway.

Jankowiak admitted after his second place run that his car wasn’t where it needed to be. He struggled in qualifying and in the heat race. In the feature the racing gods smiled on him. He was in the right place at the right time on numerous occasions which helped him get to the runner-up position at the checkered flag.

“Jesus, Buddha or somebody loved me today,” joked Jankowiak afterwards. “We were okay, but we weren’t the second fastest car out there. We weren’t having a good day. We didn’t time trial good at all. I didn’t run well in the heat race. We had some luck, the car was good enough that I could fill holes. We were fighting up there for the lead. We were probably more of a fifth or sixth place car. Everything is going really well and I hope it keeps going.”

Jankowiak is chasing the 2017 Race of Champions Asphalt Modified Series championship. Something he hasn’t in a number of seasons. He’s joined forces with car owners Tom McGrath and Bud Dreher as they hope to reach the pinnacle of the sport. They captured opening day glory at Lancaster National Speedway before his runner-up finish on Saturday.


“We had a heck of a run last week,” commented Jankowiak. “This is a brand new suspension to me. We are still kind of figuring things out. I knew there was going to be some trial and error. I kind of took today as a learning curve day. I told the guys, ‘listen, we are starting in the back, if we can turn the bad days into good days and the good days into great days, we are doing something right’ and that’s what we did.”

The suspension on Jankowiak’s Troyer is something he hasn’t run much coming into the season. The team is hoping to find an edge with the new setup as they learn what works and what doesn’t.