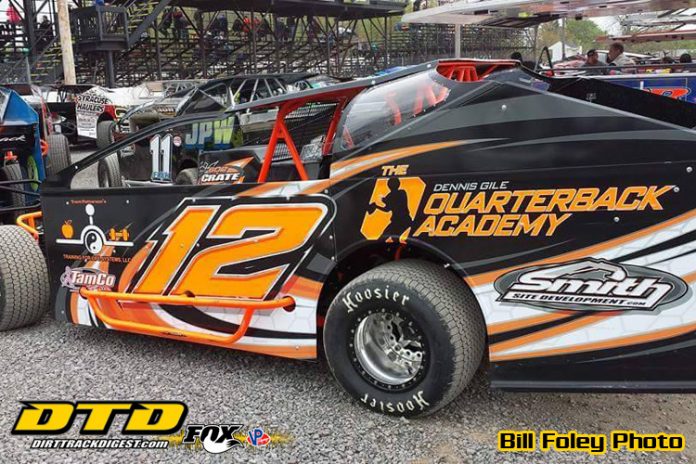 Walking through the Brewerton Speedway pits on opening night there were cars that were there each and every week for the past few years, but there were also a few new ones.

There in the Sportsman-Mod Lite row, behind the line of Modifieds, was a black orange colored Sportsman with the number 12 on the side.

Alongside stood Billy Decker talking to a young driver.

That young, teenage, driver was Darren Smith. He is the son of one of the top Southern Tier Modified drivers and this year a regular addition to the Brewerton Speedway…Jeremy Smith.


Darren is a relatively new driver, but his story is a bit different from others in his division.

Decker was asked if he was coaching him and Billy smiled and said that he was just there to pick on him. However, it was evident that there was some sort of relationship that went beyond busting on the kid.

Smith is a high school sophomore at Sydney High School.

He enjoys racing cars and you can tell he feels quite confident.

In fact, in his first visit to the Brewerton Speedway he was joined by 30 other Sportsman competitors.

He is a rookie at the Demon and the track can be quite unfriendly. Veteran drivers will tell you it takes time to adapt to the unique layout.

Darren noted, “This is the second race of my career as I had my first one at Thunder Mountain. I didn’t race last year, but got to go out and liked it. I decided I wanted to get one and try it.”

He has a new Bicknell under him as he headed out on to the Brewerton surface for his heat and finished fourth, guaranteeing himself a starting spot in the opening night feature. In that prelim he trailed feature winner Alan Fink, Billy Clark and ’16 opening night victory Nick Krause.

You would think with a father like Jeremy who has run for many years on the tough Modified circuit that racing would be primary in Darren’s thought process.

However, that is not the case.

The Smith family has decided that Darren will not accept any purse money racing for possibly the next several years.

Darren could be in a unique situation in just a couple short years.

He happens to be the quarterback for the Sydney High School team and he isn’t your average high school QB.

Darren is proud of his accomplishments on the gridiron and said, “This past year we made it to the New York State semis. I finished the year with 3,000 yards and 32 touchdowns as a sophomore.”

Adding to his numbers he finished his ninth grade varsity season with just over 2,000 yards and 21 touchdowns (only one of which he ran for).

The 6’2” 225 pound right handed quarterback has visions of playing college football thus the choice not to accept any prize money racing.

He is simply racing for experience.

The next night he headed off to Fulton where 41 Sportsmen packed the pits. He could have run with 21 Novice Sportsmen, but elected to run with the regulars.

Though he didn’t fair well in the feature runs he appears to be just getting started as every trip starts with a first step.