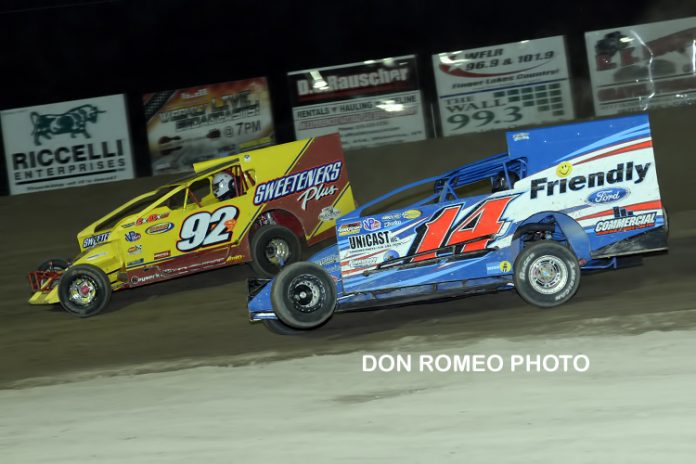 So far in 2017 at the Outlaw Speedway it’s been the Matt and Alan show. Matt Sheppard and Alan Johnson came into Friday night tied atop the Modified division point standings. Johnson had two wins while Sheppard has one.  Now, they both have a pair as Sheppard picked up Friday’s night’s win.  Johnson kept things rolling by finishing second.

On this night Sheppard rocketed to the lead from his 11th starting position while Johnson patiently worked his way up through to get the runner-up position. Johnson didn’t have the little bit of extra he needed to track down Sheppard in the closing laps like he had done in the previous event.


“I think we’ve been pretty much equal,” commented Johnson. “Tire selection has played a little into it. I’m just happy to be a top running car. It’s been a few years.”

Sheppard is still in the infant stages of his new relationship with car owner and driver Vic Coffey. So far it seems like the pair has gelled quickly, which has made it tough for the rest of the field.

“It’s a different animal for us, the whole deal,” stated Sheppard. “Everyone is getting along great. We’ve been working well together. The cars are obviously fast. It’s been great so far. I’m looking forward to doing more of it.”

Although not a different ride, Johnson has seen a marked improvement in his 2017 performance. As he eluded to, he’s off to a great start and is no longer battling for spots in the top ten. Instead he’s racing for wins. He attributed the success to a new motor the team got courtesy of Mark Spoor.

“We bought the motor from Dave Rauscher over the winter,” mentioned Johnson. “It’s just newer than anything we’ve had in the last ten years.”

Johnson’s resurgence has given him even more confidence. Although Friday night he finished second, he was still smiling and joking afterwards. It’s obvious he’s feeling like the old Alan Johnson.

“This feels great and we are paying the bills,” joked Johnson. “It beats coming here and running for tenth the way we had been last ten years until Mark (Spoor) did come along. I told them I was going to quite then he went out and got me a motor so we are back in business. I don’t know if it was a blessing or a curse, but here we are. We are enjoying it.”

On this night both Sheppard and Johnson utilized the bottom of the track. It seemed like every time Sheppard needed an opening on the bottom he found it. He quickly made he was to the front in the 30-lap feature securing the lead on lap nine.

“We set up to do what we did, putt around the bottom and drag race off,” said Sheppard. “It just so happened that the car was hooked up good and guys would slide up off the bottom. We were able to take advantage of that. We kept it there the whole race.”

Likewise, Johnson kept his nose clean on the bottom of the speedway. He took a little more time to get to the front which allowed Sheppard to amass an insurmountable lead.

“You knew it was going to be,” Johnson commented about running the bottom. “He’s (Tyler Siri) been letting it dry out because it’s been so rough. You could tell from get go that’s where it was going to be. I was going to try high in three and four a little bit more than what I did. I don’t know. For some reason I thought Paine was right on my bumper so I didn’t want to wonder too much.”

Sheppard and Johnson will continue their assault on the field next Friday night as they each look to be the first driver to capture three wins on the season.