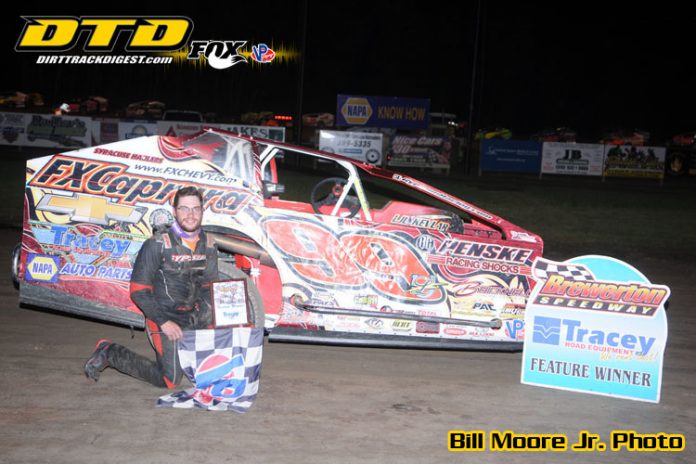 Looking back on the racing weekend I could only summarize what I saw as wild, intense, and wet.

Friday night was wild at Brewerton Speedway as helmet straps cut off the flow of oxygen to the brains of a few drivers. The track was fast, and the ruts from the week before in turn one were trying to resurrect. The track crew did pretty good tackling that obstacle but the continuous rainy start to the season isn’t helping their efforts. By now if you’ve followed the stories of the weekend you’ve read all about the wild ride Mike Mahaney took, and the hockey like body checking (with need bars) between Bobby Varin and Tim Sears Jr. I’m not going to rehash any of that.

The birthday boy Andrew Ferguson had a great run with his new Bicknell chassis with, finishing fourth in His heat and a solid top five in the feature. He followed up with another top ten at Fulton. He’s building confidence in his equipment, and in his team to put him in victory lane this year. Larry Wight capped the night with a gift of a win which he followed up on Saturday by earning his second win of the weekend.

After the dust settled and the social media “experts” analyzed and remarked about everything that happened Friday, I’m sure some changes will be seen going into this Friday at Brewerton.


On Saturday Fulton Speedway was intense with action. The Late Model class put on a great show from 6th place forward throughout their 25 lap feature. Chris Fleming and AJ Kingsley were battling all the way. Fleming used the momentum he found on the top to power his way around Kingsley for the win.

As I mentioned before, Larry Wight was the victor in the Modifieds. The Sportsman Divisions also put on a good show. In the main event Bret Draper led several laps using the top groove, but began to feel the pressure from Ron Davis III about midway through the race. Davis overtook the lead exiting turn two on the bottom as Draper’s front end washed out over the cushion. Davis drove on to win in defense of his 2016 track title.

The Novice Sportsman’s first feature crowned a first time winner as Jimmy Moyer took the lead early and drove very well to hold the lead straight to the end. This driver became the 4th generation of Moyers to win a race at a central New York race track. I had the joy of interviewing him in victory lane, and even though the excitement of his first win was hard to articulate, he did a good job expressing thanks to everyone that has helped him get to the winner’s circle.

Kyle Perry came from last to first like Ricky Bobby to win the second Novice Sportsman feature which rounded out the night’s events. After getting forced into the wall in the back stretch during his heat, the Perry crew had a lot of work to do to get the car back together for the feature. That made the win really special to them. Perry worked his way to the front to race Colby Herzog for the lead. As the laps wound down they swapped positions a few times, but Perry was able to use a run off the bottom of turn four to take the lead back on the final lap to capture his third career Sportsman win, as his first win of the 2017 season.

Sunday a band of Outlaws rolled into Weedsport. The Craftsman World of Outlaws Sprint Car Series invaded the Port with a 31 car field. The DIRTcar Sportsman showed up with a field just as strong in car counts to engage in their own battle. Unfortunately, after the last Sprint heat was being pushed onto the smooth and fast surface the sky began to cry. After a delay to try to salvage the track the rain came down pretty hard so the remainder of the event was postponed until October 15th. If you were there keep your stubs and wristbands as rainchecks.

Before the rain we saw some very fast times with the Sprint Cars running in the high 12’s to low 14’s in the tight oval. Brad Sweet looked like the guy to beat as he set fast time and ran away with the win in the first heat. I’m looking forward to returning for the make up event.

Saturday I bumped into Mikey Wight again, who’s eye is healing very well. We talked about his upcoming fund raiser his family is organizing to help with his medical expenses. The event will be June 21st from noon to 5PM at the Phoenix American Legion Post. Race cars from several teams will be on display, food and beverages will be provided, and raffles with some great prizes will be held to help defray the costs of surgery. I plan on attending and I sure hope the local racing community pulls together to make this a success story.

Traveling from track to track over the years I’ve made many acquaintances and friends in the sport. I may only get to see some a couple times a year because of our schedules, but others I see much more frequently. Through the process of relationship building I’ve discovered who knows someone else I know, which increases the reach of our ministry. It’s exciting for me to be able to serve such a broad spectrum of people from all over the US and Canada. Racers to me are all one big happy family.

God’s family is the same. Universally it’s made up of believers all around the world. We may never meet some until we pass beyond the veil of this existence into the realm of God in Heaven, but the more you travel and stay sensitive to Holy Spirit the more you’ll discover people of like faith.

That’s because the Kingdom of God is built on relationships. He created man and woman and placed them in Eden and had a paternal relationship with them. They are the ones that broke fellowship with God. Even then He devised a plan to restore the relationship. Genesis 3:15 is the first prophetic mention of Jesus Christ.

Jesus Christ built His Kingdom on earth through relationships. He established a way for us to enter into a dynamic relationship with the Father by paying a price that was too high for us to pay, and by sending Holy Spirit to live in and among us to seal the deal established in His sacrificial blood.

Now we get to experience the fullness of God’s love, compassion, mercy, grace, goodness, healing, provision, and power in our everyday lives just by acknowledging and accepting Jesus Christ and what He accomplished for us.

“For the Lord is good; His mercy is everlasting, And His truth endures to all generations. Psalms 100:5 NKJV”

Jesus Christ became the door for us to enter to meet with Father God personally by removing the consequence of sin from us.

“Then Jesus said to them again, “Most assuredly, I say to you, I am the door of the sheep. All who ever came before Me are thieves and robbers, but the sheep did not hear them. I am the door. If anyone enters by Me, he will be saved, and will go in and out and find pasture.
John 10:7-9 NKJV”

Relationships. We all need them. We were designed to experience them. God established a Covenant through the Blood of His son to assure us He could be our first and most important relationship. All other relationships are born out of the love we get to receive from Father through faith in the Son as we fellowship with Them through the agency established with Holy Spirit.

We’re always available and willing to help you enrich your relationship with God whenever you sense it faltering. Just look for us at one of our weekly tracks, or flag us down at a Dirtcar Tour race or one of the many other events we may be at. If you have a sense of urgency or an emegency we can assist you with, we can be reached at Finish Line Chaplain on Facebook, or through email at flchaplain@windstream.net