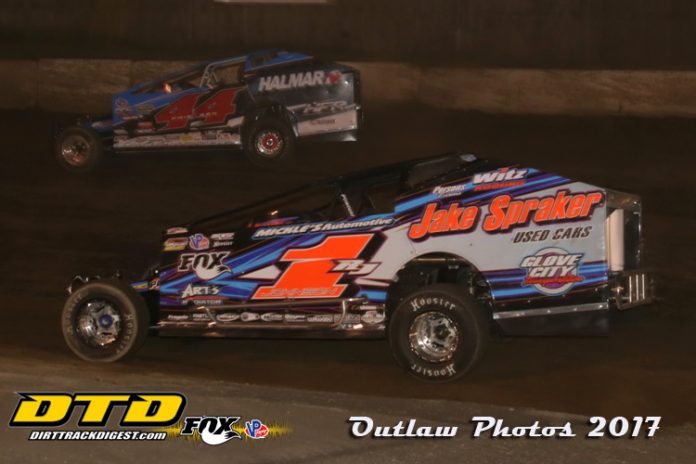 The third race of the 2017 Fonda Speedway regular season culminated with a wild 10 laps to the finish in the 30-lap feature event.

Stewart Friesen came from row three to pick up his second win of the season at Fonda in dramatic fashion, chasing down 2016 Track Champion Ronnie Johnson and passing him with just nine laps to go. Heavy lap traffic was in store for the leaders almost the entire race, as Johnson reached the first lap car by lap eight.

Friesen started sixth and was up to second by the half-way mark, going around Jeremy Wilder. It would take six more circuits before Friesen passed Johnson for the lead, diving low in turn three to take the spot away.

Friesen immediately began to pull away from Johnson a bit, but the battle was not over, as some trouble getting by a few slower cars held Friesen up just enough for Johnson to take the lead back for a brief moment.


“A couple of lap cars got together and I had to make a little bit of an evasive move,” Friesen said. “Then Ronnie got back by and then he got kind-of hung out to dry on the top, working the lap traffic too and I was able to sneak back by on the bottom.”

Friesen regained the lead on lap 27 and drove it the rest of the way to earn his 42nd career victory at the Fonda Speedway, putting him within one win of tying Bill Wimble for eighth place on the track’s all-time feature wins list.

Ronnie Johnson crossed the line second in what he says was an acceptable effort, but a disappointing finish to his weekend.

“It’s not the outcome we wanted but running second to him here isn’t too shabby,” he said. “Of course we wanted to win – it would have capped off a good weekend for us. Looking back on it tomorrow, it’ll be satisfying but right now we’re a little disappointed.”

Johnson lead the opening 20 laps, but trying to go wire-to-wire at Fonda can sometimes be tricky.

“Sometimes it’s tough leading the race because you just don’t know exactly where to go,” he said. “Maybe I made the wrong move and he [Friesen] rolled around me, but then I ended up getting back by him because he got screwed up with a lap car. You never know how them situations are going to go.”

Tim Fuller completed the podium with a third-place run. He lost a few positions at the drop of the green, going from third to fifth before the leaders exited turn one, but picked up the tempo near the end of the race to get the spots back.