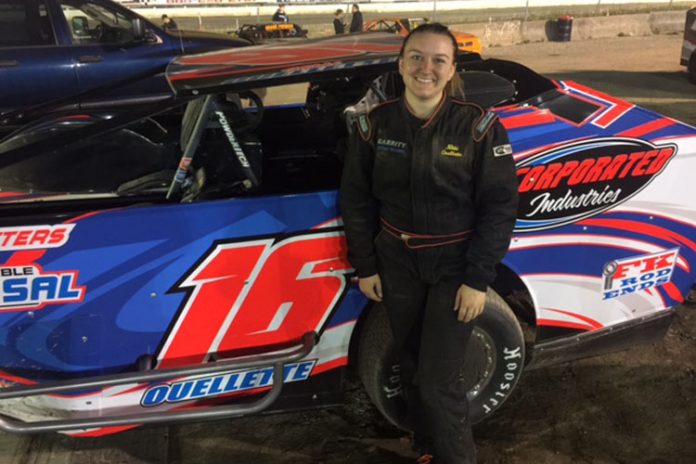 We arrived at Albany Saratoga just as the Modifieds were hitting the race surface. Ronnie Johnson started eighth and wound up coming home with the win. Last season Ronnie waited until September to win the last two Modified features of the season at the Great Race Place. It appears that Ronnie is looking for major improvements in his win column at the track for 2017. One class that is so very popular at so many tracks is the Pro Stock division. Over the years it has grown into a much respected division. Many of the race cars come to the track looking like they are showroom ready. I spoke with Kim Duell, one driver who has done it all at Albany Saratoga. Just to let you know how long Kim has been racing at Albany Saratoga, we were young when he started. As a matter of fact, our first date was at Albany Saratoga where we saw Kim race with the likes of C. D. Coville, Jack Johnson and many of the stars when he was in the Modified division. Kim says, “I still enjoy this sport,” and this season feels he is coming along and sees improvement weekly. Being friends with Kim on Facebook gives us the chance to see how eager he is to get back to the track each week. Our next stop was at a victory lane celebration for the No. 24 Pro Stock of Robbie Speed who is looking at a great start to the 2017 season with two wins at Albany Saratoga and two wins at Utica Rome. On Friday evening the celebration was more than victory lane because it was also Robbie and Chrissy Speed’s fourth anniversary. While with the Speeds we spoke with Chrissy about how well the team is doing this season. She said they attribute their success to a list of things that are checked on the car before each race and it seem to be working if you look at the results.

On Saturday we made our second trip to the high banks of Lebanon Valley for an evening that was jam packed with racing that included the regular show plus held over events from the rain out on May 6th. The first Modified feature was the first event on the track and with ten laps in there was a bone jarring crash on the front stretch involving at least ten competitors bringing a quick response from the safety crew. Much to everyone’s relief everyone walked away unharmed. With the field shortened by ten the remaining 20 laps were run without caution and Brett Hearn took his first feature of the season at the high banks. This was Hearn’s 98th win in Modifieds at The Valley bringing his overall career win record to 896. Brett sits second on the all time win list at Lebanon Valley. At the end of the evening the second Modified feature was run and multi-time track champion and the most winning driver in Valley history, Kenny Tremont was the winner recording his 128th win. The 358 Modified feature ran 24-laps and the winner for the fourth time in his career was Chad Pierce. Chad is tied for eighth place on the all time win list in the division. We have known Chad and his family for many years. It’s great to see people that have supported the sport so long in victory lane.

While roaming through a full pit area I spotted a great looking No. 16 Sportsman race car driven by Nikki Ouellette. When not in a race car Nikki is a teacher at Indian Orchard Elementary School in Indian Orchard, Mass. Nikki has been racing in a Sportsman at The Valley for nearly three years, missing for a time with a broken femur, not from racing but from a figure skating accident. While talking with Nikki she said she has determined that she may have been overthinking her racing. “I can’t think about what might happen I have to just go out a race.” We will be watching her growth in the sport.

In closing we want to send our condolences to the Bob Hart family, a true racing family. To quote his obituary “Bob was a life-long lover of all things racing and speed”.