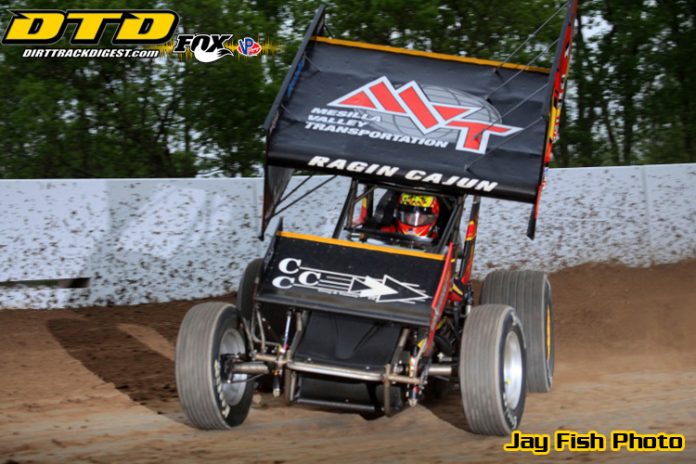 “I enjoy being on the World of Outlaw tour with my wife and little boy. It’s lots of fun and I will continue to do it as along as I enjoy it,” said Jason Johnson as he prepped for the Sunday night rained out show at the Weedsport Speedway.

Known at the Ragin’ Cajun, the Lousiana native had long desired to be a member of the elite drivers known as the World of Outlaws and he finally found a way to make it a reality.

Johnson said, “I ran ASCS National Tour for five years, but needed to make sure I could financially and personally make a commitment. It is a different league and you have to use your finances wisely. “

Continuing he said, “I had won five ASCS titles and it was time for a new challenge. I’m not getting any younger so ultimately the World of Outlaws is where I wanted to be. It is a major step up in competition as they are the best in the business.”


Of his stint in running with WoO he said, “It has been really good so far. We set realistic goals and learned our lessons. It definitely is not easy. We really feel that the goals we set for ourselves are realistic.”

The teams travel to over 100 shows per year and it is amazing how drivers adapt to different tracks, layouts, configurations and surfaces.

Johnson explained, “I really try to keep an open mind when we go to another track. Some nights you win and other nights might be bad, but everyday is a new day. Everyone, the driver and team have to be all in and on the same page every night to win. With 100 shows you have to show up every night to compete. There are no nights off.”

Even though he is not one of the veterans of the tour he has achieved something that many others have not.

Jason Johnson won at Knoxville over Donny Schatz in 2016.

He broke a long win string of domination by Schatz and said, “I don’t think I will ever come down from that feeling. It was something unbelievable. Every driver has a career goal to go along with yearly goals. Well, winning Knoxville is a career goal and it is something that is etched in stone. It was a perfect night and it really helped build our race team as the fans went crazy, but I think if anyone had beaten Donny Schatz that night they would have been just as crazy.”

Johnson talks about being part of the World of Outlaws fraternity. He said, “Coming in I wasn’t intimidated, but it is a respect issue. You need to respect one another and you need to earn the other drivers respect when you are the new guys. This is something I dreamed about since I was a little kid and it has become a reality for me and my family. However, I couldn’t have done it without the sponsorship.”

Priority Aviation and Mesilla Valley Transportation are major sponsors on board that keep him on the road.

Of his short time racing in New York he noted that “Weedsport is one tight and unique first turn, but that the rest of the track can be driven as though it is D shaped. Fulton last year was lots of fun and I’m looking forward to going back there later this year.”

Jason Johnson and the Outlaws didn’t get to complete the show at Weedsport on Sunday night, but in a matter of minutes the #41 was loaded headed out and was traveling east on I-90 headed toward the Tuesday night show at New Egypt in New Jersey. His calendar changed a bit as now Weedsport has been added on October 15 the night after Port Royal in Pennsylvania.