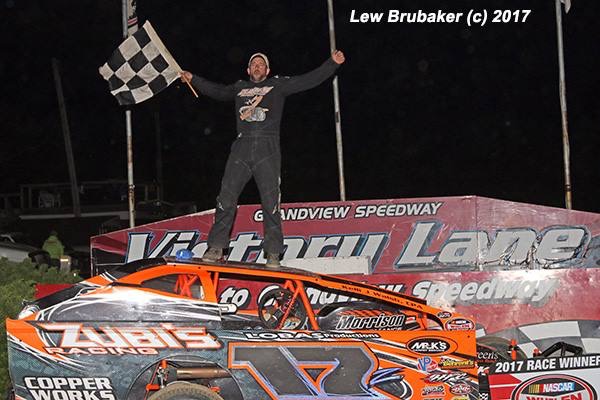 Dave Zubikowski, owner of Zubi’s Racing, is one of the nicest guys you could ever meet. In the pits before or after races, Dave is always willing to chat with anyone who approaches him and introduce themselves to him.  Zubikowsk is also recognized as one the nicest owners in the pits who is always willing to help a fellow competitor when the need arises. The man they just call “Zubi” has been known to lend anything he has to help a fellow team compete whether it be something as small as a tire or something as big as a motor. Zubi is always there to help.

One of my fondest memories in racing is the bear hug I received from Zubi after Brian Krummel won the Eastern States small-block race last season at Orange County Fair Speedway. It was genuine and moment I will never forget.

Three years ago Zubikowski decided he wanted to run Grandview on a weekly basis and hired one the tracks all-time greats Jeff Strunk to pilot his Hig-Fab chassis modified for the season. Strunk and the team had pretty good success winnng a total of five races on the season including a couple of the “Thunder on the Hill” specials.  They came close to winning the track championship. It was the first year that Zubi fielded a team at the speedway and it was a track he really enjoyed racing at.  It was where he wanted to make home on Saturday nights.

After the 2015 season Strunk decided to leave the team and go back to drive for the Glenn Hyneman in the #126 leaving Zubikowski without a driver for Grandview. Eventually Zubi and driver Doug Manmiller would work out a deal for Manmiller to drive for the Zubi’s Racing Team in 2016.  For some reason things never seemed to be able to get on track for the new duo and in June the two parties decided to part ways. Ryan Watt, who was driving for Zubi’s Racing at Big Diamond filled in for a couple of races when his schedule permitted, but eventually Zubi brought in Brian Krummel who was the team’s driver in the Sportsman division at Orange County Fair Speedway where he was having some success. Krummel, who had never driven a car before at Grandview, was thrown into a new and very different style of racing then what he was used to at OCFS. It took Krummel awhile to get accustomed to the slam banging aggressive style of racing on the “Hill” but you could see the improvement week to week and in the season ending Freedom 76 race Krummel battled with the Grandview’s best to a seventh place finish. You could see it was only a matter of time before the driver and team would reach victory lane if they decided to return in 2017.


During the off-season Zubi decided he wanted to return to the Bechtelsville oval and pursue that elusive victory.  He was sure Krummel was the driver to do so. Armed with a brand new Hig-Fab chassis for 2017 that was so beautifully lettered that it was almost a shame to put out on a dirt track the team had high hopes for a successful season. Going into the season with confidence is one thing, putting that confidence to work on the track is another.  On opening night the absolute worst thing that could’ve happened did. Looking very fast in his heat race Krummel had disaster strike. Going down the backstretch at full throttle something broke in the right rear of the car causing the car lay down on the right side and head straight into the third turn wall destroying the new car which didn’t even have a dozen laps on it. It was a vicious hit that took the breath out of the spectators who witnessed it. Despite being shaken up a little Krummel walked away from the crash uninjured and surprisingly was at OCFS the following day to run in the “Hard Clay Open”. It was definitely not the way the team was hoping to start their season on.

Feeling down for sure, the team regrouped and put together one of their other Hig-Fab chassis to run at Grandview the following week. Due to a rash of rainouts that have plagued the northeast modified scene over the past six weeks, the team has just been able to run the car only twice at Grandview with finishes of ninth and fourteenth. Working hard in the garage to get the car right the team never gave up and this past Saturday night their efforts were rewarded when Krummel was able to win his first ever race at the speedway. For both Krummel and Zubikowski it was a dream come true and a very popular win in the crowd and in the pits.

Talking with a still jubilant owner on Monday, Zubikowski still was on cloud nine from Saturday’s big win.

“Man, we really needed that win. It was good for the driver and for the team to get our confidence back. After Brian hit the wall there a few weeks ago, I really did think he had a little fear of going back down there and I think those rainouts actually helped him because his psyche wasn’t there yet.  He said he knew when he got back he would have to pass on the outside in the heat before those guys came up to get him and he went out and did it.  It actually worked. You know when you crash a car that hard you know that when you go by the same spot again you are going to think about it especially when you have to go by it 30 to 40 times a night.”

The transition Krummel had to make from last year driving in the Sportsman division on the “Hard Clay” of Orange County Fair Speedway to the rough and tumble 358-Modifieds at Grandview Speedway was hard to say the least and Zubi couldn’t be any more proud of his driver and what he has accomplished since they made the move last year.

“When Brian started out driving here he admitted that these drivers here just kick my ass, they are just that good. Brian said that when he makes one slight move these guys here just swarm on you like bees both underneath you and around you. It just happens so fast here. But Brian has stuck with it and never got discouraged even after the big wreck.

“I knew this kid could do it, no one in the garage works any harder than he does and it was just a matter of time before he was going to be able to get it done. He’s been playing around with the shocks and we were fast right out of the box on Saturday night. Brian made a few adjustments for the heat race and it was even better.  Then for the feature we made a couple of minor adjustments and it was still fast. Once he got out in front it was a just a matter of not making any mistakes, with a couple laps to go he got in the turn a little too hot and pushed up a little but was able to get it back straight again. He knew the big dogs were coming so he was trying to push it a little to get out to a bigger lead. I just couldn’t be any more prouder of him and the team. I did win here with Jeff but I really wanted to win a race here with Brian because I know how much it means to him and how hard he works to get it done. I have been overwhelmed with the amount of congratulations I have received the past couple of days from everyone. I am just like anyone else in this sport, sometimes it can get you really down but it is the moments like these that make it all worth it.  I want to thank everyone who has reached out to either me or Brian with their congratulations. It really means a lot.”

I know every team who fields a Modified in this crazy sport of ours work their butts off to make their car better week after week so it is really special to see a team or team’s being rewarded for their work efforts. Early season winners at Grandview Kevin Hirthler, Kyle Weiss, Doug Manmiller and Brian Krummel all drive for what I would consider smaller teams and it is nice to see that all their hard work and dedication is paying off for them.

Billy Pauch Jr continued his early season dominance at New Egypt Speedway capturing his third win out of four there on the season . Pauch Jr is definitely on a roll right now at the central New Jersey speedway…

Ryan Godown had a week he would rather forget. After being put back for rough riding in the heat race at the Bridgeport SDS race on Tuesday, Godown was in a qualifying spot in the consi only to suffer a blown motor with only a couple of laps to go. Saturday at New Egypt, Godown was out early in the feature after a tangle with another driver…

Let’s hope Mother Nature cuts us a break this week with a very busy schedule of big show on the horizon for the Modifieds. Thursday it will be round #3 of the STSS South series at Delaware International Speedway for the “Diamond State 50”. Jimmy Horton currently is the STSS South points leader after two races. Friday at Big Diamond Speedway is the rescheduled “Money in the Mountains” BB/SB show. Saturday New Egypt and Grandview Speedways are in action for regularly scheduled events and then on Sunday you have your choice of shows. Grandview Speedway had the “Thunder on the Hill” opener for BB/SB modifieds and at Bridgeport it is round two of the popular “Poker Series”. I for one wish both of these shows weren’t scheduled for the same day so as to not split the teams and the fans…