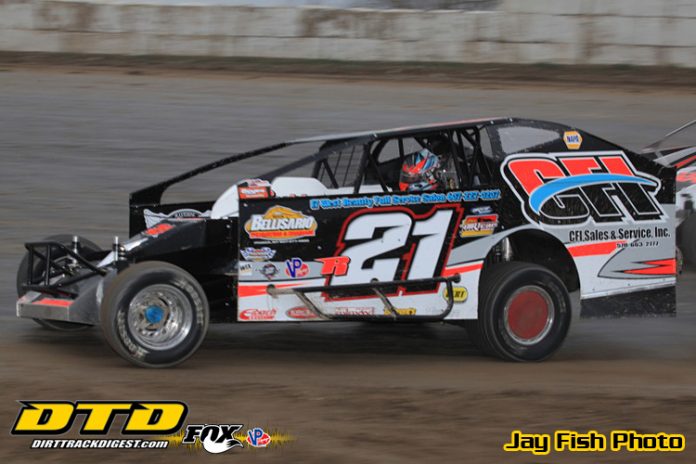 “I just want to get better”, said Modified driver Ryan Jordan when he talked about the reason for shifting his Saturday night racing spot to the Fulton Speedway.

The Hig Fab chassis, Precision powered 21 machine is going to be in the field each and every week at the Route 57 track as Jordan makes his trip from his base in the Southern Tier.

In his four seasons in Modifieds, Jordan said of the change, “I want to learn and improve.”

He knows this will be a big step for the team and noted that many drivers have raced at Fulton regularly.


In addressing his goals he noted with a smile “I just don’t want to make anyone mad at me.”

On a more serious note he said, “If I could eventually get to the top five or ten it would be a tremendous achievement.”

He said, “One major difference I’ve seen already is that the power is incredible. I have raced small-blocks and with the big-block it just rolls over and is so much quicker on the straights.”

CFI Sales and Services along with Uhl Properties are on the side of the 21 and Jordan appreciates their support.

He was a regular runner in the Southern Tier, but noted, “Danny Creeden and some other outsiders are tough, but if I wanted to get better I knew I would have to move on to somewhere else.”

For years he ran Bicknell, but after an accident he had to “throw it (the chassis) away.”

He explained, “I met Jerry (Higbie) and he was a great guy. He has been a tremendous assistance to my program and I decided to go with that.”

Well, he is starting to make strides at Fulton even though he might have made some people mad at him on Saturday night.

Ryan Jordan captured his heat and you can probably bet the seven other cars behind him wanted to be ahead of him, but he’s turned the corner and headed in the right direction.