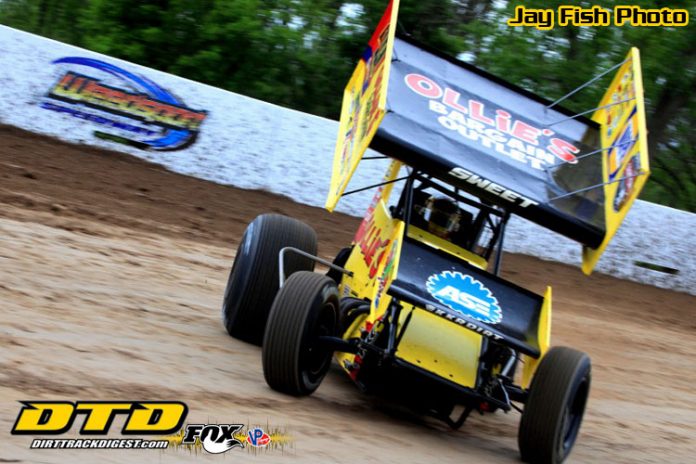 Memorial Day weekend is almost here so it is time to catch up on some late Spring cleaning.

During the past week the World of Outlaws were rained out at the ‘Port, a young driver took a hard Late Model ride, someone got unexpected help in repairing his damaged machine and a few other tidbits were in my notebook that I didn’t get to.

The weather person said rain. Race fans ignore that stuff and simply get in the car and drive. Everyone says, “Maybe it will go west of us” while others exclaim “It will go north”. However, no matter what the diehards longing to see the Outlaws head to Weedsport.


The promotional team has this place sparkling and it was the first time I saw the new restrooms in the main building. I walked in and thought I was going to fall down. I thought water was all over the floor. I was mistaken. The floor was shining and spotlessly clean. This sure won’t drive female fans away.

Standing in line a gentleman asks me where the Outlaw sign in is and I point him one way, but seconds later he is behind me waiting. I introduced myself and he too. For the next seven or eight minutes I was able to interview 2016 Knoxville winner Jason Johnson and finished it up walking him to his trailer.

One thing about the Outlaws is that all the guys I have dealt with in Florida and even at the ‘Port were more than gracious with their time. Shane Stewart was still flying high after his Morgan Cup win at Williams Grove the night before.

Seriously 29 Sprints is pretty good and across the street well over 30 high caliber Sportsman were waiting.

It would have been a good night.

Weedsport threw the schedule out the window and started very early as time trials were over just after 6 p.m. First car out Brad Sweet was the fastest and he was followed by Jacob Allen, Tim Shaffer, Kraig Kinser and Brent Marks.

Two heats got in as Sweet and Allen won from the pole. It was something as I had never seen Allen win anything. In the second heat Allen, Marks and Donny Schatz were the top three while in the first it was Sweet, Johnson and Kinser.

I always search for different stories in the pits and missed one. Parked at the very end of the Sprint car row new the parking lot fence was a white, apparently non or small sponsored 27. Sean Zemunik was the driver. I had never seen him before. To find out he is from Perth, Australia and runs Attica and the Ohio series. Darn, would have been an interesting story.

Local guys were a little off as Stewart Friesen was sixth in his heat, Larry Wight seventh and Mike Mahaney (someone said he had a 360 in it) eighth. It was interesting all the Mod guys were in the same prelim. The trio didn’t time trial very well which was going to put them in a chase mode all night long.

Weedsport seems to attract the best of the Sportsman and it would have been a fun night with the likes of Rocky Warner, Ron Davis III, Jeremy Pitcher, Ricky Newton, Corey Barker, Dave Marcuccilli, Todd and Kevin Root, and many, many more.

Well, you have to give Weedsport credit, but it just wasn’t to be. Usually the Outlaw shows are lost when it rains, but October 15 (the night after Port Royal) they will return. Maybe the snow will hold off (lol).

Dwight Nichols Could be Back

Okay, so someone might say Dwight Nichols is a Novice driver and wonder why it is important he gets some recognition.

Well, two weeks ago Dwight was a victim and his car was heavily damaged.

He appreciated all of the assistance he received from other teams at the track and offers that followed, but one of those offers really stood out.

Dwight will return much quicker than anticipated.

Nichols said, “Rocky Grosso from Syracuse Haulers got me started with my first race car and gave me a shop to share with him. He has always helped me along with things like he refurbished my old race trailer for me. But he has given me everything I need to get back on the track. Everything that was damaged. I wasn’t expecting this much help.”

Continuing he said, “We both share the same love for racing. Without his help I wouldn’t be in racing at all or getting back out on the track.”

14-year-old Max Hill took a hard his in his Late Model at Fulton Speedway on Saturday.

He got up in the marbles and slapped the entrance ramp sideways. He was obviously, and not surprisingly, shaken by the impact and the car was damaged.

His dad Johnny Hill and I were in contact this week. Johnny noted, “Max is fine. He was just trying to run the high line to let the leaders by between three and four and just got too high. He fully understands what he did wrong.”

However, Max is getting support as his dad continued, “Dale Caswell and Kevin Cook reached out to say don’t get down as he was doing a good job, but just got too high. We are thankful for all of the messages and calls with support. He will be back as soon as he can.”

Max had ridden motorcycles and driven go karts and been in the pits since he was eight years old.

Johnny said, “Our focus is to get the car repaired and get him out there to get more laps. He will talk to the other drivers before his next run and let them know he will probably run the bottom if he gets the passing flag or may decide to pull off. We have talked to many of the drivers already and they think he is doing good so we’re going to keep him out there, but keep everybody safe.”

So Johnny and Max get to spend some father-son time in the garage for a while repairing the rear end or putting another roller together.

Buddy and Utica-Rome Race Director John Tiff under the weather. Get well soon John and get back to the booth and grandstands…

Johnny Barker Jr. told son Corey to start going places where others weren’t. He did and Corey finished second at Fulton with a sensational last lap pass….

Keep Sam Carista in your thoughts as he is battling health issues again….

Empire Super Sprints are back at Utica-Rome this week….

Demolition derbies always bring out fans that might usually aren’t there for a regular racing show. Fulton has two demos..a youth and adult this Saturday.

Max McLaughlin noted that the Teo is easier to drive than the Troyer’s he ran in the past. He felt “Troyer cars are good, but they just drive tight. It just doesn’t fit my style of driving”…

When Jeff Sykes beat his team owner Lowell Zehr in heat action for Mod Lites at Brewerton he won by .022 of a second…Mod Lite driver Ryan Halliday was at Mohawk last Friday and his night started badly as a bee was trapped inside of his helmet. He kept driving, but was stung.

Many thanks for the courtesy from the Phelps family (and JoAnn Davies) on Sunday night. I had some minor surgery on my eye last week and was supposed to remain out of the dust. Shannon thank you.

Well, I think I finally cleans out my notebook and if you have any news, gossip, comments etc please write to foley395@hotmail.com