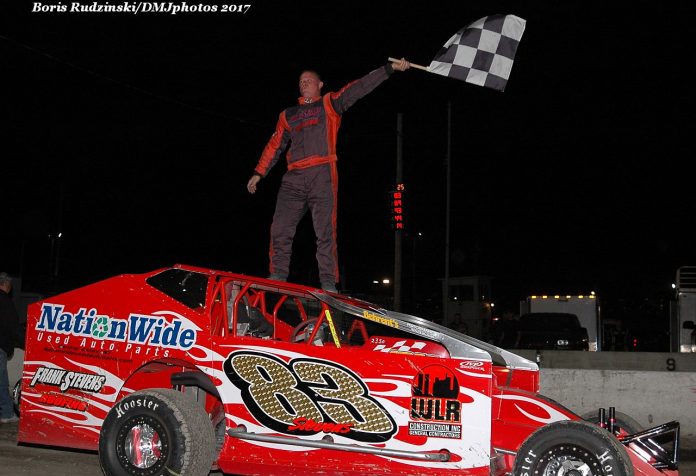 CENTRAL VALLEY, NY- Nearly a week after winning his first career 358-Modified feature at Orange County Fair Speedway, 50 years young Chris Stevens was still in awe of his impressive debut in the 358 ranks at Middletown.

Sitting on the pole for the first 358 feature for the 2017 season at Middletown, Stevens’ 2017 Bicknell chassis had never seen the track before until earlier in the night. Stevens, using JPM power, secured his first career win in the small-block ranks but it wasn’t his first time behind the wheel of an open wheel Modified.

In fact, early in his racing career before life, marriage and kids got in the way of a good time, Stevens was a very competitive go-kart racer. Later in life Stevens wanted to go racing again so he started racing in the open sportsman series and later moved into the crate sportsman ranks.

For the next seven years, Stevens would race throughout the northeast in the sportsman division even competing on the GRIT series tour. In his first four years as a sportsman driver he went winless. In 2016 Stevens won 4 races at Orange County and the year before he clicked off 3 wins. Stevens decided it was time to move up the chain and now is a full fledged small-block pilot.


“Racing against the likes of (Tommy) Meier, (Jerry) Higbie, and the others that race in the small-blocks is no easy task” said Stevens. “These guys have a lot of experience and are able to adapt easily to the changing track conditions and the lap traffic. The real thing for me is that the straightaway speeds are so much more than in the Sportsman division. You hit the throttle and its instantly go. In the feature Saturday I thought I was being a little to hard on the car so I would slow it up and ease into the corners a little more and then open it up on the stretch and it was just really impressive to feel the difference in the speeds.

When not racing on Saturday’s at the “House of Power” you will find Stevens at Accord Speedway on Friday nights where his 20 year old son Kevin is racing in the rookie Sportsman division.

Stevens was certainly all smiles on Saturday winning his first 358 feature at his home track but not far from his mind was a great friend of his who has only a short time left due to a terminal illness.

“Gary Weygant who owns a company that is called Gary Weygant Plowing and Lawn Care. Hes been a big supporter of mine and I dedicate that win to him. He hasn’t been to the races since last year but hes kept up to date on my racing with text messages and from the internet”.

In addition to picking up a new sponsor in 2017, Nationwide Used Auto Parts which is from the same town in which the family roofing business is located in, Stevens uses Fox Racing Shocks, JPM engines, Bicknell chassis, and a familiar sponsor to the racers at Orange County, WLR Construction.

Look for Stevens to race in the 358 ranks at Middletown this year and possibly hit some shows at Five Mile Point and some of the Brett Deyeo Short Track Super Series races. In particular interest for Stevens is the August event at Albany Saratoga Speedway.