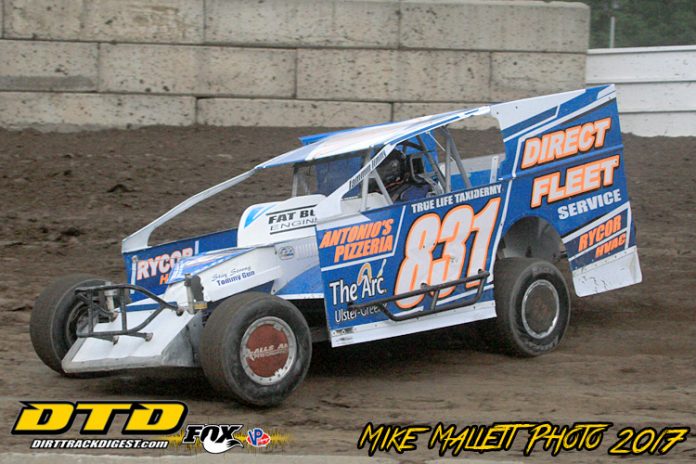 There is always something special about a driver winning their first ever feature. The emotion and excitement of the first one very rarely can be duplicated. On Friday night at the Accord Speedway, Jimmy Wells finally got to experience all that comes with the first win.

Afterwards, the 24-year-old was grinning from ear-to-ear as he was surrounded by family and friends while awaiting his Victory Lane interview.

“I’m excited that’s for sure,” Wells said. “This is awesome. My first Modified win.”

Wells has racing in his blood. The 24-year-old pilot from Rosendale, N.Y., in the nephew of Accord legends Mike and Rich Ricci Jr. Mike was in the pits on Friday serving as the crew chief on the HigFab Chassis car powered by a home built engine.


“It’s a lot of help that is for sure,” mentioned Wells. “He was crew chief tonight. He told me to be smooth out, get the jump and go. The car was perfect. It was spot on.”

Wells has been competing on the track since he was four-years-old. He started his career at Accord Speedway running flat track motorcycles. As a 14-year-old he suffered severe injuries including a broken back. He returned only to suffer a broken wrist that required screws and pins. At that point, his dad had enough and the switch was made to compete in racing that involved roll cages.

It’s a switch that is now starting to pay dividends as he continues to improve behind the wheel. Friday night he started on the pole of the non-stop feature. He led the entire way.

“The pole position was key tonight,” stated Wells. “I was able to get out in front and ride. I was trying to keep it smooth. I was hoping lapped traffic didn’t screw me up.”

There were some challenges in traffic for Wells as he got boxed in a couple of times allowing Ken Ferrier to close the gap. Luckily he was able make the passes when necessary to keep his car at the front of the field.

“I was nervous in traffic,” he said. “I was worried they were going to spin in front of me a couple times. Some wouldn’t move, it was tough.”

At the end, it all played out for Wells allowing him to have a night that he’ll certainly not soon forget.