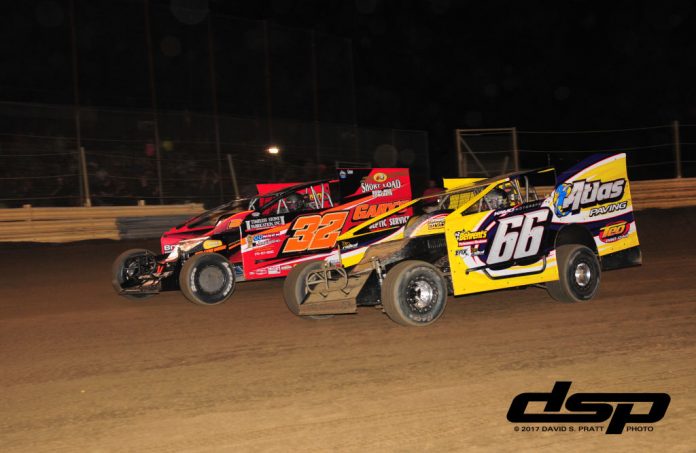 Once again our friend Mother Nature has thrown a monkey wrench into the plans of everyone this weekend. With plenty of big money races in the area for the Memorial Day weekend, rain again put a damper on the enthusiasm of the racers and the fans. The amount of rain-outs the local tracks have had to deal with this season is unprecedented to my knowledge.

Big Diamond Speedway was originally scheduled to open back on March 31st and now going into the month of June they have run a total of two races in the modified division.  That’s a total of 9 possible shows ( 1 week the mods were not on the schedule) with only two being completed. At New Egypt Speedway there have been ten shows scheduled with only four being completed. Grandview Speedway has also had a total of ten shows scheduled with only five being run. The only local track that has seemed to have bucked the trend is Bridgeport Speedway where nine shows have been on schedule and only one show has had to be cancelled.  That show was last night’s second race of the 2017 Poker Series, where they almost made it with only the feature race not being run. All-in-all the first two months of the 2017 season have been a total disaster for the promoters, teams and the fans. Let’s hope that turning the page on the calendar to June will be bringing much better weather to the northeast.

Big Diamond Speedway 5/26/17 – With a stout field of Modifeds on hand for the tracks third attempt at getting their lucrative “Money in the Mountains” annual event in, Mother Nature once again said not today! The rains came as the cars were about to hit the track for warm-ups. Unfortunately the rains never stopped and the track was forced to postpone the event to next Friday night June 2nd. Grandview Speedway 5/27/17 – Veteran Danny Erb was finally able to shake off the bad luck and mechanical gremlins that have plagued the driver in 2017 to take home the big win. Driving the Terry Fanascht owned #44 TEO chassis Erb chased down leader Jon Kellner who was being held up in lapped traffic and made a bold move to take the lead on lap eight. Once in front Erb let everyone know who was in charge on this night as he raced his Nick Gatto powered 358 modified  under starter Ray Kemp’s checkered flag for his third career win.


After having trouble in his heat race and having to qualify through the consolation race, Jeff Strunk was able to charge through the field from his 23rd starting spot to finish second. Kyle Borror continued his strong start to the season to finish third with points leader Craig Von Dohren and Jared Unbenhaurer rounding out the top five.

After five races Craig Von Dohren is your points leader with a small 37 point lead over Jeff Strunk. The ever consistent Jared Umbenhaurer is third, fourth is Duane Howard with Kevin Hirthler in the fifth position.

New Egypt Speedway 5/27/17 – When the season started at New Egypt Speedway all the talk was the two horse race the speedway would have for it’s 2017 Modified track championship between the defending track champion Ryan Godown and Billy Pauch Jr. I have to admit, I was drawn into this as well and it might still turn out to be just that, but after the five features that have been run so far there is another name to be thrown into the ring.

That person is the hot shoe out of Pipersville, Pa., young Danny Bouc. Bouc has been bad ass fast wherever he’s run this year and with a little luck could have a couple of more wins under his belt in 2017. Running his family owned and powered #32 TEO chassis on Saturday night at New Egypt, Bouc came from deep in the field (18th starting spot) to claim his first win of the year. It was Bouc’s sixth win of his young career at the central Jersey speedway in the Modified division.

In a race that took well over an hour to complete, Bouc was able to stay out of the seamlessly never ending string of wrecks that plagued the 40-lap feature early on to take the win. At one point the track had to call a fuel break due to all of the cautions laps that were being run so the cars who were running on alcohol wouldn’t run dry.

Bouc grabbed the lead on a lap nine restart from then leader Steve Davis and never looked back to take the big win in the tracks Memorial Day special “Remember Our Veterans” race. The battles behind Bouc were fierce and at times a little testy! Bridgeport regular Dominick Buffalino finished second with Ryan Godown battling back from an earlier race flat tire to finish third. Billy Pauch Jr. and Johnny McClelland rounded out the top five.

I had a chance to talk to the latest New Egypt Speedway winner Bouc while waiting out the rain at the Grandview TOTH show on Sunday night about his big win and the start to his season.

“Man, it felt really good to finally get that one out of the way. We’ve been really fast all year but it’s  just been second, second every week so it was good to get the first out of the way somewhat early in the year. Like I said earlier, we have been really fast but this week we just had that little extra umph to get the win. The car has been good every week, a couple of weeks ago in the first of the twin 20’s Godown got me and last week Billy (Pauch Jr) got me so it really felt good to finally seal the deal this week and we did it big time.”

The season in total for Bouc has gone very well no matter what car he has been in. Bouc runs his family owned #32 on Saturday night’s at New Egypt and when he ventures out on the road Bouc is behind the wheel of the Mike Bent #88 and it seems no matter what car he is wheeling they have been fast.

“I was really hoping to get to run this car (#88) tonight here at Grandview because we were really good with it here the last time and then we took it to Bridgeport for the Short Track Super Series race which we thought would just be a throwaway race for us since we only had a spec 358 in it running against all those open small-block and big-block cars but we ran really really good (2nd place finish) which was a surprise. But no matter what car we take to the track, we have good stuff and it’s been running really good so I guess we just have to keep at it.”

I asked Bouc how was able to steer clear of all the mayhem during the feature and take the big win.

“It was a real mess last night for sure, they really tore up some stuff. I was just trying to stay out of it for the first 20 laps and then put the pedal down for the next 20. Starting 18th, I was stuck in the middle of it for a little while there. I got into little Billy (Pauch Jr) there early on and everyone was just stacked up all the way through the pack. Then on the one restart I did what I did earlier at Bridgeport and just did a  hail mary around the outside and was able to get five or six guys and that was my break.  Then I was just able to keep picking them off on the outside and got to the lead. By that time we had a nice green flag run going and I was able to burn off some of the fuel we needed to and made it stick. I thought the fuel stop might hurt me but luckily it didn’t.”

With so many rain-outs hindering the start to the season Bouc talked about not being able to get into any kind of rhythm so far this year.

“All these rain-outs are a killer, when you have been fast like we have been you want to race as much as you can but we just can’t seem to catch a break with the weather so far this year. You don’t want to get to the point where everyone else gets rested up and gets better. I surely don’t want lose my rhythm but that’s always a possibility with these breaks the rain is causing.”

With his fourth place finish Pauch Jr was able to maintain his points lead. Due to his win, Bouc moved past Ryan Godown into second place with Godown now in third in the season long standings.

Bridgeport Speedway 5/28/17 – A persistent rain forced the South Jersey oval to throw in the towel for the first time this year during round #2 of the track’s popular Poker Series. The track was able to get in all the qualifying heats before the rains came. As of this writing, no makeup date has been announced for the feature event.

It’s seems like the Pauch / Godown rivalry is back in full force after last Saturday’s feature event at New Egypt Speedway. Only this time it is Billy Pauch Jr versus Ryan Godown instead of his father as they both traded paint on a couple of occasions during the 40 lap feature…

Due to running the NASCAR Camping World Truck Series race this Friday in Dover, DE. Stewart Friesen will not be able to attend the makeup date for the MITM race at Big Diamond. Friesen who had his Halmar/Friesen Racing #44 in the pits this past Friday for the show will probably end up high-tailing it to the Georgetown Speedway after the Dover truck race to compete in the “Deron Rust” Memorial race…

DRIVER OF THE WEEK: Driver of the week honors go to the kid out of Pipersville, PA Danny Bouc for his big win on Saturday night at New Egypt Speedway.