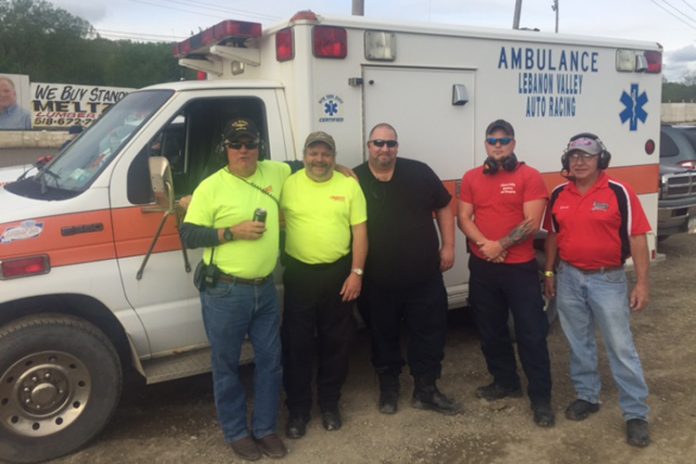 When we enter a race track each and every week we sometimes take many things for granted.  If the racing started and there was no announcer it would be obvious to everyone; if you looked at the flag stand and it was empty that would not be the norm.  However, if there was no ambulance present would you know?  In most cases the answer would be no.  We don’t know whether there is an ambulance at the track unless there is an incident on the track or in the stands that calls for this most important vehicle and crew to be needed.

In looking back through our racing history material from Jane Hacker (first PR person at Lebanon Valley) there was mention in 1953 of the several volunteer ambulance crews that came to the area tracks like Pine Bowl, Burden Lake and Route 66, each week to provide services for the weekly racing.   Racing has evolved and become more sophisticated and so has the ambulance and safety equipment used in racing.  It seems that many times we overlook this most important service and take it for granted. Standing ready to give assistance where needed at Lebanon Valley on Saturday was the ambulance crew consisting of Rick VanDerbeck, EMT and volunteer fireman; Joe Kozloski a professional EMT at E-5 Support an EMS Staffing company that provides EMT’s to volunteer companies; Wayne Smith, EMT and firefighter; Joel Montross a retired firefighter and Vietnam Veteran of the Navy, and Mike Zeigler who volunteers each week as the driver.  In total there are eight professionals that cover Lebanon Valley over the year, rotating their weekly duties among each other.  On the fan side there is another ambulance and on Saturday it was manned by Dylan Sherman another professional EMT with Mohawk Ambulance of Albany and driver Jim Vandenburgh.  Both ambulances are fully equipped N.Y.S. Certified B. L. S. (Basic Life Support) ambulances.  Both can transport or depending on the severity may call on and meet up with an A. L. S. (Advance Life Support) ambulance when needed.

Last season our nephew, Kyle Hoffman took a wild ride down the backstretch at The Valley and this week we spoke with both his mom (sister Joann) and dad (brother-in-law Dick) and was told how glad they were for the great service that was there to help their son after such a terrifying event.  Joann said while some were taking great care with Kyle they took the time to reassure her that they were talking with Kyle and he would be alright.  Many things helped Kyle that night, one being he had built a safe racer and he had some of the very best safety people working on him at the scene.  Whether there was an ambulance there that night was not something Kyle was probably concerned with when he entered the track.  Or like another driver told us this week, “It’s not important until you need it.”  Without the dedication of the ambulance and safety crews at race tracks our sport would suffer greatly, so the next time you get the chance to thank them for their tireless service, do it.


What brought this most important service to light recently for us was when Ed was approached by a crew member with the message that there was no ambulance present at a local Friday night track.  Anyone knowing Ed, knows he is not one to shy away from a safety concern.  After speaking with a few competitors he finally approached a track official with the question regarding the ambulance and was told, there was a staffing issue but it was on the way; but there were cars on the track racing at the time prompting Ed to make the decision to leave.  Before leaving Ed received a call from the promoter and heard language that wasn’t new to him but totally inappropriate in this situation.  This whole unfortunate event is just that unfortunate.

In closing on this Memorial Day Weekend we thank those who gave all and those who are currently serving in the military for their sacrifice for our freedom.