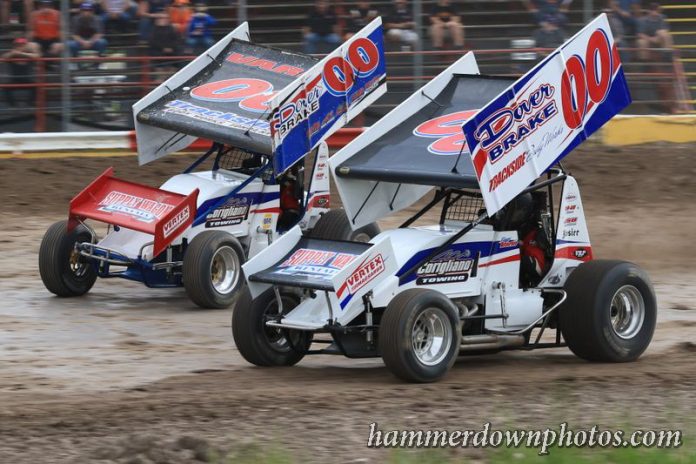 Victory number two in 2017 for the Dover Brake 00 sprint car of Danny Varin didn’t come without a fight on Sunday night at the Utica-Rome Speedway.

Starting from outside of row two, Varin passed runner-up Jason Barney for the lead on lap 10 and never looked back. He made his way through multiple waves of lap traffic but was able to push through and take the checkered flag in the Empire Super Sprints 25-lap event.

“I should have been a little bit smarter there and I should have been a little less impatient,” Barney said. “I knew I had a good racecar but I knew I had guys breathing down my neck and I knew had to clear that lap traffic as soon as possible and put some distance in between me [and Varin] because I thought that we were probably going to go green-to-checkered with the way the racetrack was.”

“It was a little sketchy, there were so many lap cars in the way,” Varin said. “He came off the bottom a little bit and I said ‘well, here’s my shot.’”


“The bottom of [turns] one and two was kind-of the place to be early on,” he continued. “I was able to hit the bite just enough to scoot in front of him and then dive to the outside of that lap car so I didn’t get pinched.”

Varin was also pulling double-duty throughout the evening, driving his big-block modified adjacently to the sprint car; something he considers to be both an advantage and an obstacle.

“I think that being a weekly competitor [at Utica] is definitely an advantage,” he said. “You know how slippery it might get, where it might rough-up a little bit. Doing double-duty, I think, is almost a setback. We’ve got three guys here – one guy handles the sprint car, one guy handles the modified, I jump back and forth. It’s so busy throughout the night, and sometimes you forget stuff. Every car you want to concentrate on so much and sometimes you just don’t have the time to.

“The thinking in general, how to get more bite out of your car – I think it relates to both. Especially the sprint cars,” he said. “You try and get the most bite you can but when the track gets black and slippery and the car starts to slow down, then the wing is less effective and makes a huge impact on the car, and we try to apply some of that to the modified.”

Jason Barney fended off a late-race charge from third-place finisher Coleman Gulick to take the runner-up spot. He said his night did not begin the way he would have preferred, but was able to adjust his car setup and get back to running similar speeds he had at Utica in the fall of 2016.

“It made us go to work. We just went back to what we had here in October, which is a little different than what we won with, but we felt like we had a really good car in October,” Barney said. “We pulled out on the racetrack and I said to my mechanic, ‘we’re in big trouble – get your wrenches out.’ I said, ‘just start turning here and twisting knobs, we’ve got to make some changes or we’re going to miss it here big-time.’”

Barney has six wins at Utica, something he takes a lot of pride in. But those wins don’t come without a great handling racecar and the right crew behind him, which is why he sees Utica as such a challenge.

“I think this is the hardest place with the best competition, and the most demanding place,” he said. “When you come here, you’ve got to have your stuff together completely – car, engine, driver – the package just has to be perfect. This is the only place we come to four times so it just allows you to work on your package and get better.”

Barney had a bit more difficulty in lap-traffic on Sunday, which gave Varin the opening he needed to get by. But they had a great battle around the slick half-mile with no signs of dirty driving. Varin and Barney have a lot of respect for one another, which really showed, both out on the track in their driving styles and in victory lane.

“Somebody like Jason who is so good in the slippery stuff, so good on the bottom, and such a good racer; side-by-side, doesn’t crowd you,” Varin said. “Just a flat-out race – it’s good to take them like that.

“I’m kind-of bummed-out to lose to Danny but he’s great here, I think he’s just as good as anybody. If not, better,” Barney said. “It just came down to making better decisions in traffic and he made better ones. I thought that maybe we had a little bit better racecar, and that’s the discouraging part. But he was just the better driver and the better driver always wins.”

The ‘Iceman’ Coleman Gulick completed the podium with a late-race charge to the front, starting from eleventh position and getting by Paul Kinney and Shawn Donath within the last eight laps. He says he had a car that could have won if it weren’t for his bad luck in the re-draw.

“We were fast all night but the problem with the re-draw is you can draw one or you can draw 12 and we pulled the 11 pill,” Gulick said. “If we start up in front of one of these things, I swear we’re gonna get one.”