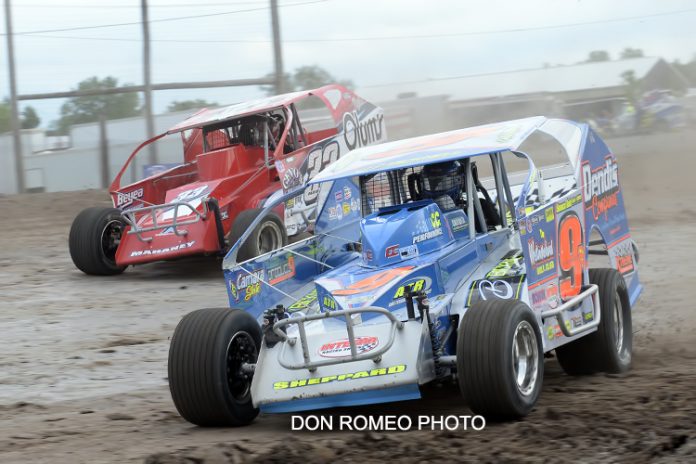 Memorial Day weekend was a great racing weekend in spite of Brewerton getting canceled due to wet grounds. I took advantage of the night off to enjoy a movie with my son. Saturday morning was a wet one but Fulton Speedway was able to prep the track and run a full show plus two demo derbies in record time.

A full field of DIRTcar Modifieds, along with 40 DIRTcar Sportsman, 21 Novice Sportsman, and a pretty good field of 15 Late Models and 15 Four Cylinder Stocks rounded out the regular show.

The action at the high banks is great every week, and Saturday you couldn’t blink or you would have missed something in almost every feature. Chris Fleming looped his car at the beginning of the Late Model feature mid-pack and collected a few of his competitors, doing a decent amount of damage to His car. Chad Homan cruised to the win after taking over the top spot. Kevan Cook was pressuring him all the way, and even swapped the lead with him multiple times, but Homan wasn’t going to be denied his second win of the year at Fulton.

Tom Sears padded his resume with a win in the Modifieds, while two guys got to claim they won in the Sportsman division. The first feature for the Sportsman was won by Jeremy Dygert. The second feature was a blowout as Todd Root ran away and hid by opening up a straightaway between him and the battle for second through sixth once he took the lead.


Two Novice Sportsman feature events also gave two drivers bragging rites. Kyle Perry made it two in a row by winning his second race this year. Steve Marshall was the other winner. Ray Bechler took another win in the Four-Cylinders.

The chaos began after the regular features as Two demo derbies took their turn on the front stretch. 13 year young Alyssa Ingraham win the junior division while Paul Owen outlasted everyone to win the four and six-cylinder demo derby.

All of this in around four hours shows how tight a ship Cory Reed runs along with the great staff at Fulton Speedway.

Don’t forget to clear your schedule from noon to 5PM on Sunday June 11th. That’s when the racing community gets to show some love and support to Mikey Wight at his benefit. A spaghetti dinner will be served at the Phoenix American Legion Post. Some of the ways you can contribute can be donations for prizes for the raffles, displaying your racecars, participating in the raffles, and of course just by being there. The cost is for admission with the meal is affordable and the family is looking forward to seeing you there.

Sunday I enjoyed an awesome service at Abundant Life Christian Center and a quick lunch with my son. We then hit the thruway to Vernon and rolled into Utica-Rome Speedway.

An impressive turnout of 38 Lucas Oil Empire Super Sprints rolled into town to try to tame the Action Track of the East. The regular division of DIRTcar Modifieds filled out to 25, while the DIRTcar Sportsman were 30 strong. The Pro Stocks were an average size field for the track.

Mike Welch won the Pro Stock feature in defense of his 2016 track title. Jim Normoyle looked like the man to beat early on but Welch had plans of his own.

Dylan Westbrook jumped out in front on the start of the 25-lap Lucas Oil Empire Super Sprints A-Main. One mistake erased his lead as he spun in turn two to bring out the only caution of the main. Danny Varin wasted no time to charge to the head of the class and took away the lead Jason Barney inherited from Westbrook’s spin. Danny Varin set a torrid pace enroute to His second ESS win of the year at the Vernon, N.Y., oval.

Matt Sheppard raced from midfield to the lead of the Modified feature to claim his 34th win at Utica-Rome. This win places him ahead of the late NASCAR Hall of Famer Ritchie Evans in all time wins at the track.

The Sportsman division threw a holiday surprise at the field and started all 30 cars. A few early cautions slowed the pace of the race, but once the drivers got into a rhythm they put on a show. Alan Fink held off the late race advances of Matt Janzuk to claim another victory.

Over the weekend I met another multi-car family team at Fulton. They’ve been there all year but I’ve had a lot of new faces to meet after a few seasons on the road with my son. The father and daughter team of Aaron Backus and Kearra Backus drive almost identical Sportsman cars. He races the 46 car in the DIRTcar Sportsman division and she’s in the 46 in the Novice division. At 15, and having never raced before, she’s got a lot guts to jump into a full size race car. She was able to wheel her car to a 2nd place finish behind Kyle Perry in her feature. The Phoenix High School student looks forward to racing every weekend with her dad. From what I’ve seen she’s a quick learner with a big heart. Her passion for the sport should take her far if she chooses to stick around.

I can’t wait for this weekend. More Sprint Cars will be in action as the Patriot Sprint Tour invades Fulton Speedway on Saturday. Sunday the Go Nuclear Late Model series will swing through Vernon to battle on the Action Track of the East, Utica-Rome Speedway.

I’ve said it already this year, but I have to say it again, it’s the people that race that keep me coming back. Sure, I love a good race, but it’s the people doing the racing that makes the race. They come from all walks of life, socioeconomic standards, ethnic backgrounds, and cultures. They all have their own challenges, their own passions, and their own quirks, but God loves each and every one of them the same. Nothing can change that truth.

When God spoke through the Prophet Jeremiah to Israel He said “The Lord has appeared of old to me, saying: “Yes, I have loved you with an everlasting love; Therefore with loving kindness I have drawn you. Jeremiah 31:3 NKJV”

Since Jesus Christ came and paid the penalty for all of humanity, for the Jew first, then the Gentile (see Romans 1:14), this truth applies to all mankind. Everlasting is never ending, or eternal. How can our eternal God love us for eternity unless we are also eternal beings?

The answer to that is simple, yet not what most would expect. The bible clearly teaches the triune God, Father, Son, and Holy Spirit, created us in His likeness with three distinct parts. We’re a spirit, because it is the Spirit of God that gives us life. Our Spirit is the essential person. Our soul, symbiotically tied to our spirit, is the seat of our reason, intellect, and emotions. Our body is the organic biochemical encasement of our spirit and soul.

Our Spirit is eternal because it was God breathed (see Genesis 2:7). Our soul is eternal, providing the expression of our personality as our spirit wills. Our body is organic, made from the earth, and therefore is bound to the limitations of time and space. We use our body to navigate the earth under the authority of our spirit.

With these things in mind let’s go back to the everlasting love God has for us. Our eternal spirit is what God sees when He looks at us. He also looks at the results of how we govern our soul and body With out spiritual authority. When we feel a tugging in our heart toward Him, it’s because His lovingkindness is tied to our eternal life, and we feel drawn to Him by His Spirit because our spirit sensed,the depth of His love toward us.

So why do so many people deny Him the privilege of a relationship? Free will allows us to govern our soul and body however we choose, but sometimes we get that out of balance and allow our soul or body to rule over us. When we do, we fall into the trap of our enemy. Reading Genesis 3:13 closely you can see how jealous the serpent was of mankind because God has such a deep affection for us. His jealousy led to such a cunning plot that he twisted the very words of God to deceive the woman and man into disobeying God. Verses 13-24 reveal the consequences of their collective disobedience.

Hidden away in verse 15 is something great. As God scorned the serpent He revealed His plan to redeem us from the consequences of that event.

“Then the Lord God said to the serpent, “Because you have done this, you are cursed more than all animals, domestic and wild. You will crawl on your belly, groveling in the dust as long as you live. And I will cause hostility between you and the woman, and between your offspring and her offspring. He will strike your head, and you will strike his heel.”
Genesis 3:14‭-‬15 NLT’

Her offspring that the Father was referring to is none other than Jesus Christ. When Satan over shadowed the crucifixion, he bruised Jesus heals as the Roman spike were driven through them into the cross. When Jesus Christ returns in all His glory and authority, He will defeat and cast down Satan once in complete finality. Prophetically speaking of this verse, the head represents authority, and when Jesus Christ rose from the grave He stripped Satan of his authority over humanity, metaphorically crushing his head.

Way back in Eden when the first man and his wife messed things up for us God demonstrated His love for us by revealing His plan to redeem us from the authority that Satan tricked man into surrendering to Him by disobeying God.

The final blow to Satan has yet to be thrown, but today we are free from the bondage of his oppression because our Champion already defeated and disarmed him.

“You were dead because of your sins and because your sinful nature was not yet cut away. Then God made you alive with Christ, for he forgave all our sins. He canceled the record of the charges against us and took it away by nailing it to the cross. In this way, he disarmed the spiritual rulers and authorities. He shamed them publicly by his victory over them on the cross.
Colossians 2:13‭-‬15 NLT

That’s the everlasting love of God in action! He became what we are, to receive what we deserve, appeasing the wrath the Father has in store for ungodliness, and in so doing set us free. Our only roll in this is to acknowledge Jesus Christ as our personal Lord and savior and fully trust in God to raise us up in the last days just as He raised Jesus Christ from the dead. Then our true self will be reunited with the Father in His house.

If you ever need anything email us at flchaplain@windstream.net, or inbox us at Finish Line Chaplain on Facebook. Until we meet again always remember the true Champion and His accomplishments, because you get to enjoy the prize.