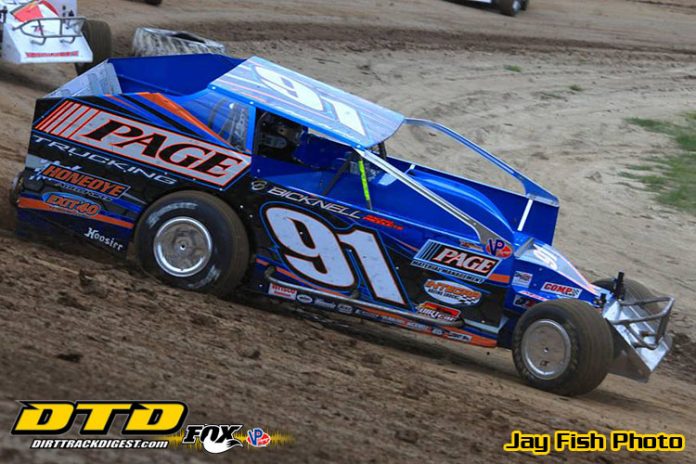 What a race it was for the ‘Franklin Flyer’ Friday night at the Brewerton Speedway. Billy Decker came all the way from the 14th starting position to win his 60th feature race at Brewerton.

Decker’s night began with a solid effort in heat two and a second place finish, which put him in the 14th starting spot due to the handicap points system.

The 35-lap feature began with Jeremy Smith grabbing the early lead from pole-sitter Mike Mahaney. Smith would lead through lap 20 when he reached lap traffic and eventually surrendered the lead to a hard-charging Decker on lap 27. But the battle was not over there, as Decker and Smith would swap the lead back and forth several times until a yellow came out on lap 30 for a slowing Jim Witko in turn three.

On the restart, Decker would pull away from Smith and runner-up Tom Sears to collect the feature win.

“We had a good racecar all night,” Decker said. “We were pretty balanced the whole night, the car worked out really well. We got a few breaks in traffic that probably made us look better than we were but we had a great racecar, and that makes it even better.

“I’ve raced here a long time and it’s always been a stiff crowd and tough competition, and it certainly feels good to win here,” he added.

Tom Sears finished in the runner-up spot from a fifth starting spot and said he appreciates the work that’s been getting done to the racing surface, making for a much easier time with cornering.

“You could actually race through the ruts this time and move around a little bit,” Sears said. “You didn’t have to try to stop and avoid stuff.”

Sears said he found his winning setup at Fulton last week to also be a great combination at Brewerton. He and Jeremy Smith were engaged in a side-by-side battle for second place during the last five laps, which was a very hard-fought yet clean race – something Sears said he always loves to see in his weekly trips to Brewerton.

Smith completed the podium with what he said was a solid racecar. He said he made a mistake getting into turn three that cost him second place, but was glad to have a good battle for position with Sears.

“Tom’s a good runner, he’s going to race you clean,” Smith said. “He gave me the outside line and some room to race so that made it fun.”