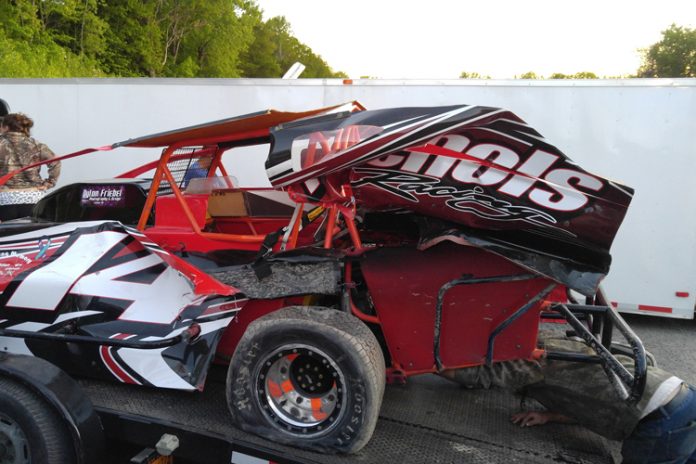 It was nice to be back at Brewerton after a two week weather induced break. It was chilly but dry as the pits filled up with all of the regular divisions. The track crew worked all night to keep turn one under control and did a great job. The clay underneath was still wet because of the week long rain but the power harrow and packer trucks kept it under control as well as anyone could.

The Mod-Lite feature was one of the best races I’ve seen all year with only 0.3 seconds between first and fourth place at the line. There were four to six cars in the mix battling for the top spots for the entire 20 laps. Josh Kinney came out on the top of the heap at the line for the win. Ray Bechler took another win on the season in his Four-Cylinder Stock.

Another great race took place in the Modified division. A multi-car incident on the front stretch at the beginning of the race shuffled the field around, but after they were given the green flag, the drivers got into their rhythms and the race was on. Billy Decker came from his 14th starting spot to the front and took over for the win. Tyler Trump won his first Sportsman feature at the D Shaped Dirt Demon for the 2017 season. More detailed information of the event can be found in the official press release.

Saturday my son and I went down to the Syracuse Quarter Midget Club to watch some of the USAC North East regional racing series. It was fun to hang out and watch the kids race on the largest .25 Midget track in the United States. We enjoyed seven years of racing there as a family. Later in the night Jon shared with me how much that period of his life meant, and how much it helped him develop in character and in many other ways, not excluding as a race driver. If you have kids that want to race quarter midgets are a safe, fun, and highly competitive racecar to get them started.

After we left the NY State Fairgrounds we headed up to Fulton Speedway for the Patriot Sprint tour and regular divisions minus the Four-Cylinder Stocks. The track was in great shape and blackened up throughout the night. I stayed pretty busy in the pits so I didn’t see many heat races. I did see the aftermath of one hard hit as Dwight Nichols was hit in the left rear by Kearra Backus in their heat. Dwight was sore but alright after the Backus right front came into the cockpit hitting him in the shoulder. Kearra was pretty shaken and concerned for Nichols. The drivers spoke and hugged in the pits and went about their night. That’s the kind of sportsmanship I love to see.

Soon to retire from Sprint Car racing, Bryan Howland lunged from his first row starting position to take the lead that he would never relinquish. Bryan was a very happy man in Victory Lane. Larry Wight raced his way up to second place, with the Cobra, Chuck Hebing, racing his way into third place. Tim Sears Jr outraced the field to take over the lead and held on for the win in the Modifieds.

Two first time Fulton Speedway winners in the Sportsman division celebrated in Victory Lane together after their respective interviews were over. Michael Phelps claimed his first ever win in the first feature by driving away from the field from his front row starting spot, as did Jessica Power in the second feature. Both knew they had to be smooth and consistent to fend off the competition, and both accomplished that goal. They also both earned an extra $20 each by winning their heat races, courtesy of Larkin Mowing of Oswego. The other heat winners claiming the extra cash were Jeremy Pitcher and Chris Mackey.

Dale Caswell padded his resume with another Late Model win over Kevan Cook and Chris Fleming. The Novice Sportsman winners were Tom Juno and Stephen Marshall.

Upon arriving at the gate I ran into Mike Emhoff, the Patriot Sprint Tour director. He informed me of two things he wanted to pray about in their drivers meeting. First, Darryl Ruggles and his family are grieving through the loss of his nephew. Darryl, Wendy, and the entire family appreciate your prayers during this time. Stephen Glover, another Patriot Sprint driver was hospitalized for an internal illness. Let’s all keep them in our prayers.

The benefit for Mikey Wight is this coming Sunday at the Phoenix American Legion Post. The ten dollar admission includes a spaghetti dinner. Raffle tickets will be sold, and prizes awarded, all to raise funds to help Mikey pay for the surgeries his eye requires to be fully healed. He was able to turn a few hotlaps in his car Saturday and hopes to return to the seat full time very soon. That’s what God can do. From doctors telling Mikey they needed to remove the damaged eye to them changing their tune to say they can repair it, all within the 48 hours I met his family and began to pray for his complete restoration. Miracles still happen because Jesus Christ is the same yesterday, today, and forever.

Sunday was a wash as both Utica-Rome and Weedsport felt it was prudent to save traveling teams a lot of time and money, which was the right decision by both tracks. Moderate to heavy rain blanketed the whole area both tracks are located in.

I enjoyed a dynamic message from God’s Word at Abundant Life Christian Center in East Syracuse before having an encounter with God at a Texas Roadhouse during lunch. It was quite amazing, and brought me much joy to obey Him in that setting.

Many people think they have to make sacrifices to enter into a relationship with God. The mindset so common is “I’m not ready to give up _______________”. (You fill in the blanks). The truth that most miss is that God loves you as you are, where you are, doing what you’re doing right now. He may not approve of or appreciate some of the decisions you’ve made or are making, and the actions tied to them, but that doesn’t change the reality of His love never ceasing. He looks at the essence of who you are, and loves you for you, separating your behaviors from His intentional love.

“… the Lord does not see as man sees; for man looks at the outward appearance, but the Lord looks at the heart.”
I Samuel 16:7b NKJV”

He would rather we learned to hear His voice and obey the instructions He gives us as we move along life’s journey, than make sacrifices for the sake of cutting deals with Him.

We as a progressive society should be way beyond the mindset of earning our own way into heaven. The Bible teaches that sacrifices other than that of Jesus Christ himself are fruitless. Nothing we can do, other than believe and trust in what Jesus Christ already did can fully please the Father anyway.

That’s why the simplicity of the Gospel (or good news) of Jesus Christ is so confounding to some people. They can’t wrap their minds around something that can only be captured in their hearts.

“For with the heart one believes unto righteousness, and with the mouth confession is made unto salvation.
Romans 10:10 NKJV”

Some,peolel haven’t grasped that other than our faith in Christ we don’t have a roll in our achieving own right standing with God, He did it all.

“For He made Him who knew no sin to be sin for us, that we might become the righteousness of God in Him.
II Corinthians 5:21 NKJV”

Many still haven’t figured out that we don’t have a roll in paying the debt of our sin, Jesus paid it all to purchase our eternal life as a gift to us.

“For the wages of sin is death, but the gift of God is eternal life in Christ Jesus our Lord. Romans 6:23 NKJV”

We don’t have a roll in securing our own place in heaven, He secured us for it.

“In Him you also trusted, after you heard the word of truth, the gospel of your salvation; in whom also, having believed, you were sealed with the Holy Spirit of promise, Ephesians 1:13 NKJV”

We can only hear His message and believe it, receiving the fullness of the promises, proclaim our belief, and apply it by faith, which is another gift He gave us.

“For by grace you have been saved through faith, and that not of yourselves; it is the gift of God, not of works, lest anyone should boast.
Ephesians 2:8‭-‬9 NKJV”

God knows us better than we know ourselves in some ways, so He covered all the bases of our doubts and questions by making the way to Him as simple as possible.

Of course, we’re always around to answer questions you may have. We’re always seeking ways to be intentional in God’s love. We can be reached through our email account at:
flchaplain@windstream.net or through the inbox at: Finish Line Chaplain on Facebook