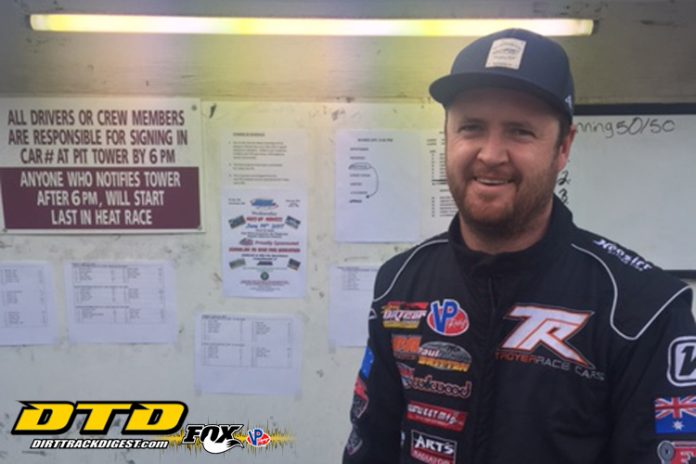 On Friday it was back to the Great Race Place. With over 160 race cars we knew we were in for a great night of racing. While standing at the line-up board the driver of the Andy Romano owned No. 97, Peter Britten came to look at the evenings line ups and we checked with him on his travels to Sharon Speedway in Ohio on Saturday nights. The trip is four hours from his home and the trip this week was going to be five hours back to Weedsport for the special show on Sunday. He is pleased with how he is doing at Sharon and thought his car is running well enough that he should have won the first night. Peter is leading the points at Albany Saratoga by two points over defending champion, Marc Johnson. We then spotted Devil’s Bowl Speedway promoter, Mike Bruno talking with recent race winner at Devil’s Bowl, Chad Edwards. Chad was very happy after winning the biggest event of his career last Sunday when he won the King of Dirt Series event at the Bowl. We are sure car owner, Tommy Spencer was just as happy with the win. We spoke with Mike briefly and asked how things were going at his track. He said he is doing all he can but can’t do anything about the weather.

When the third Modified heat came to the track announcer, Dan Martin began listing the many generations of racing that were represented by the participants. Fourth generation driver, Bobby Hackel IV, third generation drivers Keith Flash and Bodie Bellinger and second generation drivers Rich Ronca and Neil Stratton were racing side by side just as their fathers and grandfathers did at many of the same tracks. The Pro Stocks were running a King of Dirt series event and after the 30-lap battle for the honors, one fan favorite, Kenny Martin stood in victory lane with his familiar No. 93. Alongside Kenny in the victory lane photos was his father, Ken, Sr. who also raced at local tracks like Burden Lake, White’s Beach and Lebanon Valley back in the 50’s and 60’s. Kenny Martin’s son Sheldon is a former competitor at Albany Saratoga making the Martins’ another three generations of racers. We congratulate Sheldon on his recent engagement. He currently lives in North Carolina.

Also on Friday we had a change to enjoy one of the things we like most about our sport, seeing a driver win for the first time at a track. Jeremy Wilder in the No. 22J picked up his first career win at the Great Race Place. He is one talented driver and we knew it was only a matter of time before he found victory lane. Jeremy started in the fourth position in the feature and fought back all challenges from fellow competitors; he is a thrill to watch. After the event we spoke with one of his fans, Ray Evans a long time race fan who said he had not been that excited since his days as a loyal Lou Lazzaro fan. Ray mentioned to Jeremy that he was so close to the wall there was only room for a piece of paper between his car and the wall. Jeremy said at times you couldn’t fit the paper.

This season Sowle Truck Repair has stepped forward with eight race dates for the Sportsman winner to get an extra bonus in their envelope. On Friday Dave Constantino won the $1000 winners prize in the second of these events. Dave was driving his DKM No. 7. As many know Ed has been in recovery from alcohol for over 43 years. In 1974 he started a new chapter in his life and during that time his travels to racing events was limited as he put his life back together. He can happily say it worked. On Sunday we had a change to look back at a 1974 racing event, the opening and running of six races at the Cairo Fairgrounds Speedway in Cairo, NY. Sunday’s event, the Cairo Fairgrounds Racing Reunion was held at the Angelo Canna Town Park in Cairo. Those attending Sunday’s reunion enjoyed looking at restored race cars, photos of the six events, and sharing stories and memorabilia brought by fans and racing enthusiasts. One of the very dedicated fans who brought some of his memorabilia was John Yaroschuck of Greenport, NY. John brought just three of the many albums he has full of collectible tickets, photos and race records. In this photo Ed, Lew Boyd and John enjoy reminiscing while gazing back at history.

Opening the reunion was a photo presentation by Joel Naprstek, freelance illustrator, race car art, who had a treasure trove of photos he took as an amateur photography at the opening events for the speedway. Closing out the day Lew Boyd, author and president of Coastal 181 motorsports books, did a presentation of feature winners at Cairo Speedway adding his unique touch that included stories of the drivers that raced at the six events. Five drivers were in attendance on Sunday to accept their awards, they were Rich Ricci, Sr., Jim Fugel, Dough Tyler, Stan Wetmore and Mert Hulbert.

Sunday’s event was put together with great care and attention paid to the historical value of racing in Green County. This is all thanks to the Cairo Historical Society, Sylvia Hasenkopf, acting president and the Hudson Valley Historical Racing Committee, Roger Liller, historian/secretary. We thoroughly enjoy our day at the reunion and thank all of those that contributed to the success of this once in a lifetime event.