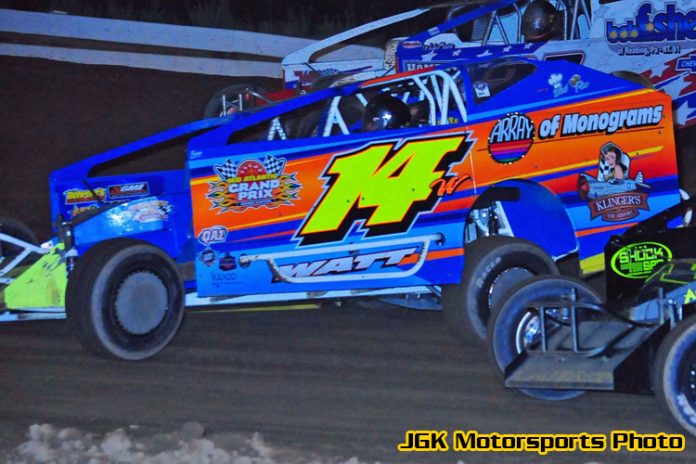 Finally a weekend where the big story of the weekend wasn’t the weather. For the first time this season I think all four NJ/PA speedways were able to run on their regularly scheduled nights. Unfortunately for myself I wasn’t able to visit any of the local dirt tracks this weekend as I spent the weekend down in Dover, Del., to attend the NASCAR triple header weekend. Being the dirt racing enthusiast that I am I was able to make it to Brett Deyo’s Georgetown Speedway to take in the “Deron Rust” Memorial race to get in my dirt fix.

With most drivers electing to go with their open small-blocks or their 358 spec motors, Watt was one of only a few drivers that choose to utilize a big-block motor on the night. It was the same strategy Watt utilized last season in winning the 2016 STSS “Anthracite Assault” when he choose to do the same thing. Watt who admits that he feels more comfortable running the big-block blasted from his sixth starting position to take the lead from Duane Howard on lap three and was never headed form that point on. Big Diamond regular Rick Laubach, driving the Ryan Kerr owned #1K on the night was able to put some pressure on Watt in the second half of the race but Watt was up to the challenge and eventually put a safe distance between himself and Laubach to take the big $6,000 payday. The win by Watt also guaranteed him a spot in the STSS race scheduled to be run on Tuesday. (The race has since been postponed to Sunday 7/16 due to rain)

Following Watt and Laubach across the line were Ryan Godown, Duane Howard and Jeff Strunk. After failing to qualify through his heat race and winning the consi, Craig Von Dohren put on a nice show for the fans coming from his 21st starting spot to finish in the sixth spot driving his normal Friday night modified the Dave Dissinger #88X. Rounding out the top ten were Jared Umbenhaurer, Jimmy Horton, Brett Kressley and Ryan Grim.

Strunk who made it known last Saturday that he was hungry for a win when he came from a consolation starting spot all the way to second wasn’t going to be denied on this night. Mike Kellner gave Strunk all he could handle trying to hold him off, but Strunk was finally able to squeeze by to take home the win.

Kellner grabbed the lead early in the 30-lap feature event and looked to be the man in charge but Strunk was on the move early on and into the top five when the caution flew on lap five. A couple of laps later the “Bechtelsville Bullet” was into second and starting to put the pressure on Kellner. Kellner was running a great race running the preferred line and was able hold off Strunk lap after lap unitl lap 28 when Kellner ran into turn three a little too hard and Strunk was able to get underneath and emerge as the new leader. Once in front it Strunk pulled away to the victory. Kellner ran a great race to finish second followed by Ray Swinehart, Craig Von Dohren and Duane Howard.

Craig Von Dohren remains the point’s leader over a closing Jeff Strunk. Jared Umbenhaurer, Duane Howard and Doug Manmiller round out the top five in the season long quest for the track championship.

New Egypt Speedway 6/03/17 – Billy Pauch Jr remains the man to beat at the  New Egypt Speedway taking home his fourth win out of six starts on Saturday night. It doesn’t seem to matter where Pauch Jr starts his Rick Holsten #96 in the feature as he always manages to get it to the front quickly and even more importantly before his toughest competitors can do so. Talking to one of Pauch’s toughest competitors I was told that even though their lap times are pretty much equal, it is the way that Pauch is able to maneuver his car through traffic and the way the car handles coming through the field that is the biggest difference right now.

Saturday night was just way it was described above as Pauch Jr was able to get to the front before any of his rivals to take the win. It looked early on that this was going to be Bryan Kuhl’s night as he was able to build up a good advantage on the rest of the field. After last week’s feature that took over a hour to complete it looked like this week’s feature was going to run non-stop and be over in less than 15 minutes. Unfortunately for Kuhl that scenario didn’t materialize and the caution was thrown lap 23 to bring the rest of the pack to his back bumper.

Pauch made easy work of Kuhl on the restart to take the lead and speed off. Another caution flag was thrown shortly and on this restart Ryan Godown was able to slip by Kuhl and into the runner-up spot. Godown was able to keep pace with the high flying Pauch Jr but never had enough on this night to make a serious challenge for the win.

Pauch grabbed his fourth checkered flag of the year at the speedway followed by Godown, Kuhl, Steve Davis and Willie Osmun.

Bridgeport Speedway 6/03/17 – It had been over five years since Mike Barone had last visited victory lane at Bridgeport Speedway but the way the Hillsborough, N.J., driver had been running this year you knew it was a matter of time before he would put it there again. Barone has had a few strong runs throughout the early part of the season letting everyone know that he was going to be a force to reckon with before the year was out.

Last Saturday night turned out to the night the drought would end as Barone drove his Lombardo Engines powered, Bicknell chassis Modified to the win over defending track champion Ryan Watt. Barone inherited the lead early on after early leader Bob Sarkisian dropped from the race with mechanical issues to his car.

Once in front, Barone led the balance of the race to take the big win. Watt moved into the second spot just before the halfway mark and was able to put some pressure on Barone but Barone never moved off of his line and was able to hold off Watt to race under the checkered flag. The win for Barone was his second career victory at Bridgeport.

After Barone and Watt it was Rick Laubach in third followed by Jesse Hill and Neal Williams to complete the top five.

As stated in last week’s article, due to running in the NASCAR Camping World Truck Series race at Dover International Speedway, Stewart Friesen elected to race Friday night at Georgetown Speedway instead of returning to Big Diamond. The decision paid off for Friesen as he was able to pass Jamie Mills with only a handful of laps left to take the big win.

DRIVER OF THE WEEK: With his big win on Friday night at Big Diamond and a runner-up finish on Saturday at Bridgeport this week’s honors go to “Flying” Ryan Watt. The Boyertown, PA driver is starting to get it rolling and is looking forward to the upcoming big races this summer.