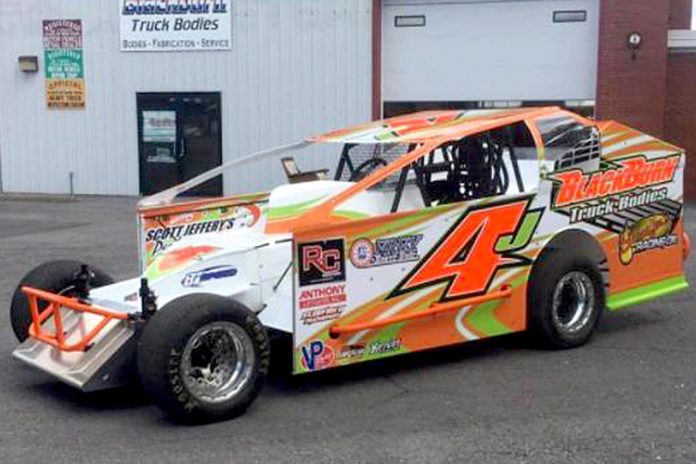 Sitting in the grandstands you see the 4J driven by Jeff Blackburn out there in the Modified feature and he is one of the older new drivers in Central New York.

Last Friday night Jeff Blackburn returned to the Brewerton Speedway with a new, to him, Bicknell chassis with all new shiny parts.

Jokingly he said, “It looks so good that I’m not sure I even want to take it out on the track.”

That glib moment nearly proved to be a bit foretelling as he went out and pitched the car into one. The left side stood up and then when it appeared to settle down the right side tires dug in and it appeared he was enroute to a car demolishing barrel roll flip, but luckily the car settled down and rested on all fours.

Blackburn had caught a lucky break.

However, a lucky break isn’t something new for the owner of Blackburn Truck Bodies business on Thompson Road in Syracuse.

But as Paul Harvey use to say, “Now the rest of the story”.

Nearly 37 years ago Blackburn had some potentially tragic news when for some unknown reason he became sick.

Blackburn noted, “In 1979 I came down sick and when diagnosed the news wasn’t good”.

He said, “My liver was failing and no one was sure why, but it was the size of a baseball when it should have been about the size of a deflated football.”

Talking about that time he noted, “They found a good match and I had the transplant on May 2, 1990,”

He remembers, “Just 10 days after the transplant I was well enough to walk out of the hospital.”

But the battle isn’t over.

Jeff explained, “I go to Boston twice a year for tests. I am living life, but some of the medicine which is an anti rejection medicine is impacting my immune system causing some cancer on my forehead and hand.”

However, he continues to live life to the fullest, whether it be in his successful business, travel with his wife Nancy or racing.

Fans who have been around the D Shaped Dirt Demon for any number of years are quick to remember that Jeff once drove a sharp looking Mod-Lite.

He said, “Jeff Hayes got me involved in Mod-Lite racing”.

Well, Hayes has moved on and is settled in his camp on Lake Ontario on weekends, but Blackburn has the racing bug and he keeps going.

Despite the fact that “Purple Hayes” has left the sport other than to visit the pits from time to time, Blackburn keeps his focus and commitment to the sport very much alive.

He departed the Mod-Lite division after nine years and now is entering his third complete year in the Modified division.

Fans, for the most part, have no idea what racing teams do in order to be on the track every weekend.

Jeff explained, “My wife Nancy is so great. She will go to bed at 11 o’clock, I’ll call her before she does and I haven’t even left the garage yet.”

After working all day in a business that does custom work on truck bodies, dump trucks, lifts and blades and being involved in aluminum fabrication with his son Ryan, he heads off to the garage.

Jeff Blackburn is appreciative of those who support and assist him.

He credits his son Ryan along with Terry Friend and wife Nancy with getting him to the track and though his major sponsor is his own Blackburn Truck Bodies there are others who support including Frey Heavy Duty, R.C. Industries, Anthony Liftgates, Schaeffers Racing Oil, Scott Jefferies Performance Plus and Flewby U Transport.

The team got a later start on the 2017 than anticipated.

Jeff explained, “We didn’t have much time in the winter and spring because of our jobs and we were moving our business. We had a place on 7 North, but found a bigger building on Thompson Road. We moved for three weeks in April and then opened our new business, which includes a storefront, on May 1. Then we could go to work to finish the 2013 Bicknell and everything on it is new. We are ready to go now.”

Well, he made his debut last Friday night at the Brewerton Speedway, kept it on all fours, finished one lap down in 18th place in the 23 car field and then rolled it back in the hauler in one piece.

No one knows if he will ever win a feature race, but in a race of life he is definitely a winner and more importantly is living to the fullest.