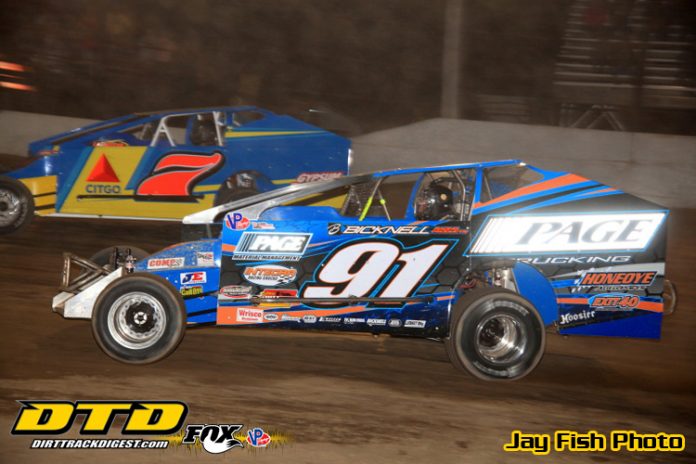 Billy Decker rallied from his 17th starting spot to win his second feature in two consecutive weeks at Brewerton Speedway Friday night. Prior to his feature I had a moment to talk to him. I was curious what he might view as the highlight of his storied 34 year career and his answer was simply “every win is good.” The last two weeks at Brewerton have been good for the Pace Trucking team in that regard.

Almost two years ago following the Wednesday Super Dirt Week event at Weedsport Speedway I wrote in my column to keep your eye on a certain young Sportsman driver. Friday the same driver started 11th in the feature and patiently worked his way to the front to claim his first regular DIRTcar Sportsman division win. Zack Sobatka comes from a racing family, and he’s already had an impressive career since the age of five coming up through quarter midgets. This win was special to his family because it was his first win at Brewerton and his first in the DIRTcar Sportsman division since moving out of the Novice Sportsman two and a half seasons ago. I couldn’t resist congratulating him in victory lane because of all the help, stiff competition, and friendship Zack and his family have extended to us through the years.

Once again the Mod-Lite teams came to put on a show for the fans. This time it was a race for second through sixth that kept the fans on the edge of their seats as Casey Sykes drove away leaving everyone else in hot pursuit. Unfortunately for Sykes, after three attempts over the scales, he couldn’t make minimum weight. Mike Mullen was the benefactor of Sykes’ misfortune, receiving the win by default.

Chris Bonoffsky took the lead on lap two and never looked back to win yet again in the Four Cylinder Stock feature.

Saturday night was perfect. The weather was warm and the track at Fulton Speedway was quick. I didn’t get to see some of the features so you’ll have to read all about them in the press release here on DTD. Other things were happening at the track that caught my attention, but one was of special interest to me.

Vince Vitale has been building a sharp looking 360 Sprint Car and finally got it out for hot laps. Unfortunately after three laps the Donath Motorworks power plant appeared to have blown a head gasket as Vinny throttled down and headed for the pits with a lot of smoke pouring out of the right side of the motor. Larry Wight looked like his hands were full as he hot lapped his Sprint Car without the wings in preparation for the Wingless Shootout at Weedsport on the 26th of this month.

Sunday I drove out to Phoenix N.Y., to attend the benefit for Mikey Wight. The family is really grateful for everyone that came out to support Mikey to help with the medical bills he’s accumulating for the treatments and surgery to his eye. It was cool to meet more of his family and friends, and to see the Lord’s faithfulness in action as Mikey’s eye is healing better and faster than his doctors expected. Let’s keep him in prayer until this whole experience is just another success story of God doing what God loves to do for us.

During a conversation with a driver Friday the Lord began to speak to me about the burden he was carrying about one of his family member’s health. As I listened to the driver explain the challenges and treatments his family member had needed, the Holy Spirit began to remind me of a scripture verse that became the foundation of my ministry at the race tracks.

“Therefore, since we are surrounded by such a huge crowd of witnesses to the life of faith, let us strip off every weight that slows us down, especially the sin that so easily trips us up. And let us run with endurance the race God has set before us. Hebrews 12:1 NLT”

The driver’s openness allowed me to share that scripture, explain how it applied to his situation, and I was able to give him some encouragement and practical wisdom that can be used in any and every area of his life.

Notice the phrase “strip off every weight that slows us down”. The burdens of life can redirect our focus pretty quickly. When we carry a burden too long the gravity of the situation can become too heavy a weight, which hinders our progress toward the things our focus was shifted away from.

Race cars are kept as close to the minimum weight requirements on purpose to allow the power plant more ease at creating speed. Speed on the race track equates to progress that allows a driver to pass other cars. In other words, the less weight a race car carries the easier it is to move forward, in theory.

Our minds are much like that. The heavier our burdens become the more it upsets the balance of our biochemical body’s functions. The neuroelectric pathways in our brain begin to send negative signals that affect the functions of the body’s organs and tissues. Lightening our emotional load and speaking from a positive perspective, regardless of our circumstances, can actually reroute and recreate new pathways through the brain that rewire our mind. The result is better rest, sleep, peace of mind, and confidence.

What do we do with those weights we’re carrying? The Apostle Paul told us.

“Give all your worries and cares to God, for he cares about you. 1 Peter 5:7 NLT”

If you really learn that God cares about you, it will be easy to begin “casting all your cares [all your anxieties, all your worries, and all your concerns, once and for all] on Him, for He cares about you [with deepest affection, and watches over you very carefully]. 1 PETER 5:7 AMP”

The same verse in the Amplified Bible gives us a clear and accurate look at the original language Paul used to describe how and why we can hurl our worries at God and trust Him to deal with them. The word “casting” really means to violently hurl something. That means our prayers can be genuine expressions of the emotions we need to release while we ask and trust God to deal with what is burdening us.

In another passage Jesus Christ used the analogy of taking His yoke upon ourself. Read this aloud and listen to the language Jesus used.

“Take my yoke upon you and learn from me, for I am gentle and humble in heart, and you will find rest for your souls. For my yoke is easy and my burden is light.”
Matthew 11:29‭-‬30 NIV”

In the days of ox drawn equipment a yoke was used between animals to equalize the work load. When a weaker untrained young ox was being taught, a strong experienced ox was yoked with them to pull the majority of the load. That gave the weaker ox a chance to adjust to the yoke, and to develop new strength without risking injury to the animal.

Jesus was simply saying ” hook up with Me. I’ve got the strength to carry this for you while you learn how to handle it. I’ll give you time to grow and strengthen you for this, but until then let’s do this together so you don’t get hurt through the process.” Our faith in His ability to carry our burdens for us allows us to strip off those weight and run our race with endurance. After all, the lighter you are the further you can go with the fuel you have in your cell.

Don’t get to the place your worries, problems, or anxieties are too much to bear. Jesus Christ took them upon Himself on the cross, carried them to His grave, and buried them. When He rose they stayed buried. His promise is that we, through faith in Him, are raised to a new life which promises victory through Him. You’re never alone. Just look at your problems and confidently say “relax self, God’s got this one.” If we can help reach out, we’re tied to His lifeline and are always available if you’re facing more than your heart or mind can bear.

Email us at flchaplain@windstream.net or reach out on Facebook at our Finish Line Chaplain page.